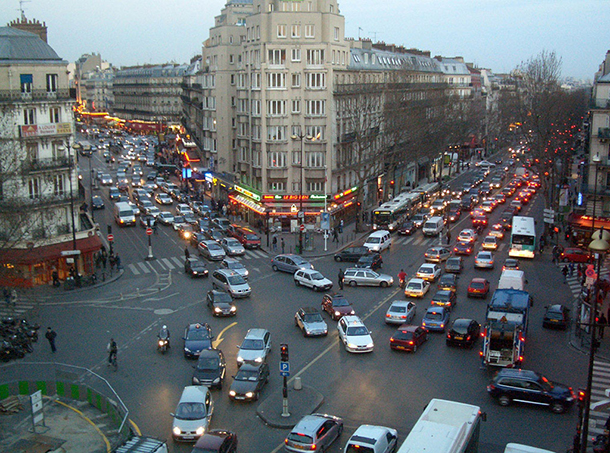 To reduce pollution in Paris, recent regulations ban cars built before 1997 from the city center during workdays. This move is expected to reduce emissions of particulate matter and nitrous oxide, a major public health issue in the city. Host Steve Curwood speaks to Hervé Levifve, a transportation expert in the office of the Deputy Mayor of Paris.

CURWOOD: Paris is famous for many things -- fashion, art, cafes and revolution. And now it’s created a new kind of revolution. The City of Light went car free for a day, on September 23, to allow Parisians to stroll down the Boulevards of the city center, and get to the Eiffel Tower and Arc de Triomphe without choking on fumes. It’s part of a wider attempt to fight pollution that now bans cars built before 1997 on the city’s streets during the busy part of weekdays. We called up Hervé Levifve, a transportation expert in the Paris deputy mayor’s office to find out what the ban actually covers.

LEVIFVE: The new car ban will affect any vehicle who is driving inside the city of Paris from motorcycle to heavy goods vehicles. Since the first of last July this year, cars manufactured before 1997 cannot be used in Paris from Monday to Friday between 8 a.m. and 8 p.m. Our target is to remove, from day to day, circulation all pollutant vehicles used for commuting, but people can still use old cars during the weekend. 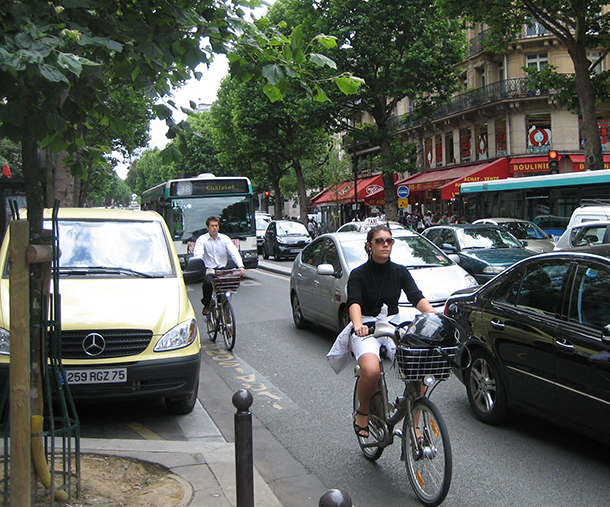 Paris has created incentives for commuters to replace their old cars with bicycles or public transportation. (Photo: Eurist e.V, Wikimedia Commons, CC BY 2.0)

CURWOOD: Now how bad is the air in Paris? I know that one point a couple years ago it had the worst air of any city on the planet, but to what extent has that persisted?

LEVIFVE: Today we have some survey, which says that half of citizens of Paris are exposed to a bad quality of air. We know also for sure that every year 2,200 people are dying because of air quality. It's the sole cause of death in Paris just after alcohol and tobacco. We are not complying to European standards, limits. Half of the citizens of Paris are largely above the European limitation so we need to do something.

CURWOOD: Now, how much of this air pollution do the older cars cause?

CURWOOD: In other words, the older cars cause twice as much pollution kind of on average compared to newer cars.

CURWOOD: So how are these new regulations going to affect the environment do you think? How much pollution can you reduce?

LEVIFVE: We know for sure that we will reduce emission of NOx and particulate matters until five percent or above, but this is only the first step and there would be other steps next year to ban diesel vehicles in 2020.

CURWOOD: So, no diesel vehicles at all inside the city of Paris by then?

LEVIFVE: Yes, that is the objective.

CURWOOD: Well, how does the steps that you're taking in Paris compare to what other cities are doing in Europe? 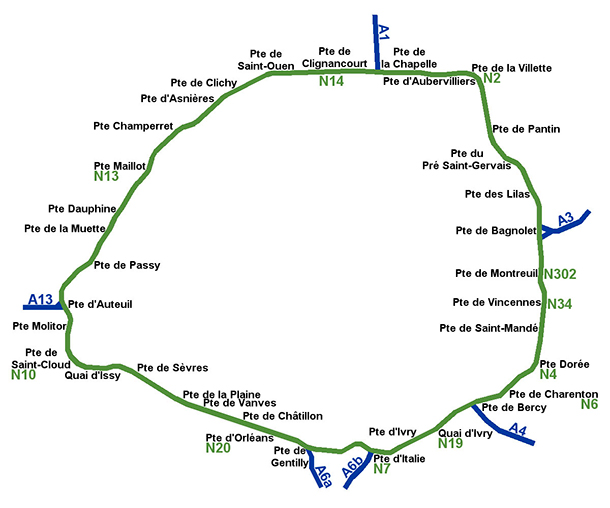 LEVIFVE: We are quite late in Paris because since 20 years now, there was about 200 low-emission zones in different cities in Europe, sometimes it was very big low-emission zones, like in London it was 1,700 square kilometers. Sometimes it’s very tiny like in some cities in Italy. But today in Paris what is different is that we are banning all types of vehicles, from motorcycle to heavy goods vehicles. A lot of other cities in Europe are only focusing on heavy good vehicles or motorcycles or light vehicles.

CURWOOD: How are people reacting to all of this?

LEVIFVE: Parisian people are very very few motorized. Only 40 percent of households in Paris has a car. So, a majority of the population of today is respiring bad air quality and few people are using cars and polluting. And so, even if some people are quite upset because they will not be able to use their car anymore, the majority of people are very happy that we are doing something against pollution.

CURWOOD: So, a minority of folks are making bad air for everyone right now.

CURWOOD: What kind of incentives is the city offering to help people comply with this?

LEVIFVE: We have two kinds of incentives. The first one for Parisian people is an incentive when you get rid of your old car, you can have some funding for public transport, for buying a bicycle, electric bicycle, or something like this. We are not helping people to buy a new car. And for professional activities like plumbers, like deliverymen and so on, we have some incentives to help them to buy more clean vehicles.

CURWOOD: So, what kind of exceptions, if any, are there?

LEVIFVE: There are some exceptions. For example, disabled people who need the car, can use the car if it's before 1997. For example, also vintage car have special authorization to be used in Paris.

CURWOOD: So, what are the other actions that Paris has tried to limit pollution from vehicles?

Residents of Paris will still be able to use cars built before 1997, like this Lincoln Town Car, at night and on the weekends. (Photo: Bull-Doser, Public Domain)

LEVIFVE: There is a lot of action about mobility. For example, we have a very huge plan to promote the use of bicycles. We will spend 150 million Euros until 2020 to create bicycle lanes, to create parking stations for bicycles. Today we have five percent of people using bicycles today. Our goal is to have 15 percent of people using bicycles, so we will triple the number of bicycles in Paris. Our plan is to remove some lanes for cars and replace them by lanes for bicycles in order to make it more safe and so on. For example, in Paris there is a motorway along the Seine River in the center of Paris.

LEVIFVE: This motorway will be closed for cars beginning next October, it will be replaced by pedestrian and cycle ways. We also have some projects about public transport with a new cable car, with new hybrid transit inside Paris and a lot of little things like this.

CURWOOD: Hervé Levifve is with the Deputy Mayor for Transport in Paris, France. Thanks so much for taking the time with us today.

LEVIFVE: Thank you for listening to me. Bye bye.

Interactive map of other urban access regulations in Europe

The official website for the Paris car regulations (in French)