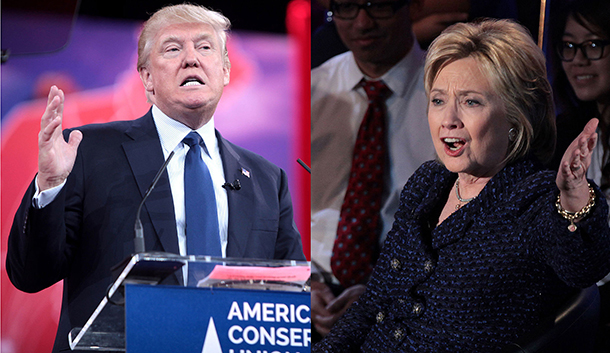 Presidential candidates Donald Trump and Hillary Clinton went head-to-head in the first debate of the 2016 election cycle. Climate change was among the issues mentioned, though it was not prompted by a question from the moderator Lester Holt. (Photo: Gage Skidmore, Wikimedia Commons CC-BY-SA-3.0).

In this week’s trip Beyond the Headlines, Peter Dykstra recaps portions of the September 26, 2016 presidential debate and climate change attitudes with host Steve Curwood and also discusses developments in energy politics. And in environmental history, he notes the legacy of the Society of Environmental Journalists in American news coverage.

CURWOOD: Off to Conyers, Georgia now, to dig beyond the headlines with Peter Dykstra. He's with DailyClimate.org and Environmental Health News, that’s EHN.org and he's on the line now. Hi there, Peter.

DYKSTRA: Hi, Steve. Hey, how ’bout that debate a few days ago?

DYKSTRA: Nope, not a single question in any of the Presidential debates four years ago, and none this time from moderator Lester Holt, but without prompting from the moderator, both Donald Trump and Hillary Clinton made mention of it. Late in the proceedings, Mr. Trump ridiculed the position held by his opponent, and by President Obama, that climate change is a major threat to global security.

CURWOOD: Oh you know another place where that’s accepted as fact is the Pentagon. Hey, remind us what Hillary Clinton said.

DYKSTRA: Well, she gave a plug for clean energy and pointed out that Donald Trump has repeatedly called climate change a hoax. Trump denied ever having said that, as if the multiple times he has said exactly that on Twitter and in interviews aren’t available for the world to see.

CURWOOD: So let’s see -- he denies his own denial?

DYKSTRA: Precisely. And the day after the debate, his campaign manager, Kellyanne Conway, said he does believe in climate change, but that it has nothing to do with human activity. But his running mate Mike Pence said this week that climate change is real and human-caused.

CURWOOD: OK. Well, there are supposed to be two more presidential debates in October -- let’s see if there’s a climate question then.

DYKSTRA: Yeah let’s see. But here’s a couple more election-related notes: Donald Trump chose the leader of his transition team for the Environmental Protection Agency last week, and it’s Myron Ebell, a Washington lobbyist who’s pretty much made a career out of trying to destroy the EPA.

Donald Trump announced that, if he is elected president, Myron Ebell will lead the Environmental Protection Agency. Ebell is the director of the Center for Energy and Environment at the Competitive Enterprise Institute, an organization which works to question many of the regulatory policies of the EPA. (Photo: U.S. government work, Wikimedia Commons public domain)

CURWOOD: Have the fox guard the henhouse?

DYKSTRA: And Steve, I wanted to mention one poll -- well, it’s sort of a poll, where Trump holds a better than three-to-one advantage over Hillary Clinton.

DYKSTRA: The makers of the Chia Pet say sales of the Donald Trump Chia Pet is winning in a landslide -- 78 percent to 22 percent for the Hillary Clinton Chia Pet.

CURWOOD: Oh thanks for that seedy bit of election intelligence. What’s next?

DYKSTRA: People tend to throw around the term “game changer” pretty casually, but here’s a number that may well be a true game changer for the energy industry. The International Energy Agency says that investment in new oil and gas production took a dramatic drop of about 25 percent in 2015.

CURWOOD: We’re talking about huge here, and maybe that’s an omen for where we’re headed. Did they give reasons for the drop?

DYKSTRA: Well, there’s no single reason for it, but as wind and solar power becomes cheaper and more competitive, they’re leaving their mark. And so are the potential demands of the Paris Climate Accord. The biggest single reason comes from the oil and gas industry itself: prices have dropped so much that they’re not as attractive an investment. IEA also says it expects investments in oil and gas to continue to decline in future years, but maybe not by 25 percent a year.

CURWOOD: Still, that could really be a big game-changer. Well Peter now it’s time for our weekly environmental history lesson. What have you got?

DYKSTRA: Last week I attended the annual conference of a group we both belong to and both admire, the Society of Environmental Journalists. We heard from speakers like California Governor Jerry Brown and had several days’ worth of deep discussion on the science, and politics, and economics of all the issues we cover here and others cover in news outlets all over the world. 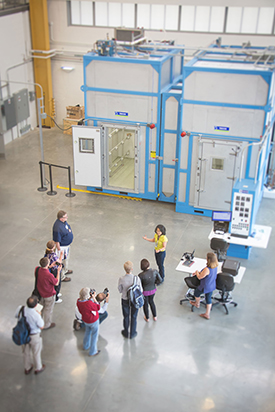 CURWOOD: Yeah, and SEJ has been around just about as long as Living On Earth has been on the air.

DYKSTRA: Right, in fact the first SEJ conference was 25 years ago this week in Boulder, Colorado. A lot has changed since then, but a lot hasn’t. Despite at least twelve Pulitzer Prizes won by environmental writers and reporters, in some places we’re still regarded as the gum on the bottom of journalism’s shoe. Which brings us to an epic tale that helped inspire the founding of the organization.

CURWOOD: This wouldn’t be the story about a famous TV reporter would it?

DYKSTRA: It would indeed. Back in 1989, Sam Donaldson of ABC News -- folks might remember him as the alpha dog in the White House press corps, shouting questions at President Reagan in his deep baritone voice. Well, he was interviewed as he left the White House beat to host a weekly show and the reporter asked him if this was a demotion. Sam explained what a true demotion and shaming would be for a star reporter and he said, “It’s not like I’m being shifted to the ecology beat.”

CURWOOD: Thanks a lot, Sam. And there are big changes afoot at Society for Environmental Journalists, right?

DYKSTRA: There are. Beth Parke signed on as SEJ’s Executive Director shortly after its founding, and she’s moving on after a quarter-century of great leadership. It’s been a tough week for me, Steve. Not only did Vin Scully and David Ortiz retire from baseball, but Beth Parke is walking away. They’re all leaving great legacies behind.

CURWOOD: She is in their league.

Kellyanne Conway on Trump and the climate