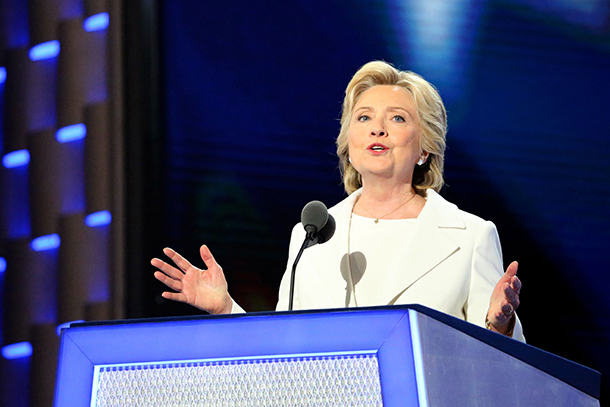 In the second 2016 Presidential debate and at a rally in Florida, Democratic presidential candidate Hillary Clinton laid out her vision for an economy built on clean energy and a country resilient in the face of climate threats. Citing natural gas as a bridge fuel, she offered a plan to help communities transition away from coal. Clinton also reminded voters that Republican candidate Donald Trump once said climate change is “a hoax created by the Chinese” and she warned of the dangers of electing climate deniers to the White House and Congress.

CURWOOD: From the Jennifer and Ted Stanley Studios at the University of Massachusetts Boston and PRI, this is Living on Earth. I’m Steve Curwood. As the U.S. national elections draw near, we are taking a look at the environmental records and plans of the presidential candidates. We have already spoken with Green Party candidate Dr. Jill Stein, and reported where the Republican ticket led by Donald Trump stands. Today, we turn to the democrat, Hillary Clinton. We begin with energy, with comments she made at the second Presidential debate on October 9, when moderators Martha Raddatz and Anderson Cooper called on coal industry worker Ken Bone to pose a question.

BONE: What steps will your energy policy take to meet our energy needs, while at the same time remaining environmentally friendly and minimizing job loss for fossil power plant workers?

CLINTON: You know, because it sounds like you’re in the business or you’re aware of people in the business, you know that we are now -- for the first time ever -- energy independent. We are not dependent upon the Middle East, but the Middle East still controls a lot of the prices, so the price of oil has been way down. And that has had a damaging effect on a lot of the oil companies, right? We are, however, producing a lot of natural gas, which serves as a bridge to more renewable fuels, and I think that’s an important transition. So I have a comprehensive energy policy, but it really does include fighting climate change, because I think that is a serious problem. And I support moving toward more clean, renewable energy as quickly as we can, because I think we can be the 21st century clean energy superpower and create millions of new jobs and businesses.

CURWOOD: Secretary Clinton noted that the coal industry is already in trouble so she plans to help revitalize coal mining communities.

CLINTON: Because those coal miners, and their fathers and their grandfathers, they dug that coal out, a lot of them lost their lives, they were injured; but they turned the lights on and they powered our factories. I don’t want to walk away from them. So we’ve got to do something for them. 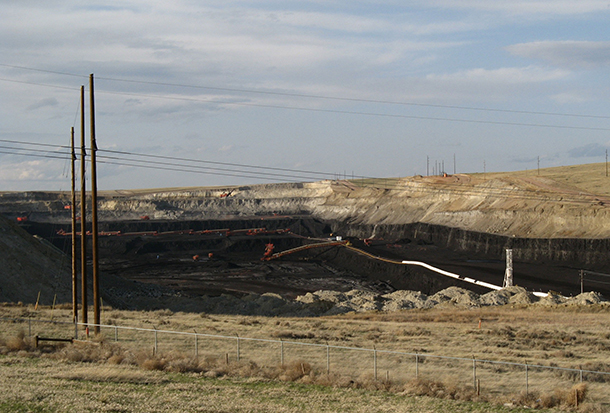 In her answer to citizen Ken Bone’s question about energy and jobs at the second 2016 presidential debate, Clinton pointed to her plan to revitalize communities that transition away from coal. (Photo: Greg Goebel, Flickr CC BY-SA 2.0)

CURWOOD: Just two days after the debate, Secretary Clinton traveled to Florida in the immediate aftermath of Hurricane Matthew. With former Vice President Al Gore in tow, she reminded voters that every vote counts: Mr. Gore lost Florida by just a few hundred votes in 2000. And she also linked the hurricane to the risks of climate change.

CLINTON: It is one of the most important issues at stake in this election. [AUDIENCE CHEERS] Look at it this way -- our next president will either step up our efforts to address climate change, to protect our planet, to protect our health, and to create good jobs that cannot be outsourced, by growing our clean energy economy. Or, in the alternative -- we will be dragged backwards and our whole future will be put at risk. So we’ve really got to get this right. And if you need additional convincing, just remember what happened this week. Hurricane Matthew killed at least 26 people in our country, more than 1,000 as far as we know right now in Haiti. North Carolina is still dealing with serious flooding. Now some will say, ‘we’ve always had hurricanes. They’ve always been destructive.’ And that’s true. But Hurricane Matthew was likely more destructive because of climate change.

Right now, the ocean is at or near record high temperatures, and that contributed to the torrential rainfall and the flash flooding that we saw in the Carolinas. Sea levels have already risen about a foot – one foot – in much of the Southeast, which means that Matthew’s storm surge was higher, and the flooding was more severe. Plus, as you know, the impact of climate change goes beyond extreme events like hurricanes. It’s become a daily reality here in Miami. You have streets in Miami Beach and in Shorecrest that are flooding at high tide. The ocean is bubbling up through the sewer system. Sometimes people call 311 because the assume a water main must have broken, when actually it is the sea rising around them. 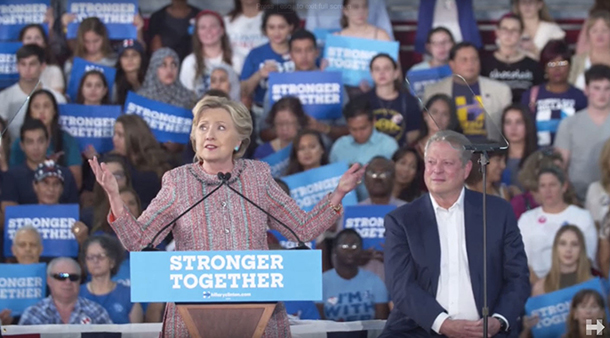 Former Vice President Al Gore hit the trail with Secretary Clinton in the swing state of Florida, warning of the disastrous climate consequences of a Donald Trump presidency. (Photo: YouTube)

CURWOOD: Secretary Clinton also warned those at her Miami rally of the health risks that we all face with climate change as well.

CLINTON: Mosquitoes that carry diseases like the Zika virus, and ticks that carry Lyme disease are expanding their ranges. And hotter summers and longer pollen seasons are making allergies and asthma worse, which is especially bad for our children. And look at what’s happened in California, a brutal five year drought. Wildfires that burned more than nine million acres in our country last year. And it’s also about our national security. The Pentagon has identified climate change as a threat to our national security. The U.S. Atlantic fleet is based in Norfolk, Virginia. It’s the largest naval installation in the world. And because of rising sea levels, the base is frequently flooded, even when it’s sunny. So you would think, if you look at the facts, if you listen to the science, that even the most committed climate skeptic would say, “okay, I agree, something’s happening here, we need to take it seriously.” But unfortunately there are still too many people - in Washington, on the campaign trail - who won’t face what’s happening right in front of us. Donald Trump is, quote, “not a big believer in climate change.” [AUDIENCE BOOS]

And you know as I said, he says it’s a hoax created by the Chinese. We cannot risk putting a climate denier in the White House, at all - that is absolutely unacceptable. We need a president who believes in science and who has a plan to lead America in facing this threat and creating good jobs - and yes, saving our planet. So here’s what I want to do. First, we need to do a lot more on clean energy. The clean energy superpower of the twenty-first century is probably going to be either Germany, China, or us, and I want it to be us. Renewable energy is already the fastest growing source of new jobs in America! [AUDIENCE CHEERS] As president I want us to have 500 million more solar panels installed across America by the end of my first term, and let’s generate enough renewable energy to power every home in America within the decade. Let’s make our buildings and factories more energy efficient and cut our oil consumption by a third. And we can get there by investing and supporting in cutting-edge research, to keep developing cheaper and better clean energy technologies, investing in clean energy infrastructure and advanced manufacturing, putting big partnerships together between states, cities, and rural communities.

CURWOOD: Hillary Clinton also spoke of the need to prepare for the effects of climate disruption.


Clinton drew a link between Hurricane Matthew and climate change in her speech in Florida on October 11th, just days after the storm pummeled the Southeast with rain. Above, National Guardsmen help residents escape the floods in Fayetteville, North Carolina. (Photo: Staff Sgt. Jonathan Shaw, CC BY 2.0)

CLINTON: We need to invest in resilient infrastructure. Now sometimes that might mean building a seawall. Other times let’s be more creative. Like in New York harbor, where we’re replanting oyster beds to form natural barriers to storm surge. [AUDIENCE CHEERS] Sometimes we’ll overhaul an outdated sewer system to deal with flooding from heavy downpours. In Philadelphia they’re trying something else: green roofs, porous pavements, curbside gardens to help absorb storm water. [CHEERS] And then finally, we’ve got to lead the world to confront the climate challenge. If we don’t do it, no one will do it! Let’s move on with the kind of leadership that the world as well as our country deserves.

You know, when I was Secretary of State, I worked with President Obama to make climate change a top diplomatic priority. We fought to get China and India and other major polluters to agree for the first time in history to be part of the solution. In fact, we had to crash a secret meeting in Copenhagen, Denmark – slipped past the guards, it was all very cloak-and-dagger, but for a really important purpose. And because of that breakthrough and a lot of patient, persistent work, and because of American leadership, 195 nations signed onto a global agreement last December. It’s called the Paris Agreement, and [AUDIENCE CHEERS] I am not exaggerating when I say, it is our last best chance to solve the global climate crisis. And what does Donald Trump want to do? He wants to cancel the Paris Agreement. [AUDIENCE BOOING] Climate change needs to be a voting issue! This election matters more than any has in a really long time. And just look if you will, look at the difference between your state, the “Sunshine state”, which has less solar energy than New Jersey has right now. And do you know why? Because you have a governor who ordered your state government never to use the words climate change! [AUDIENCE BOOING] So my friends, this is a big deal in our election and it’s going to be a big deal for our country and our world. 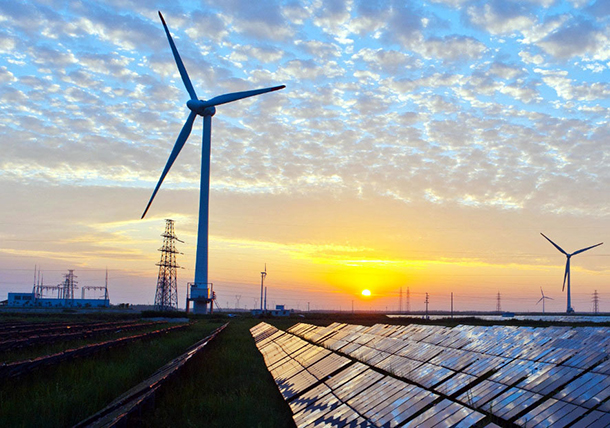 Watch the second presidential debate of the 2016 general election