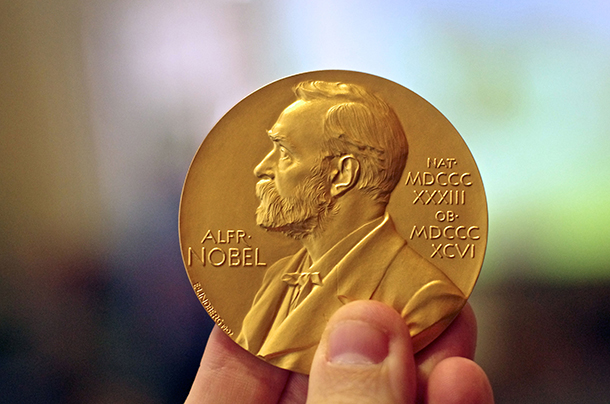 Beyond the Headlines this week, host Steve Curwood and Peter Dykstra note that contrary to dire predictions of the future as coal use was reduced, electricity prices have gone down. Also, sales of plug-in electric vehicles have climbed recently and they comment that all this year’s American scientists who won Nobel prizes are immigrants. Then they look back on the 1973 Arab oil embargo that brought soaring gas prices, the 55 mph speed limit, and actually saved lives.

CURWOOD: It’s Living on Earth, I’m Steve Curwood. Time now to see what’s happening in the world beyond the headlines with our guide, Peter Dykstra. He’s with DailyClimate.org and Environmental Health News, that’s EHN.org and is on line now from Conyers, Georgia. Hi there, Peter.

DYKSTRA: Hi, Steve. You know, one of the recurring themes from supporters of big coal is that they provide cheap energy, and if coal-burning power plants go away and regulators crack down on fossil fuels, your electric bill is going to go through the roof. Well, pending litigation and the ruling of the DC court of appeals, the Clean Power Plan is reality and coal plants have been dropping like enormous, soot-covered flies -- but guess what?

CURWOOD: I’m listening Peter. I seem to remember even President Obama said prices would skyrocket back in 2008.

DYKSTRA: Right – but the U.S. Energy Information Administration says that for the first time in fourteen years, residential electricity prices went down in the first six months of this year.

CURWOOD: Hmmm, so what caused the drop, do you think?

DYKSTRA: Well natural gas is setting the market right now, and it’s setting it cheaply. Wind and solar are growing in capacity and shrinking in cost, but not enough to impact the nationwide market just yet. EIA warns that the drop, while it’s unusual, is not necessarily a permanent trend.

CURWOOD: Yeah, but those predictions that we’d be either paying through the nose or shivering in the dark aren’t happening. Hey what do you have for us next?

DYKSTRA: Something on a related note that might really be a trend. The Union of Concerned Scientists says Americans bought a record 45,000 plug-in electric vehicles in the third quarter of 2016. That’s a record, and it’s happening despite comparatively low gasoline prices. Another source, an industry website called Autoblog, puts the numbers a little lower, at 36,000, but that’s still a 38 percent increase over the previous year. 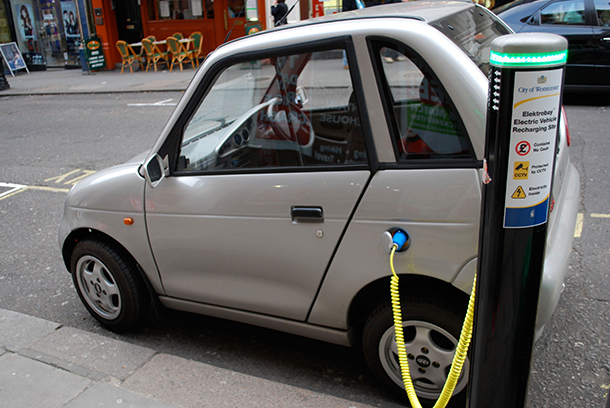 Americans bought more electric vehicles in the third quarter of the 2016 fiscal year than any other year. (Photo: Alan Trotter, Flickr CC BY 2.0)

CURWOOD: Sounds like the fact that sales are going up while gasoline stays fairly cheap is the surprising news here. What’s going on?

DYKSTRA: Well it might be a combination of lowering cost of the EVs, extending range of the EVs, and just deeper concern abut climate change. As EV prices come down and plugin stations become easier to find, the trend is likely going to continue. But I want to sneak in another observation on an unrelated topic.

DYKSTRA: That’s right and they’re taking away our Nobel Prizes!

CURWOOD: [LAUGHS] Okay and finally, our weekly dip into the trough of history. What’s new, or maybe I should ask what’s old?

DYKSTRA: Well 43 years ago, October 1973, Israel squared off in a brief war against Egypt and Syria. In response to U.S. support for Israel, Saudi Arabia and other Arab oil states banned oil shipments to the U.S., causing long lines at gas stations and prompting the price of oil to quadruple from three dollars a barrel to $12 a barrel. 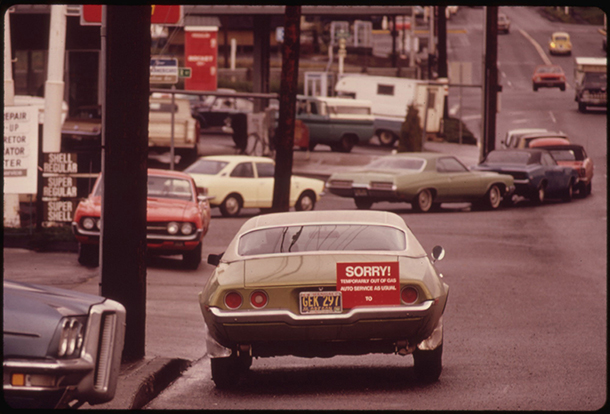 CURWOOD: And to think that today we call fifty bucks a barrel a bargain!

DYKSTRA: Right, and this set off a chain of events in the US like the national 55 mile an hour speed limit, the creation of the Department of Energy, and the first serious talk about alternative energy, conservation and reducing oil imports.

CURWOOD: And just how much of that serious talk resulted in serious action back then?

DYKSTRA: Not much at all, and not much for a long time. The 55 mile an hour speed limit saved not just gasoline, but it also saved lives. But eventually America declared that it couldn’t drive 55, and the 55 mile an hour speed limit went away. Both oil consumption and car miles driven increased for decades to come; oil imports waned only recently, bigger, less efficient vehicles like pickups and SUVs and minivans became all the rage and clean energy is just now beginning to fulfill years and years of predictions.

CURWOOD: But fuel efficiency is much better and you know, maybe we’re finally turning that corner. Thanks for this optimistic take on the world beyond the headlines today Peter.

DYKSTRA: Any time, Steve. Talk to you soon.

CURWOOD: Peter Dykstra’s with Environmental Health News, that’s EHN.org and the DailyClimate.org. And there’s more on these stories at our website – LOE.org.