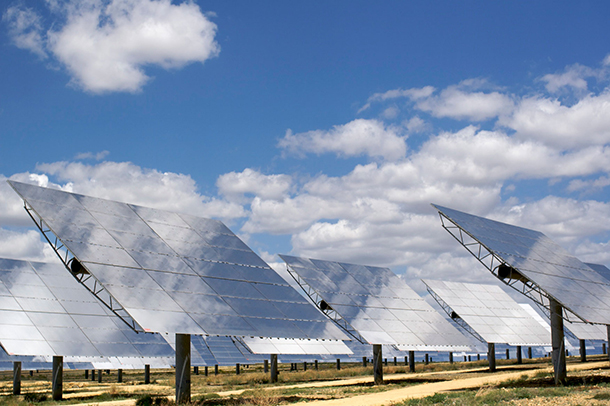 Peter Dykstra finds a ballot initiative in Florida that affirms homeowners’ right to solar power is actually designed to discourage rooftop panels. He also discusses with host Steve Curwood fake twitter accounts that enthusiastically support the Dakota Access Pipeline, the focus of bitter protests. And in this week’s trip into history, the two mark the anniversary of a major flood in Florence that destroyed some iconic pieces of Renaissance art.

CURWOOD: Well, while he’s been digging beyond the headlines, Peter Dykstra of DailyClimate.org and Environmental Health News, EHN.org, has found that Initiative 732 isn’t the only curious ballot measure out there. Peter’s on the line now Conyers, Georgia. Hi there, Peter, what have you found?

DYKSTRA: Hi, Steve, you know there’s an unusual political effort that’s made some waves here in the southeast U.S. They call themselves the Green Tea Party, and it’s just what it sounds like, green groups playing nice with some in the Tea Party, uniting on clean energy even if they may not agree on things like who the next President should be.

CURWOOD: Political cooperation. What a concept!

DYKSTRA: Yeah and the two sides have united in opposing a Florida ballot measure that would enshrine the right to go solar in the Florida constitution.

CURWOOD: Wait, they’re united against the right to go solar?

DYKSTRA: No, they’re fine with that, but the language of Amendment One on the Florida ballot would also make it pretty much impossible for homeowners to afford the rooftop solar they’ve won the rights to.

DYKSTRA: Well, beyond the high-and-mighty language about Solar Rights, Amendment One would also give electric utilities the right to refuse to buy back solar power generated from individual homeowner’s solar panels, and that could be enough to chase the blossoming rooftop solar industry straight out of the state. Which may be why the $21 million that’s come in to finance Amendment One, much of it from four Florida electric utilities – is ten times what opponents have spent. And a leaked audio recording from Amendment One supporters seems to suggest that the ballot question and constitutional amendment are intentionally misleading.

CURWOOD: Hmm, sounds like the moral of this story is that, whatever the issue, read the fine print.

DYKSTRA: More possible deception, not on the ballot but on Twitter, where at least character assassination is limited to 140 characters. For the second time in a month, a fossil fuel promotion group has been caught apparently creating fake Twitter accounts to make it appear they have broad public support.

DYKSTRA: Well, not really, I’m saying that everything people say on Twitter doesn’t necessarily come from actual people. The clash between coal mining and renewable energy is a huge issue in Australia, and when the lights went out due to a storm in the state of South Australia recently, a Twitterstorm raged, blaming renewable energy for being unable to stop the blackout. A sleuth for Buzzfeed’s Australia news site tracked down the Tweeters, and virtually all of them were Twitter accounts less than 24 hours old, using profile photos taken from stock image files.

CURWOOD: Aha, so those Twitter attacks came from people who were literally born yesterday.

DYKSTRA: Right, and this closely echoes what seems to have happened last month in North Dakota. The news site DeSmogBlog tracked down 16 newly-established Twitter accounts that were very, very enthusiastic about the controversial Dakota Access Pipeline, how safe it would be, and how many jobs it would create, and these Tweets were critical of the anti-pipeline protesters that made headlines last month and you reported on recently. When DeSmog and others started asking questions online, those Twitter accounts vanished.

CURWOOD: Hard to believe anything’s real these days. Let’s turn to the history file where something actually happened at least, what do you have for us this week?

DYKSTRA: The fiftieth anniversary this coming week for disaster in one of Europe’s iconic Renaissance cities. After a week of steady rain, Italy’s Arno River overtopped its banks and levees and water poured through the streets of Florence. Seventeen people died, and the water and mud rolled through centuries old homes, churches and museums, damaging or destroying religious icons, sculptures and Renaissance artwork.

CURWOOD: Yeah, it was a disaster that touched lives and property, but also culture and history.

DYKSTRA: And a major disaster like that is something that Florence endures about once a century, with a lot of little floods in between. On the same calendar day in the year 1333, another huge flood killed an estimated 3,000 in the city and destroyed a landmark bridge, the Ponte Vecchio. Emergency planners say Florence is better prepared than ever for the next flood, but they also worry that the loss of upstream farmland to development may make the next flood worse.

CURWOOD: And that’s a common problem in a lot of places. Peter Dykstra is with Environmental Health News, that’s EHN.org and DailyClimate.org. Thanks, Peter. We’ll talk to you again real soon. 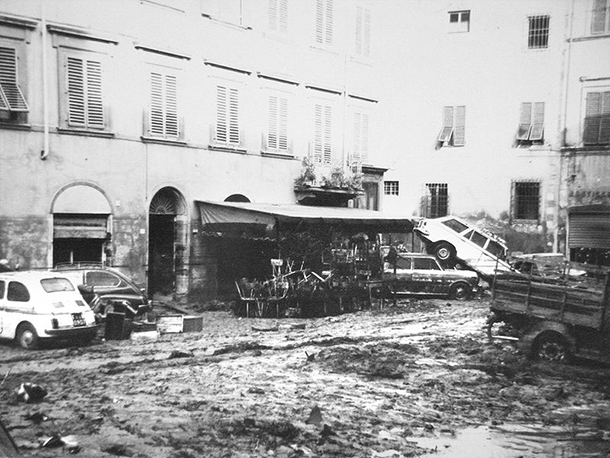 The flood of the river Arno in Florence on November 4, 1966 destroyed a number of art pieces and killed at least 17 people. (Photo: Ricce, Wikimedia Commons, public domain)

DYKSTRA: OK, Steve thanks, talk to you soon.

The Independent: The 1966 flood in Florence, Italy

See pictures of the Florence flood