Norway’s Svalbard Archipelago is home to the northernmost coalmines on earth that have powered the tiny community and earned export cash for a century. Resident Explorer Mark Seth Lender visited Svalbard, and was struck by its many contrasts.

CURWOOD: Off to the top of the world now, to a small group of islands halfway between Norway and the North Pole. The Svalbard Archipelago is home to the Global Seed Vault, twice as many polar bears as people, and the northernmost coal mines on earth. Resident Explorer Mark Seth Lender paid a visit, and was struck by its many contrasts.

LENDER: Above the Arctic Circle lies a valley that a glacier made. There, a river fed by the fast-melting ice rushes toward the dark fjord and into the Greenland Sea. Straddling the river is the company town of Longyearbyen. Svalbard Kirke with its unadorned Lutheran lines on the one bank; the working folk of the town and their dwellings and small commerce on the other.

High, on both sides, scarring the cliffs, are the remnant of the mines.

Fire has stained the mouth of every pit, the stones rust-colored from the flames; No one alive remembers the burning. Gone the men who dug the coal, who heard the wires sing as the coal cars rolled in the cableway down to the docks, who were there -- for the cave-ins, and the gas, and the orange roar of the flames. Who remember the long work lying on their sides in a three-foot seam, the rockdrill clamoring…

All is silence now, except for the endless ringing in the ears. 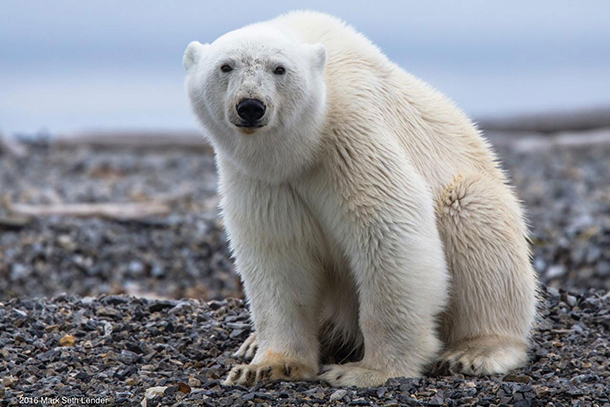 Two million tons of coal! Under the sun when it never sets and in the long months when the sky is dark as the anthracite wrenched from frozen ground. Year in. Year out. And in the aftermath, every glacier in retreat. From here until the land ends at 81 North Latitude the ice is scored with dark lines (the tally-marks of profit and of enterprise).

Just up the hill from the giant loading crane the Seed Vault tunnels through the permafrost and into the ancient granite shield. Just down the road the funnel of the power plant pours out black smoke across the hard-packed snow. And at the docks, where the cableway comes to an end, a Russian ship is taking on the last of the mounded coal. Pure white upon her sky-blue stacks the painted image of a polar bear.

CURWOOD: For some of Mark’s photos of the mines and cable cars and polar bears head on over to our website, LOE.org.


The archaeological history of Svalbard

The Barent Observer: Article on the future of a coal-free Svalbard

Additional glimpses of the abandoned mine community in Svalbard