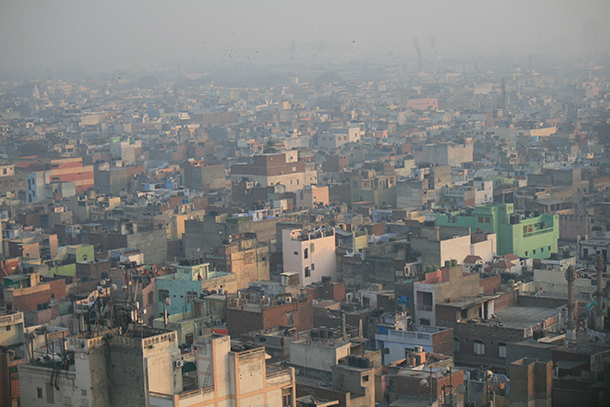 In this week’s trip beyond the headlines, Peter Dykstra tells host Steve Curwood how dirty air is jeopardizing health in Southeast Asia, and discusses the climate implications if OPEC tightens oil supplies to prop up prices. Then they look back to the world’s worst intentional environmental disaster – the Kuwaiti oil wells set ablaze by the Iraqi army were capped twenty-five years ago.

CURWOOD: Time now to check in Peter Dykstra of DailyClimate.org. and Environmental Health News, that’s EHN.org for what’s going on beyond the headlines. He’s on the line from Conyers, Georgia.

DYKSTRA: Hi Steve. There were two new studies released this past week on the extent of air pollution problems. A study done by physicians in India says that strokes are rising sharply there, projecting that one in six Indians will have a stroke in their lifetimes, and one-third of those stroke victims can blame air pollution.

CURWOOD: Wow. Hey, let’s do some quick math here – so you’re talking about one-third of one-sixth of a nation of a billion people or more – we’re talking, what, tens of millions of potential stroke victims? What’s in the other new study?

DYKSTRA: The other study also focuses on air pollution in the same part of the world: UNICEF, the United Nations Children’s Fund, says that about 300 million children breathe what is considered to be “highly toxic air.” Nearly three-quarters of those kids live in South Asia, where vehicle pollution, factories, naturally-occurring dust, and slash-and-burn agriculture are the leading culprits.

CURWOOD: You know, given everything we hear about China’s pollution, I would have thought it would be at the top of this list.

DYKSTRA: China’s certainly got its problems, but another U.N. agency, the World Health Organization, says kids in South Asian nations including India, Pakistan and Bangladesh, are exposed to air that’s at least six times dirtier than what’s considered safe. They can inherit a lifetime of consequences, ranging from asthma and pneumonia to heart failure, and, as the other study pointed out, strokes.

CURWOOD: And as standards of living rise in these countries, they could either choose to deal with the problem, or make it worse with more and more cars and more dirty energy. What’s next?

DYKSTRA: Let’s talk about oil, and specifically OPEC, the Organization of the Petroleum Exporting Countries, fourteen nations that control close to half the world’s oil supply. Some OPEC nations, particularly Venezuela, are suffering due to two years of low oil prices, and members of the cartel have been talking with non-OPEC oil producers like Russia about tightening oil supplies in order to prop up oil prices.

CURWOOD: Which, of course, is not exactly in the spirit of the free market, is it?

DYKSTRA: Bingo. And even if OPEC’s 43-percent share of the world’s oil isn’t quite what it used to be, they still have enormous power to mess with the world’s economy, not to mention its climate. When the OPEC members meet in Vienna at the end of this month, if they’re able to strike a deal to tighten supply, and if they get help from non-OPEC producers, the impacts, good and bad, could be felt everywhere from the gas pump to factories, from trains to trucks to ships. Car buyers might look at more EV’s or hybrids and fewer SUV’s and pickups. The smoky skies of India might be slightly more breathable, and rival forms of energy from coal to solar may see their markets open up a bit.

CURWOOD: Okay, time now for us to turn to the history file, what do you have for us this week?

DYKSTRA: Well, sticking with smoke and oil, twenty-five years ago this week, the world’s worst intentional environmental disaster came to a close as the last of about 700 oil wells set ablaze in Kuwait by the retreating Iraqi army was capped. They had burned for ten months.

CURWOOD: And didn’t Iraq also spill a lot of oil into the Persian Gulf itself?

DYKSTRA: Yes, roughly five to ten million barrels from offshore wells and platforms into the Persian Gulf. The high-end estimates for the Deepwater Horizon spill six years ago are about five million barrels. The land-based oil fires were believed to be an effort by Saddam Hussein’s armies to try and slow or stop forces from the US and its coalition partners from advancing north into Baghdad. Estimates for the land-based oil spill range up to a billion – that’s a billion with a “B” -- barrels burned along with untold volumes of natural gas. And there’s one more, smoky, oily thing about this in a massive act of environmental warfare.

DYKSTRA: Disputes with Kuwait over oil were some of the main reasons Saddam Hussein said he’d launched the invasion of Kuwait. He had charged the Kuwaitis with producing more oil than OPEC had authorized.

CURWOOD: Ah, so we have come full circle, and the whole region still suffers, Peter. There are reports that ISIS is now burning oil in trenches in an attempt to hold on to the Iraqi city of Mosul. 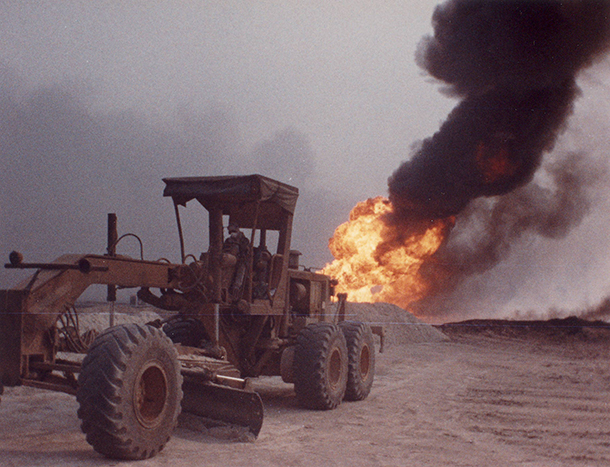 Twenty-five years ago this week, the last of the 700 Kuwait oil wells that had been set ablaze by the retreating Iraqi army was capped. (Photo: Bryan Dorrough, CC BY 2.0)

CURWOOD: And you can find more information on these stories at our website, LOE dot org.