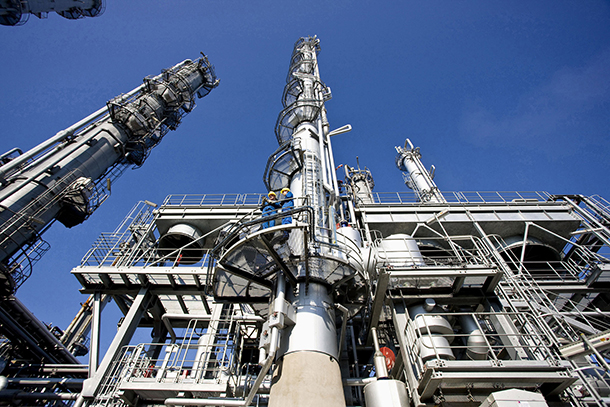 Ethane is one of the most useful gases to the petrochemicals industry. But it needs some extra processing before it can become the ethylene used in plastics manufacturing, and Reid Frazier reports on how a new “ethane cracker” plant being built by Shell could bring more pollution to Pittsburgh region’s air.

CURWOOD: The Appalachian division of Shell Oil is building a $6 billion petrochemical complex 30 miles Northwest of Pittsburgh that will convert a byproduct of fracking into polyethylene, which is used to make everything from plastic bags to bottles to toys. This fracking byproduct is called ethane. And while this industrial facility is expected to create thousands of construction jobs and some 600 permanent ones, it is also forecast to increase air pollution in the region, thanks to what’s called an ethane cracker and the way its emissions are regulated. But first to explain the ethane cracker, here’s reporter Reid Frazier of the Allegheny Front.

FRAZIER: You might be wondering what is ethane, and what is an ethane cracker. To answer this question for myself, I paid a visit to this guy:

VESER: Hi, nice to meet you.

FRAZIER: Goetz Veser is a chemist at Pitt’s Swanson School of Engineering. He explained ethane is found with oil and natural gas underground. At normal temperatures and pressures. It’s a gas. And it comes from the same place that oil and natural gas do -- fossils.

VESER: Yeah I mean basically it's old organic mass. As we always joke, it's dinosaurs. It's plants --animals from – from geological times.

FRAZIER: There is a lot of ethane in the deep shale formations in Western Pennsylvania. It’s a simple chain of two carbon atoms surrounded by six hydrogen atoms.

VESER: And ethane itself is not a very useful chemical, which is why it's being sent to a so-called cracker. 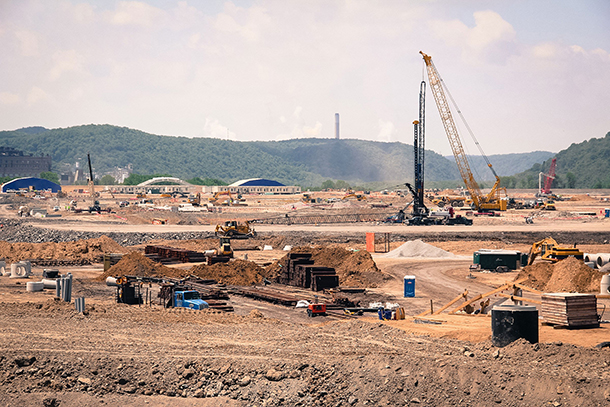 Construction is taking place on the site where Shell is building an ethane cracker plant near Pittsburgh, PA. (Photo: Reid Frazier)

FRAZIER: Before it even gets to the plant, the ethane gets separated from methane. That is the main component is natural gas, the stuff that heats your furnace and burns on your stovetop. At the cracker, the ethane gets put into tubes and heated up to around 1,500 degrees.

VESER: So as you heat it up, you basically make this molecule wiggle around more and more wildly.

FRAZIER: As the molecule wiggles more and more, the bonds holding its atoms together stretch and get weaker.

VESER: You can almost imagine it like when you have two kids that kind of hold arms and swing each other around. I mean f they get too crazy and too wild at some point they just can't hold onto each other and fly apart. Sort of the same thing in a molecule here.

FRAZIER: This is the cracking part of the cracker, when the molecular bonds fly apart, the atoms rearrange themselves into something new called ethylene. The two carbon atoms form a double bond with one another in this ethylene molecule and his double bond is the key to why ethylene is so valuable.

VESER: This double bond is very reactive, and that makes ethylene an extremely useful and very very widely-used chemical.

FRAZIER: Ethylene reacts very easily with other chemicals, so it can be strung together in these long chains.

VESER: You basically take many of these double-bonded molecules and you use the double bond to connect them together, like Lego pieces.

FRAZIER: And when you snap all these ethylenes together, you get polyethylene. This is the ubiquitous plastic found in everything from milk containers, medical devices to detergents -- you name it.

VESER: You find it in medical equipment, in hospitals, you find it in food packaging industry...I mean it’s really -- it's hard, it’s almost impossible to imagine modern life without ethylene derivatives.

FRAZIER: And Shell’s ethane cracker will be one place where all these facets of modern life start to form, from a gas found deep underground.

CURWOOD: That’s reporter Reid Frazier. So now that we understand how an ethane cracker makes feedstock for plastic products, let’s take a listen now to more of his reporting as he explains why there are concerns that this new petrochemical plant could degrade local air quality.

FRAZIER: Jim Fabisiak is an environmental health scientist at the University of Pittsburgh. From his desk overlooking the Monongahela River, Fabisiak pulls out a sheet of paper with a simple line graph on it.

FABISIAK: If I could show you at least, one piece of data...

FRAZIER: The graph shows the amount of industrial pollution in Beaver County for volatile organic compounds, or VOCs. These are a broad class of chemicals that help form ground level ozone, or smog.

FABISIAK: And there's a steady improvement. So from 1999 to current, there's been about a 50 percent reduction in in VOCs released by industry over time okay, a significant progress in air quality.

FRAZIER: But beginning in 2016, it starts going up, and up, until the year 2021. That’s when Shell’s ethane cracker is slated to come online in Beaver County.

FABISIAK: Adding the cracker to this point in time moving forward brings the levels of VOCs released in Beaver County by industrial sources to levels greater than what was seen in 1999.

FRAZIER: In fact, with a projected 500 plus tons emitted per year, the plant would be the largest source of VOC pollution in western Pennsylvania, per EPA records, and it would be the third largest in the state, behind an oil refinery in Philadelphia and a Styrofoam plant in Reading. The next largest nearby VOC polluter is the Clairton Coke Works, checking in at 336 tons a year. In addition to this, the plan is classified as a major source of hazardous air pollutants like benzene and formaldehyde, which can cause cancer and other serious health problems. Fabisiak says these emissions are a concern, in particular because Pittsburgh’s air already fails to meet federal standards for several pollutants including ozone. But Shell and state officials say the cracker isn’t a threat to public health. Mark Gorog is head of the air quality program for the Pittsburgh regional office of the state department of environmental protection. He says since the Pittsburgh metro area doesn’t meet federal air standards, Shell is installing modern pollution controls and a leak detection system in the plant itself. 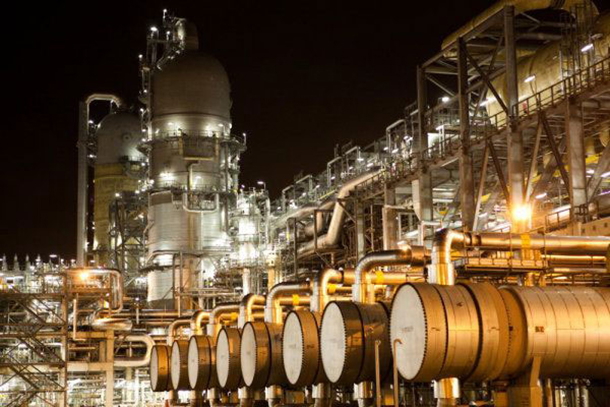 GOROG: So the technology they install has to meet latest and greatest, basically.

FRAZIER: In addition, the company had to show the DEP that its plant wouldn’t make the air unhealthy in surrounding areas.

GOROG: You know basically, they, you know, they modelled to show they will not cause or contribute to an exceedance of national ambient air quality standards and they did a risk estimate for air toxics which showed there was not going to be an undue risk to the public.

FRAZIER: On top of these measures, the company will buy more than 1,000 tons of pollution offsets to make up for the pollution offsets that will make up for emissions come from its smokestacks, storage tanks, and flares. These offsets are called Emissions Reductions Credits, or ERCs. They work kind of like a cap-and-trade system. The theory is that Shell will have to pay another company to clean up emissions at another facility, by buying credits from a plant that is either closing or installing pollution controls. But under state law, Shell is allowed to buy credits from plants that are already closed. Fabisiak says this means pollution that’s been gone from the region will be coming back in the form of emissions from the cracker plant.

FABISIAK: I don't see that as improving the air quality to any great extent. It's like three steps forward 2.99 steps back.

FRAZIER: For instance, the company is buying 70 tons of credits from FirstEnergy, for two coal-fired power plant units it closed in Armstrong County in 2012. It’s also buying 100 tons of credits from FirstEnergy’s closed Mitchell Power plant in Washington County, which ceased operations in 2013. Fabisiak says the best way for the system to work is if Shell would buy credits for future cuts to pollution for say, a company investing in pollution reductions at a power plant.

FABISIAK: If everyone's still staying in the area and operating, over time that results in slow decreases in the amounts of emissions over time.

FRAZIER: The DEP, which approved Shell’s plan, doesn’t see a problem with how the pollution credit system is working. By state law, plants that close have 10 years to sell their emissions credits. Gorog says new plants have to buy about 15 percent more credits than they will actually emit. So if Shell wants to emit 100 tons of pollution, it will have to buy credits for 115 tons. This means that gradually, emissions will go down, Gorog says.

GOROG: There's a certain pool of pollutants for the area, and gradually, over time, it shrinks over time, you know, what the design does is shrink the pool of emissions to bring the area into attainment.

FRAZIER: This won’t happen overnight. The DEP’s plans call for the region’s air to meet federal guidelines within five years. Krishnan Ramamurthy -- acting director of DEP’s bureau of air quality -- says there’s another aspect of the credit program. It incentivizes companies to clean up.

RAMAMURTHY: Because emissions reductions credits has a value, a cash value. So particularly it’s -- it's supply and demand.

FRAZIER: And if demand goes up for new plants to be built alongside the Shell plant, for instance, then the price of the credits will go up, too, and could encourage companies to close older, dirtier plants.

RAMAMURTHY: So they can really put additional controls to justify the control cost by selling some of the emissions reductions credits in the program.

FRAZIER: Shell, in an emailed statement, declined to say how much it spent on its emissions credits but emphasized the plant was built on the site of a zinc smelting plant, which had a heavy environmental impact of its own. Some of Shell’s credits, in fact, came from that plant, which closed in 2014. With or without Shell’s ethane cracker, DEP officials admit it won’t be easy for Pittsburgh to meet federal air standards in the near future. That’s because last year the EPA enacted stricter rules for ozone. I’m Reid Frazier.