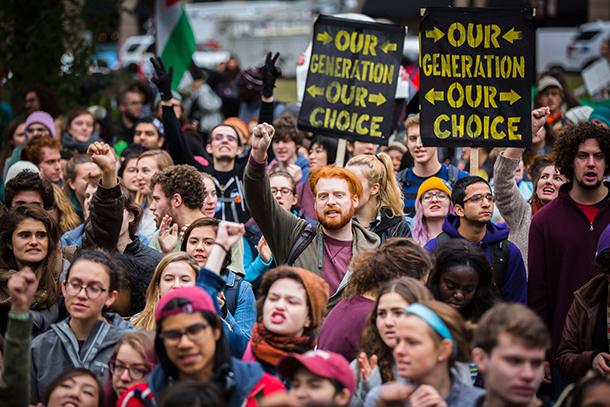 The fossil-free fight may be energized by youth, but Bonnie Frye Hemphill says there’s room for older generations in these movements as well. (Photo: John Silvercloud, Flickr CC BY-SA 2.0)

A new generation of nature writers is coming of age in America, and understanding how much of the pristine landscape their parents and grandparents enjoyed has gone. These new writers’ work is collected in the book Coming of Age at the End of Nature. Activist Bonnie Frye Hemphill reads and discusses part of her essay “Fossil Fuel Freedom Fighters”, and explains why, despite difficult odds, her generation is working towards a transition away from fossil fuels.

CURWOOD: More than a century ago the powerful nature writing of John Muir, Henry David Thoreau, and others inspired the protection of some of the most scenic treasures of the American landscape. But ever since Bill McKibben wrote “The End of Nature,” in 1989, there’s a new understanding that just about no part of the landscape is untouched or unaffected by modern humans. And much of the millennial generation has no direct experience of wild untamed nature. But a recent anthology of essays by millennials, called “Coming of Age at the End of Nature,” shows that they are engaging in new ways with our environment, and the forces affecting it. Today, we have another of these essays.

Everything and nothing about the planet has changed in my lifetime. I am 27. Everything because I have never known a time when our home didn't have a man-made fever and nothing because we've done so little to stop stoking it. "Global warming is all we've ever known," Ben Lowe, a founder of Young Evangelicals for Climate Action explained to the Wall Street Journal. This conundrum makes the McKibben's 1989 book, "The End of Nature" into Cassandra and a time capsule - prescient, ignored and almost buried. My grandmothers have told me stories of the World War II years, when Americans knew they had to work together and hard because justice was not a given.

My parent’s generation then fought for social and environmental action, but they thought they could fully succeed. Their sign said, "Save the Earth" because they thought they could. Like my grandmothers, we twenty-somethings don't assume climate justice will be done. We know that we must work for it, but unlike our parents, we who have come of age at the end of nature have grown past that naïveté about the planet's durability. We know that we cannot stop the climate from destabilizing.

My parents used to me to their friends by offering with pride that I wanted to save the world. My gut clenched every time because I'm not that dumb. I have no illusions that we will save the planet from the fossil fuel binge of recent centuries. The planet we have all known is over. We're now locked into the crazy weather that is on the news every night. But we can prevent collapse. We can protect our home enough to protect human lives and livelihoods that depend on it, and in seeking that salvation we might end up building something better than the status quo. After all, we're aiming for an economy powered by energy that doesn't blow up, innovations that require tons of new jobs, and a democracy disinfected from the desperate campaign donations of fossil fuel fat cats afraid of the future.

My generation is hopeful, practical, strategic and muscular, and not naïve. In fact, we are staking our very sense of self on it. We want history to write us as the ones who got to work. We are the fossil fuel freedom fighters and we’re on the move.

I was in Doha, Quatar, right around the time I was writing this essay. It was for the UN climate conference there. One of the most meaningful parts of that visit was checking out the convention center where different groups could do displays on what they're doing to solve climate change, and several of the world’s largest oil producers had literally acres wide displays that were bleachy and gleaming and pastel colored and utterly deserted. The whole thing was such a farce.

I kept coming back to a theme of honesty. Those who would deny climate change are desperate and delusional for building these massive displays on, you know, the climate action that BP is trying to take credit for. They're in denial. Anyone who’s got everything to lose should not be trusted, and so the sort of the derangement of climate denial comes off as so dishonest; whereas, by contrast, those of us were fighting climate change we’re honest with the fact, the brutal facts of chemistry and physics that are warming our home, but also honest with ourselves that we cannot solve problem anymore. 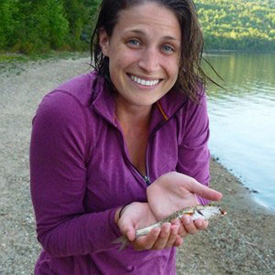 Bonnie Frye Hemphill is a solar designer and activist based in Seattle. Her essay “Fossil Fuel Freedom Fighters” is featured in the new collection Coming of Age at the End of Nature. (Photo: A&R Solar)

Today's pollution has locked us in for 100 years of warming. I can't save the world from climate change, but I can help take the edge off it. There's a very big difference between rising seas that come up a couple of feet or come up 10 feet. The difference is Bangladesh, the difference is Florida.

I've been working on this theme of freedom from fossil fuels for quite a while in my own mind. There's a common theme that those who would want to keep us on fossil fuels forever say, “Well, there's no other way. You drive a car so you must be disingenuous,” and I think that's answering the wrong question. I think the right question is not that I want to drive my car on gasoline. It's that I want to get from point A to point B. Offering freedom from fossil fuel only choices is what we're all about.

There is real anger here. I think there's some stages of grief going on. I'm certainly not angry at those of previous generations who are doing their part for climate action, I'm angry at those who would prevent us, me, from solving their problem.

CURWOOD: That’s writer Bonnie Frye Hemphill. Her essay is part of the collection, “Coming of Age at the End of Nature, A Generation Faces Living on a Changing Planet.”


Listen to the first essay in this series: “Urban Foraging at the End of Nature”

Listen to the second essay in this series: “High Tech Rain”

Read the book, “Coming of Age at the End of Nature”