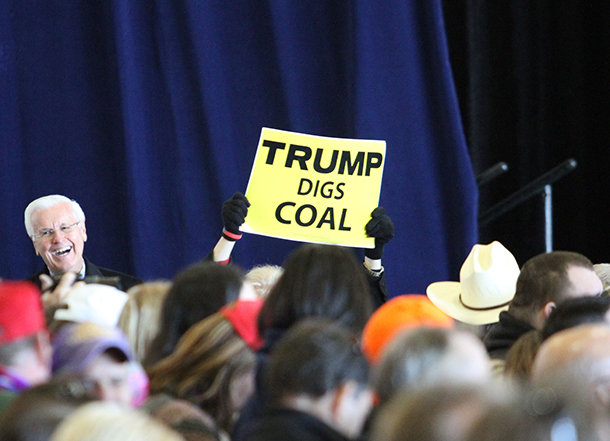 Coal miners made up a consistent interest group across the country at the President-elect’s rallies. (Photo: Tammy Anthony Baker, Wikimedia Commons CC BY 2.0)

CURWOOD: It’s Living on Earth, I’m Steve Curwood. One of the promises Donald Trump made on the campaign trail was to put the coal miners back to work and get the mines open. The message resonated in Pennsylvania’s coal country and helped win the region for the President-elect. Now folks are watching to see if he’ll keep his promise. As the Allegheny Front’s Reid Frazier reports, many of these voters don't expect miracles, but they do want Mr. Trump to put coal first.

FRAZIER: Stand outside a supermarket in Greene County in the southwestern corner of the state, and ask people what they want from the incoming president. You’ll hear this, a lot...

COURTWRIGHT: A lot of the coal miners are out of work, and their families are in need of work, as well as the construction aspect. I feel that there's a lot of people out there without jobs, and this time of the year they need jobs.

STROPE: And I just hope for better change within next four years for the coal miners.

KNIGHT: I would like to see more jobs, and less imports. I am definitely against imports.

FRAZIER: Dean Courtwright, Alissa Strope, and Kent Knight all want some version of the same thing - a return of industrial jobs like coal-mining to this part of the state. Greene County has lost a third of its jobs in coal mining, its largest industry, over the last four years. Donald Trump, who’s promised to slash environmental regulations on coal won the county by 40 points. So, now what? What do the voters who put Trump in the White House want?

In a word, jobs. It’s been over a year since the coal mine Dave Hathaway worked in closed. He spent most of 2016 sending out resumes, looking for work. The search gained urgency when his son Deacon was born in August.

HATHAWAY: I like it when he gets milk drunk. He just passes back out. Little coma.

FRAZIER: Hathaway’s union, the United Mineworkers of America, traditionally supports Democrats. But these last two election cycles, in 2012 and 2016, it hasn’t endorsed any presidential candidate. In November Hathaway gave Trump his vote.

HATHAWAY: I voted for Trump. I mean, a coal miner would be stupid not to.

FRAZIER: Hathaway just got hired at a nearby mine. He thinks the election of Donald Trump means he’ll have a better shot at keeping this job, even though he didn’t really like a lot of the things Trump had to say during the campaign.

HATHAWAY: He is a wacko. I mean he's never gonna stop bein' a wacko, you know what I mean? But I mean the things he did say, the good stuff, was good for the coal mining community. But we'll see what happens. 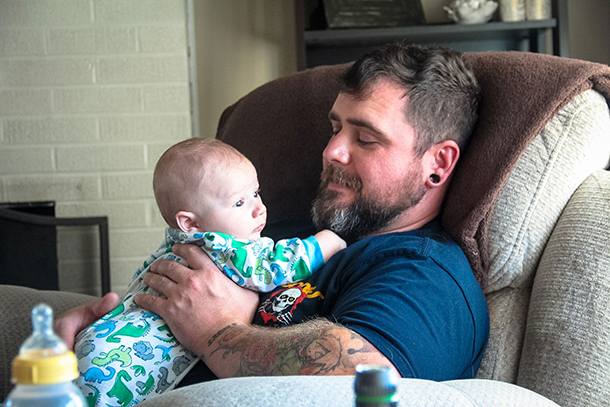 The coal mine that Dave Hathaway of Waynesburg, Pennsylvania worked at closed about a year ago. He voted for Donald Trump in the Presidential election. (Photo: Reid Frazier)

FRAZIER: Tom Crooks witnessed the decline in coal firsthand. He’s a vice president at RG Johnson, a construction firm that builds mine shafts.

CROOKS: Two years ago this week we had 145 employees, and right now we have 22.

FRAZIER: Crooks doesn’t use the phrase "war on coal", but he does think federal regulations mounted by Obama’s EPA have weighed down his industry, regulations like the Clean Power Plan, which curbs greenhouse gas emissions from coal fired power plants. Crooks wants fewer regulations,\ and more government research into making coal as clean as possible.

CROOKS: And really what's happened over last eight years is, the smart people stopped working on coal, in part because of the way the federal government and the state governments looked at us. We just want them to start looking to coal as an option. That’s all.

FRAZIER: But wiping out regulations probably won’t bring all the coal mining jobs back. That’s because a big cause for coal’s demise is the low price of natural gas. Some of it coming from gas wells nearby.

ZIMMERMAN: No one's knocked on my door and saying, “Hey what can we do to bring back manufacturing? How can we help you help yourselves?” That's my beef. Coal miners can do anything. They can transition to whatever.

FRAZIER: Instead of a return to what once was, Zimmerman wants Trump to help his community prepare for what comes next. I’m Reid Frazier.

CURWOOD: Reid reports for the Pennsylvania program, The Allegheny Front.