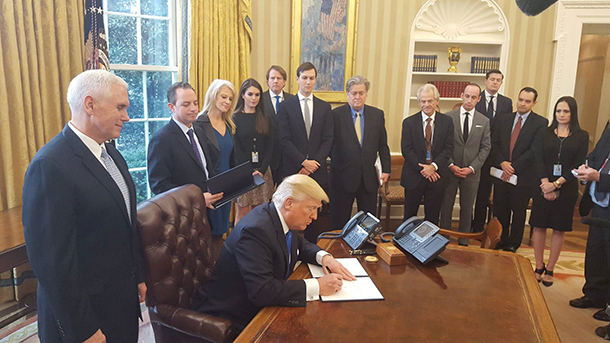 The Trump White House has issued executive orders meant to expedite the construction of the Dakota Access and the Keystone XL Pipelines. For legal insight on this and other climate mitigation plans that could be rethought or scrapped by the new administration, host Helen Palmer spoke with University of California, Los Angeles Law School’s Environmental Law Professor Ann Carlson.

PALMER: Well, the wishes of the marchers on January 21st are strongly at odds with the agenda of the 45th President and the Republican controlled Congress. Donald Trump has already taken bold steps to undo the climate agenda of his predecessor, with gags on staff at environmental and climate-related agencies, such as the EPA and Interior Department, and executive orders to expedite completion of the Keystone XL and the Dakota Access Pipelines.

But not every policy President Obama put in place can be easily overturned, and to explain what the new President and Congress can and can’t do, we contacted Ann Carlson. She’s the Shirley Shapiro Professor of Environmental Law at the University of California, Los Angeles. Welcome, Ann.

CARLSON: Thank you. It's nice to be back.

PALMER: So, many of the climate agenda items that President Obama put in place were done with executive orders. So, can the new president just get rid of all those?

CARLSON: So, for the most extensive and comprehensive policies, that would be the Clean Power Plan and fuel economy standards to reduce greenhouse gas emissions from vehicles, it's not so simple. That's because these rules have actually gone through a very long public notice and comment process, and so to rescind them and then replace them will require something similar. And they do require that the president do something. So, for example, he can't just rescind the Clean Power Plan and refuse to replace it with any kind of measure to reduce greenhouse gas emissions from the electricity sector, which is the Clean Power Plan's focus.

PALMER: Now, the two executive orders that Mr. Trump signed within his first couple of days in office concern the Keystone XL pipeline and the Dakota Access pipeline. He wants to expedite them. What exactly is he able to do?

CARLSON: So, what he's not able to do is simply say, “We approve both of those pipelines, move forward and start working on them.” The Dakota Access pipeline, for example, is required to engage in an environmental review and will continue to be required to do so.

So, he's trying to expedite the process in, I think, two ways: one is to say speed it up. Two is to signal let's approve these, once we get through the review the outcome should be that we approve them. But he can't just order that result without a relatively lengthy review process, and you can bet that there will be lots of legal oversight from environmental groups, from the tribes that are quite interested in what happens to their land and so forth. So, none of this is going to happen immediately.

CARLSON: That's correct. There's a legal challenge right now pending in the DC circuit Court of Appeals that says that EPA went too far in its efforts to regulate the electricity sector.

Statements made by Scott Pruitt at his confirmation hearing cast doubt in the minds of some as to whether the EPA will allow California to keep its ambitious standards for automobile emissions. (Photo: torbakhopper, Flickr CC BY-ND 2.0)

PALMER: Now, Donald Trump appears to feel that the EPA has gone too far. He has put a gag order on that agency and also on other agencies that report on the environment. It seems like he'll be sympathetic to the fact that the EPA went too far, but there's nothing he can do until it comes out of the DC Circuit.

CARLSON: Well, that remains to be seen. The DC circuit has taken the case. I suspect that the next move on the Trump administration's part will be to notify the DC Circuit that the Department of Justice does not intend to defend the Clean Power Plan and may, in fact, intend to withdraw the rule and that will throw the litigation into chaos.

PALMER: Now, auto emission standards are another powerful way in which greenhouse gas emissions can be controlled, and this is an issue that came up in an exchange between the California Senator Kamala Harris and Scott Pruitt in his confirmation hearing.

HARRIS: In your opening statement, you write it is not EPA's mission to be against sectors of industry in general or against particular states. Will you commit, then, to upholding that same standard and recognizing California's authority to issue its own new motor vehicle air pollution standards?

HARRIS: Do you agree to uphold that same standard that has been held by your previous administrators?

PRUITT: I agree to review that as each administrator before me has. It's been granted at times.

HARRIS: Do you agree to uphold it? Reviewing and upholding are two different points.

PRUITT: Senator, as you know, administrators in the past have not granted a waiver and, in fact, have a granted a waiver. That's a review process that will be conducted.

HARRIS: What is your intention, Sir?

PRUITT: I don't know without going through the process to determine that, Senator.

PALMER: What's the importance of this?

CARLSON: Well, this is a really important part of the United States efforts reduce its overall greenhouse gas emissions. Transportation emissions have now surpassed emissions from the electricity sector as the single largest source of United States greenhouse gas emissions, and to address those emissions EPA adopted standards that apply to 2017 to 2025 model year automobiles. The Trump administration has threatened to rescind that rule as well, but here's how this gets really complicated. 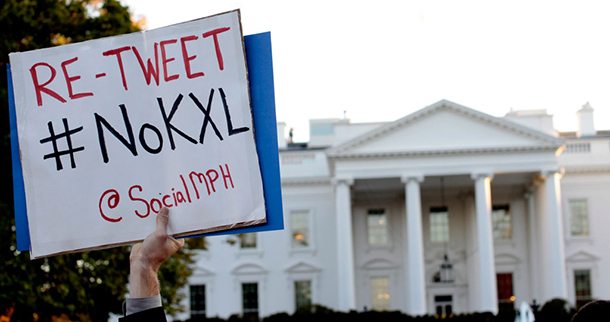 California under the Clean Air Act has its own power to issue greenhouse gas emissions standards for vehicles. It can only do so if it has a waiver from the Environmental Protection Agency. So, if the federal government rescinds its rules, California's rules can kick in and take their place and because California is so big, that's a big chunk of the national auto market. So, I think what Senator Harris was getting at is, will the EPA rescind California's waiver? Or going forward for new passenger automobile standards will it refuse to grant California permission? And it will be an interesting question whether the Republicans’ commitment to states’ rights is stronger than its opposition to environmental policy or vice versa.

CARLSON: No, so I don't think we're going to see a change in market trends that have led to, as you say, a very dramatic reduction in the cost of renewal power, and as a result, a really large expansion of renewable power across the United States and across the globe. There are a few forces that are actually beyond the control of the president that are leading to those changes. One is actually a lot of states requiring that their utilities purchase renewal power or create it themselves, but also massive investment by the Chinese in renewable energy has led to big price drops. Those things are no going to go away. There is a big question about whether the Trump administration will continue to support tax credits for renewable energy. Those have also been really key to getting investments in the renewable sector. I'd be surprised if there is legislation to roll those back, but we may see the ending of them once they expire.

PALMER: How concerned as an environmental law professor are you with the landscape as it seems to be unfolding? 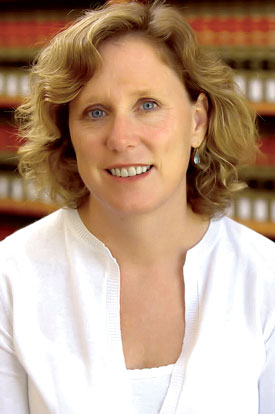 Ann Carlson is the Shirley Shapiro Professor of Environmental Law and the Faculty Co-Director of the Emmett Institute on Climate Change and the Environment. (Photo: University of California at Los Angeles)

CARLSON: I think that this is the single biggest assault we've ever seen against environmental policies. The Reagan administration in the '80s went pretty hard after EPA, but I'm stunned, frankly, so far at what appears to be really overtly hostile acts, like removing EPA's information on climate from its website; gagging EPA scientists and other officials from being able to speak to the press or engage with social media. I could go on, but this is just, appears to be a full-scale assault on every conceivable environmental policy and on even the dissemination of information about environmental problems. We could even see the National Oceanic Atmospheric Administration's research on climate change - really important satellite data that gets collected and so forth - eliminated by this administration. It is extremely alarming.

PALMER: Ann Carlson is the Shirley Shapiro Professor of Environmental Law at UCLA Law School. Ann, thank you very much for spending time with us.

CARLSON: You're very welcome. Thanks for having me on.

LOE segment with more on the legal complications of the CPP

Ann Carlson’s analysis on the Pruitt hearing for Legal Planet