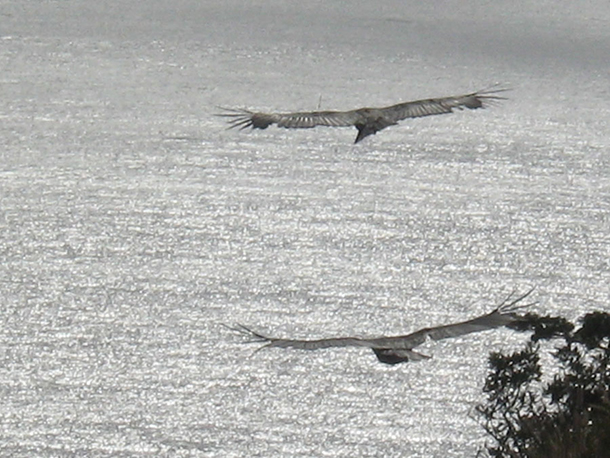 California condors soaring over the Pacific Ocean at Big Sur along the central California coast. (Photo: courtesy of Don Lyman)

The California condor, the largest bird in North America, nearly went extinct in the 1980s, but thanks to captive breeding and release, there are around 400 today. But Reporter Don Lyman explains a possible new threat to the condors: high levels of pesticides and other contaminants from marine carcasses the birds feed on.

PALMER: In a minute, another trip to the place where you live, but first this note on emerging science from Don Lyman.

LYMAN: The California condor is the largest bird in North America, with a wing span of nearly 10 feet. In the 1980s, only 22 of the iconic birds remained. Thanks to captive breeding and release into the wild there are around 400 today. But now scientists have identified a possible new threat to the condors’ ongoing recovery.

The condor is a type of vulture, and, like other vultures, it feeds on dead animals. One potentially abundant food source for coastal populations is the washed-up carcasses of marine mammals, like whales and seals, but researchers say they might not be safe to eat.

Biologists studying California condors have found high levels of pesticides and other contaminants from marine mammals in the tissues of populations of birds living along the central California coast.

The study's authors found that coastal condors had up to 100 times greater concentrations of mercury, chlorinated pesticides, and PCBs than non-coastal populations. And even though the pesticide DDT has been banned in the United States since 1972, the scientists found high levels of DDE, a breakdown product of DDT, in coastal condors and marine mammals.

The danger for condors comes from the contaminants that build up in mammals’ bodies and have been shown to harm reproduction in other birds, so could threaten the ongoing recovery of California condors. Indeed, the scientists estimate that upwards of 40 percent of breeding-age, coastal condors have DDE levels near the levels that caused thinning of eggshells in bald eagles in the 1950s.

Wired: “A Troubling Snag in the Comeback of the California Condor”