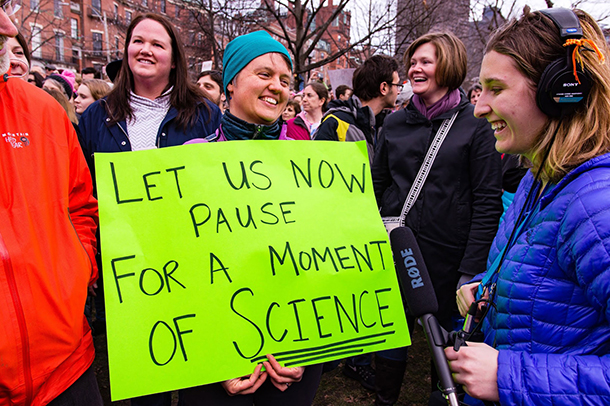 Scientists are planning a “March for Science” in Washington on Earth Day. Above, many marchers held signs about the importance of science at the Boston Women’s March on January 21st, 2017. (Photo: Jarred Barber)

In this week’s trip beyond the headlines, Peter Dykstra and host Steve Curwood note that China doubled its solar capacity within 12 months, and discuss scientists’ newfound political activism. Looking back 45 years, they remember the animated film of Dr Seuss’s The Lorax, and the furry creature’s rearguard action to speak for and protect the trees.

CURWOOD: It’s Living on Earth. I’m Steve Curwood. Time now to consider the world beyond the headlines. Peter Dykstra of DailyClimate.org and Environmental Health News, that’s EHN.org, is on the line from Conyers, Georgia.

Hi, Peter, what do you have for us today?

DYKSTRA: Hi, Steve. I’ve got some sunny news from the other side of the world. China more than doubled its photovoltaic solar energy capacity in the calendar year 2016, and in doing so became the world’s biggest solar-producing nation. China’s National Energy Administration also projected that solar would more than double again by 2020.

CURWOOD: Well, that makes for an interesting dynamic - big growth in China. But how can the U.S. compete?

DYKSTRA: The US probably can compete if it wants to. Solar in China still has a long way to go, and the U.S. is also setting records for solar expansion, but right now, China has about twice as much solar energy capacity. China gets about 20 percent of its energy from renewables, including wind, but a lot of that 20 percent has its own huge environmental baggage, like the Three Gorges hydro dam.

DYKSTRA: Yeah, after literally decades of hope and promise, they’re just about here. And so, at least in this country, is an increase in high-level hostility toward climate and environmental science.

CURWOOD: Yeah, a lot of folks are worried about that.

DYKSTRA: With reports of science, environmental, and climate data disappearing from government websites and a general, unmistakable tone from the new administration that any scientist that conflicts with business interests is under the microscope, if not under the gun, many in the science community seem to be undergoing a political awakening. 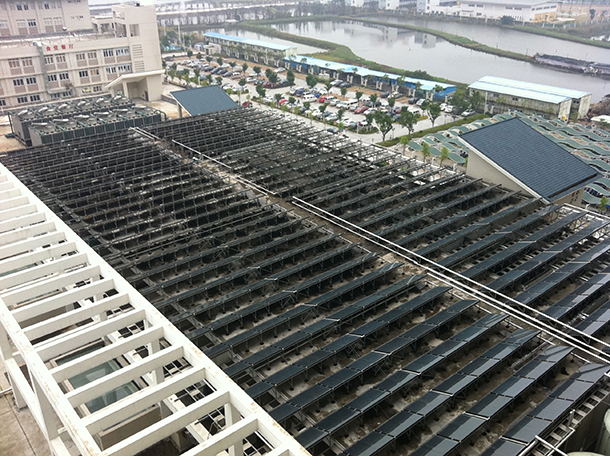 CURWOOD: And that’s pretty unusual, Peter, because the conventional wisdom among most scientists has always been that politics is something to avoid.

DYKSTRA: Maybe not now, if the perception is that politics is about to throw the life’s work of many scientists under the bus. Scientist-organizers – Now there's a concept – are planning a “March for Science” in Washington on Earth Day, April 22.

CURWOOD: Yeah, I’ve got to wonder though, how prepared scientists are to step into the political arena.

DYKSTRA: That many be a problem. It runs the risk of playing right into a Trump narrative. If the science community is seen as part of a cabal with liberals, or Democrats, or environmentalists for a march on Earth Day, the inevitable 3:00 A.M. Presidential tweet will cast scientists as “Enemies of the State”.

March organizers and countless supporters respond that science is under serious attack, and the worst action to take is no action at all. There’s no more time to be a detached scientist, especially on climate and environment issues.

CURWOOD: Yeah, at this point, how much choice is there for scientists?

DYKSTRA: Not much, and I don’t even think that the press and public are aware of the abuse that scientists – particularly climate scientists – take for merely doing their jobs. So, the science community may be facing a huge learning curve on politics, in addition to facing potentially unprecedented political interference. But if any group can deal with a huge learning curve, it’s probably scientists.

CURWOOD: That’s right. They’re always working with new data.
What do we have in this week’s environmental history file?

DYKSTRA: Well, forty-five years ago this week, CBS television premiered “The Lorax,” an animated version of the book written the previous year by the one and only Dr. Seuss.

CURWOOD: And for those folks who don’t know the story of “The Lorax”, give us a quick summary please.

DYKSTRA: Well, Dr. Seuss worked with some of the producers of the legendary Bugs Bunny/Warner Brothers cartoons to tell the story of a forest full of truffula trees threatened by rampant cartoon industrial growth. The Lorax is a stubborn, little, furry creature who “speaks for the trees” because they have no tongues. The TV special re-ran for years and was embraced as an environmental parable around the world, though it was condemned as indoctrination in some communities dependent on the timber industry. 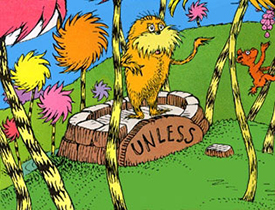 CURWOOD: Yeah, but The Lorax is still a powerful symbol today.

DYKSTRA: True, but I doubt he’s going to be appointed to run the Forest Service any time soon. In 2012, Hollywood re-made the classic, with Danny DeVito as the voice of the Lorax. Since then, it’s taken in $350 million worldwide in theater, DVD, and online sales and rentals.

CURWOOD: Yeah, so now The Lorax can hire somebody else to speak for the trees on that kind of money.

DYKSTRA: But it might not help. Consider the words of the Once-ler, the bad guy who ultimately gets the Lorax’s conservation lesson:

LORAX: Unless someone like you cares a whole awful lot, nothing’s going to get better. It’s not.

CURWOOD: That challenge is still with us some 45 years later.

Thanks, Peter. Peter Dykstra is with Environmental Health News, that’s EHN.org and DailyClimate.org. Talk to you again real soon.

NYTimes: “In Age of Trump, Scientists Show Signs of a Political Pulse”