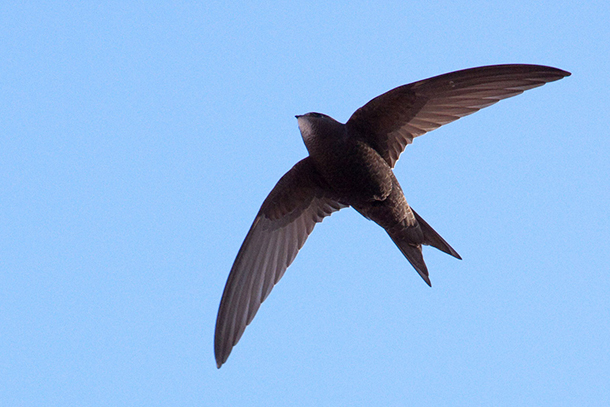 Swedish Scientists have discovered that the common swift can fly for 10 months at a time without landing. Science knows of no other bird that remains aloft for that long. In this week’s note on emerging science, Don Lyman reports that the swifts land for just two months a year to breed in central Europe, but are airborne the other 10 months as they migrate to spend the winter in Africa.

CURWOOD: It’s Living on Earth, I’m Steve Curwood. Just ahead, another visit to the place where you live, but first this note on emerging science from Don Lyman.

LYMAN: The common swift has an evocative name, but maybe it deserves a different label, such as ‘persistent’ or ‘enduring’, because scientists at Lund University in Sweden have discovered that this medium-sized bird, with its 15 inch wingspan, can fly for 10 months at a time without landing. No other species of bird remains airborne for that long.

The researchers followed 13 swifts, some over a two year period, using a device called a microdata log, that was attached to each bird and recorded whether the birds were in the air, where they had been, and how fast they were flying.

Their findings revealed that these common swifts landed for just two months a year, during the breeding season in central Europe. The remaining 10 months were spent in the air, migrating and spending the winter south of the Sahara Desert.

Some of the birds landed for brief periods during the night, but even these birds spent more than 99 percent of the 10 month period in the air. And data from some swifts showed they did not land at all for 10 months.

The scientists said that this new finding raises new questions, such as how the birds deal with high energy needs while flying non-stop for 10 months, and how they sleep in the air. Researchers speculate that the swifts might sleep while gliding from high altitudes.

As well as setting a bird-flight endurance record, this discovery significantly pushes the boundaries of what we know about animals’ physical capabilities.

About the Common Swift on Archive