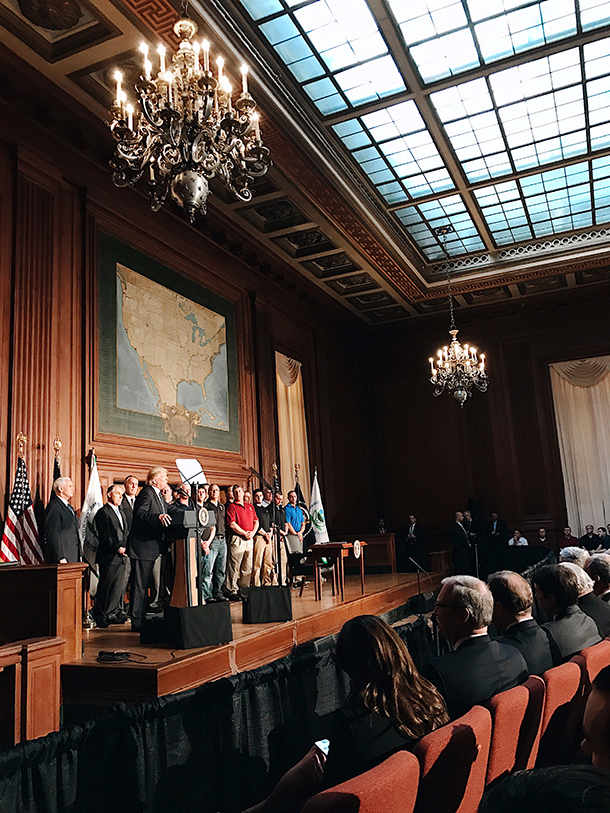 CURWOOD: From PRI, and the University of Massachusetts, Boston, this is Living on Earth. I’m Steve Curwood, in Washington, DC.

Despite an untimely late snowfall and freeze, this city’s famed cherry blossoms were in full bloom March 28.

[CROWD CHANTING “We are unstoppable, another world is possible]

CURWOOD: Environmental demonstrators were outside the White House and the EPA building protesting the latest move by President Trump to roll back climate protection rules. Meanwhile, a phalanx of motorcades from the White House and Capitol Hill converged early in the afternoon at the headquarters of the EPA. Climate change and disruption have been a major focus for the agency for years, but the climate went unmentioned by Mr. Trump and the members of his team, as the President took to the stage to sign his executive order to create energy independence. Instead, according to Energy Secretary Rick Perry, who spoke first, the order was simply about basic pollution.

PERRY: The president with his signature on that executive order is going to set in motion government reforms designed to continue promoting clean air and water for the American people.

CURWOOD: EPA administrator Scott Pruitt defined it a bit more broadly, but he still said nothing about provisions that effectively gut the Obama Administration’s executive initiatives to fight climate change.

PRUITT: The president, by his signature today, is rejecting the narrative that this country cannot be both pro-energy and pro-environment. We have done that throughout our history. We can actually achieve good jobs, good growth and pro energy polices at the same time as protecting our environment.

CURWOOD: But while the speeches may have been short on specifics, the optics were clear. A dozen burly coal miners were up on the stage with the dignitaries, to emphasize that America is abundant with coal. Trouble is, coal is abundant with carbon, making it the dirtiest fuel in terms of generating global-warming gases. And before scrubbers were installed in power plants starting three decades ago, the fine particle pollutants from coal were blamed for as many as 30,000 early deaths a year. Whether it’s carbon, or particulates or mercury or sulfur pollution, the EPA has a congressional mandate to regulate it. But interior Secretary Ryan Zinke was dismissive of efforts by the Obama Administration to reduce the climate and health risks of coal.

ZINKE: You know, our nation can’t run on pixie dust and hope, and the last eight years showed that.

ZINKE: Why is energy independence necessary? Well three things: one is the environment. I’m the steward of our nation’s majesty. I can tell you as a former commander, it is better to produce energy here under reasonable regulation than watch it get produced overseas with none. And I’ve seen it in Africa, in the Middle East. Secondly, is jobs. Jobs matter. Hard-working Americans deserve to have a future. And, lastly, national security. The world is safer when America is strong. And our strength relies on energy. 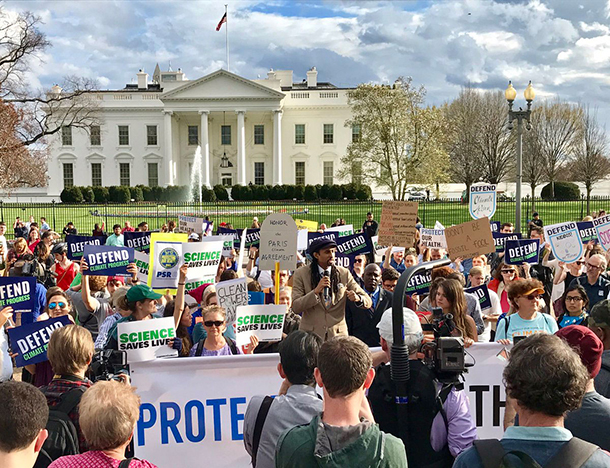 A crowd organized outside the White House hours after the order was signed to curtail federal climate action. (Photo: People’s Climate March)

CURWOOD: But cheap natural gas now generates as much electricity as coal in the US, and coal mines continue to close. Vice President Mike Pence says that’s a matter of concern in West Virginia.

PENCE: Over 130 mines have been shut down since 2009. As today's actions demonstrate, under president Donald Trump, those days are over because the war on coal is over. [APPLAUSE]

CURWOOD: Among those applauding warmly were Senators from the coal states of West Virginia and Wyoming and the CEO of the Murray Energy Corporation, the largest US underground coal mining company with more than a billion and a half dollars-worth of coal reserves in the ground.

CURWOOD: Mr. Trump’s words pleased the crowd, but he didn’t acknowledge that the coal industry has lost only about 20,000 jobs over the past decade. Meanwhile the solar power sector created 35,000 new jobs, in one year alone – 2015 - though admittedly not in the coal country of West Virginia, Kentucky, Ohio and Pennsylvania, states critical for his election victory.

CURWOOD: The president gestured to the miners standing on the stage, their jeans, khakis, and polo shirts giving a down-home, yet determined face to the abstract concepts of regulation and economic trends.

TRUMP: [APPLAUSE] They’re tough looking guys, too. I’ll tell you what. You’re not going to mess around with this group, right. All right. Thank you, fellas. [APPLAUSE]

CURWOOD: President Trump swung into his gift of storytelling.

TRUMP: The miners told me about the attacks on their jobs and their livelihoods. They told me about the efforts to shut down their mines, their communities, and their very way of life. I made them this promise: We will put our miners back to work. [APPLAUSE] We've already eliminated a devastating anti-coal regulation, but that was just the beginning. 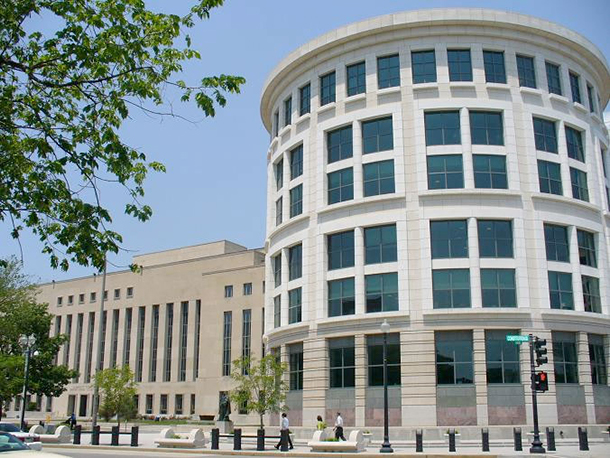 The Clean Power Plan is currently under review by the DC Circuit Court of Appeals after multiple allegations that it goes beyond the constitutional powers of the federal government. (Photo: Michael Weinberg, Flickr CC BY 2.0)

Today, I'm taking bold action to follow through on that promise.  My administration is putting an end to the war on coal. Gonna have clean coal, really clean coal.  With today’s executive action, I am taking historic steps to lift the restrictions on American energy, to reverse government intrusion, and to cancel job-killing regulations. [APPLAUSE] And, by the way, regulations not only in this industry, but in every industry. We're doing them by the thousands, every industry. And we're going to have safety. We're going to have clean water. We're going to have clean air. But so many are unnecessary, and so many are job-killing. We're getting rid of the bad ones.

One after another, we’re keeping our promises and putting power back into the hands of the people. First, today’s energy independence action calls for an immediate reevaluation of the so-called Clean Power Plan. [APPLAUSE] Perhaps no single regulation threatens our miners, energy workers, and companies more than this crushing attack on American industry.

And finally, we are returning power to the states, where that power belongs.  States and local communities know what is best for them. They understand it. They get it.  They’ve been doing it for a long time. It was taken away from them, and not handled well, and they are the ones that we should now, and will now, empower to decide.

CURWOOD: President Trump has ordered the executive branch to stop considering climate change when it comes to issuing most regulations and operating the federal bureaucracy. His executive order also wipes out a program to help cities and states build resilience to climate change-related, extreme weather events, such as storm surges, floods and droughts. Now, it’s more complicated for the President to revise existing agency rules, such as those governing methane emissions that the oil and gas industry finds burdensome. And even as Mr. Trump was leaving the stage, EPA lawyers were already filing briefs at the DC Court of Appeals. The court is considering a case against president Obama’s signature program, the Clean Power Plan to control carbon pollution which hits coal power generation particularly hard. President Trump’s EPA wants to weaken or eliminate that rule. But even if the appeals court goes along it could take years to unwind the Clean Power plan, given the US Supreme Court ruling that carbon dioxide is a pollutant. And though Mr. Trump’s executive order is focused almost completely on climate change, those words were never mentioned.

[SOUNDS OF TRAFFIC ON CAPITOL HILL]

It was a different case up on Capitol Hill. Five Democratic senators - Tom Carper of Delaware, Ben Cardin of Maryland, Sheldon Whitehouse of Rhode Island, Edward Markey of Massachusetts, and Jeff Merkley of Oregon - briefed the press at the same time as Mr. Trump presented his executive order just blocks away down Pennsylvania Ave at the EPA. Here’s Senator Merkley. 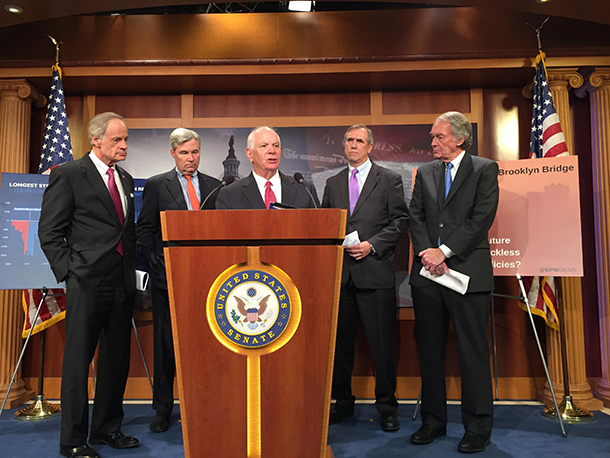 MERKLEY: Thank you, I am honored to be here with this group of five senators who are climate champions, who are fighting for clean water and for clean air and specifically to take on the carbon pollution that’s having such an impact. Carbon pollution is destroying the resources of rural America. It is destroying our forests, our farming and our fishing. The fire season in Oregon is now two months longer than it was decades ago. The streams are warmer and smaller because of the smaller snowpack in the mountains. Over on the coast, we have the difficulty of oysters being unable to reproduce correctly because the water is so much more acidic because the burning of fossil fuels has become carbon dioxide, has become carbonic acid and it is making it very hard for shellfish to start their life. Not to mention, coral reefs around the world, 80 percent of the Great Barrier Reef, dying in the last few years. The list goes on and on and on, wherever you look. So that group of four that is assembled across the city is standing up and saying we are going to try to increase the destruction of our forests, increase the destruction of our farming with less irrigation water, increase the destruction of our fishing. And we are here to say, “No.”

CURWOOD: And though the President called his declaration an executive order to create energy independence, Senator Markey argued it deserved a different name.

MARKEY: President Trump didn’t issue an executive order. He issued a declaration of war on Americans’ climate leadership and our clean energy future. This executive order isn’t about energy security. It is about climate denial. It is the wholesale dismantling of every policy and rule that President Obama put on the books to cut carbon pollution and address climate change. This executive order is one massive giveaway to big coal and oil corporations at the expense of decades of progress on climate change, clean energy, and public health protections.

CURWOOD: Outside the Capitol, there were more cherry blossoms blooming, along with redbuds and magnolias still looking lovely, and if plants have personality, they seemed to defy the wild gyrations in the weather this year. And that would make them rather like people. A recent survey showed a majority of voters in every congressional district say humans are upsetting climate stability, but only a small minority says it has a direct personal impact. And that denial means few voters marked their ballots with an eye towards climate concerns.


Full text of the Executive Order

Trump signing the Executive Order at the EPA