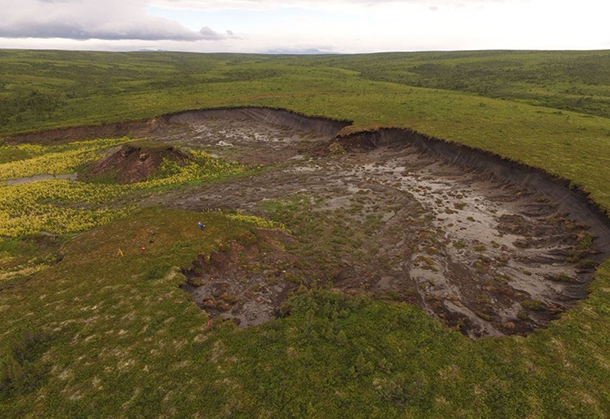 A thaw slump shapes the terrain on the Peel Plateau in the Canadian Northwest Territories (Photo: Jon Tunnicliffe)

WATCHING THE ARCTIC MELT: Permafrost is thawing fast across the world’s polar regions due to global warming. A recent study maps the extent of this thaw over a million square kilometers in northern Canada, and provides insight into likely landscape changes expected soon. Host Steve Curwood spoke to study co-author, environmental scientist Trevor Lantz of the University of Victoria in British Columbia about mapping these disturbances and how ice deposits that melt can cause the ground to collapse.

Permafrost, the subsurface soil that remains frozen year-round in the Earth’s polar regions, is thawing due to climate change. This fact is well known, but less is understood about the scope of the thaw and how it might change the global landscape. A new study maps disturbances in the permafrost over a large swath of Canada’s northwest territory, in particular, what are called “thaw slumps”, areas where melting ice causes the ground above it to collapse. One of the authors of the paper, Trevor Lantz, is an Associate Professor of Environmental Studies at the University of Victoria in British Columbia, Canada, and he joins us now.

Trevor, welcome to Living on Earth.

LANTZ: Thanks for having me.

CURWOOD: So, tell me first, what happens when permafrost starts to melt?

LANTZ: Well, the research that my lab here at the University of Victoria is particularly interested in is permafrost thaw in ice-rich permafrost environments. So, these are parts of the permafrost landscape that have large volumes of frozen water in them, and these areas are particularly vulnerable to warming ground temperatures, which is something that we're seeing across the circumpolar in response to increases in air temperature caused by human fossil use. And one of the kinds of permafrost disturbances that we've been working a lot on are features called “thaw slumps,” and so these are permafrost disturbances that occur in hilly terrain, which is rich in ice. And I really want to emphasize the ice-rice part of this because we're talking about hill slopes that are between 60 and 90 percent ice by volume. And so, when an area like this thaws, you know, the materials that thaw turn into a muddy slurry, and they create an exposure of what we call a “head wall,” and, over time, those exposed sediments continue to thaw and flow downhill, and the disturbances grow and eat their way back up into the landscape. And over time these features can come to occupy quite large areas of terrain. So a typical slump, you know, is between five and 15 acres, but we are starting to see now, much, much larger disturbances. So, some of the features we study are upwards of 75 acres. This is roughly the size of a large shopping mall, like a mega mall.

CURWOOD: So, looking at your research there about permafrost thaw in Canada, how large of an area is this permafrost melting?

A thaw slump on Banks Island in the Canadian Northwest Territories. When thaw slumps gather sediment and flow downhill, the movement of sediment can contaminate lakes and streams. (Photo: Emily Cameron)

LANTZ: Yeah, so up until quite recently we've focused on these disturbances and different forms of permafrost thaw in relatively small areas, and what's unique about our, our recent study is that we mapped areas that are impacted by permafrost thaw across a pretty massive portion of Northern Canada, so, about a million square kilometers. This is I guess about a third of the size of the continental US, and within this area about 20 percent of that landscape is impacted by permafrost thaw. So, that's an area that's a fair bit larger than the state of California.

CURWOOD: So, talk to me a bit about your methodology and how you gathered images of all this permafrost melting.

LANTZ: Yeah, one of the fun things about this recent study is that, because we were keen to map such a large area, we actually enlisted the help of a number of mappers that worked for different government agencies in the Northwest Territories of Canada, and it's the largest area, you know, that's been mapped in this way, and it provides some really unique insights into what's going on.

One of the things that's particularly exciting and surprising, I guess, about our map is that it shows that the distribution of these areas that are impacted by thaw slumps correlates almost perfectly with the position of the Laurentide ice sheet 15,000 years ago. So, this is the continental ice sheet that covered almost all of Canada as recently as about 13,000 ago. So, the disturbances that we're seeing follow the margin of where that ice sheet was 15,000 years ago, and what that tells us is that ice that was created in these environments, as the glacier was receding, or glacier ice itself, was preserved by cold climate and permafrost, and that ice has been preserved for tens of thousands of years and is still sitting in the northern landscapes, and it gives us a sense for the potential change that that will occur in these places. So, the point that we make in the paper is essentially that Arctic landscapes have not fully undergone deglaciation in the same way that southern Canadian or northern US landscapes have.

CURWOOD: Now, you they say it's fun to work on this as a collaborating researcher, but it also points to something pretty ominous, it seems. How will the Canadian landscape be affected by this kind of melting, the increased volume of sediment in lakes and rivers?

LANTZ: Yeah, well, one of the communities that we work in the north are particularly concerned about are the impacts that these disturbances are having on ecosystems and the plants and animals in these environments, and so there's ongoing research that we're involved in and other folks are working on to clarify the impacts that these things are having. In aquatic environments, these disturbances can mobilize huge volumes of sediment. So, one of the features that we've been studying, the large thaw slumps near a community called Fort McPherson, Northwest Territories, we estimate that it mobilizes about 650,000 cubic yards of sediment on an annual basis, and so this material can move into adjacent creek valleys and totally infill those creek valleys. It can also move into the lakes, rivers, and streams where it alters water chemistry, increases the turbidity of those waters and has an effect on food webs that decreases the abundance and diversity of aquatic macroinvertabrates which likely cascades to impact fish. So, we're working to understand the fine-scale effects of these kinds of changes on northern communities and northern livelihoods; so, how do landscape changes like this affect people's ability to hunt and fish and travel in northern landscapes. 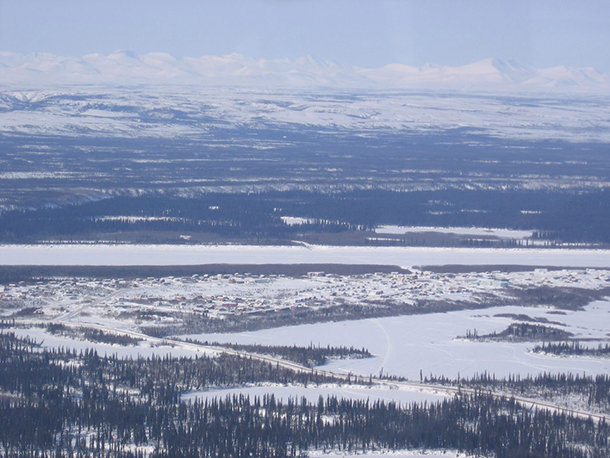 An aerial view of Fort McPherson, Northwest Territories, one of the communities that may be affected by thaw slumps in the surrounding environment. (Photo: Mattcatpurple, Flickr CC BY-SA 2.0)

CURWOOD: People often say that permafrost holds roughly twice the amount of carbon than is found in the atmosphere. What does your study signal in terms of potential release of carbon into the atmosphere?

LANTZ: Yeah, what the consensus around permafrost carbon is that global warming will slowly release those carbon stocks, and so that there isn't this catastrophic potential for a doubling for CO2 in the near term, because gradual warming of those soils will slowly liberate this permafrost carbon stock. The kinds of disturbances that we've been talking about, things like thaw slumps that can really rapidly mobilize permafrost carbon are a different story, and they don't cover, you know, all of the circumpolar north, but they do impact relatively large areas. So, one of the motivations for this work was to better understand how much of the landscape these disturbances impact.

So, I mentioned that this is the broadest scale effort to map these disturbances, and it really only covers half of northern Canada. So, there's ongoing initiatives to better understand the distribution of these kinds of features across the circumpolar north, and that's the information that we really need to better constrain global models and better understand the contribution that rapid – you know, sort of in the next decades -- permafrost thaw will have on the climate system.

The really compelling reason for me to continue to work in the Arctic is because, one, it provides a glimpse into the future of the rest of the planet where similar warming will occur within the decades ahead, but Arctic ecosystems also have a disproportionate effect on the global climate system. So, we need to understand what's happening there to understand how the global climate is going to respond. 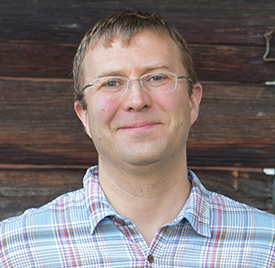 Trevor Lantz is an Associate Professor of Environmental Studies at the University of Victoria in British Columbia and has been researching permafrost in the Arctic for 15 years. (Photo: Kendra Holt)

CURWOOD: What are the solutions here? I suppose the ultimate solution is the refreeze the Arctic. How might we do that?

LANTZ: Well, many of the processes that we've been talking about have already been initiated. So, we're talking about slowing the amount of warming that continues to occur, so it's really a human mitigation issue, stabilizing the amount of CO2 that's in the atmosphere. You know, even if that could happen tomorrow, we're going to continue to see the impacts of these disturbances and the impacts of increasing temperature on Arctic ecosystems for decades-to-centuries to come. The question is, how large will those impacts be.

CURWOOD: Trevor Lantz is an Associate Professor of Environmental Studies at the University of Victoria in British Columbia, Canada. Thanks so much, Trevor, for taking the time with us today.

LANTZ: Thanks very much for having me on.