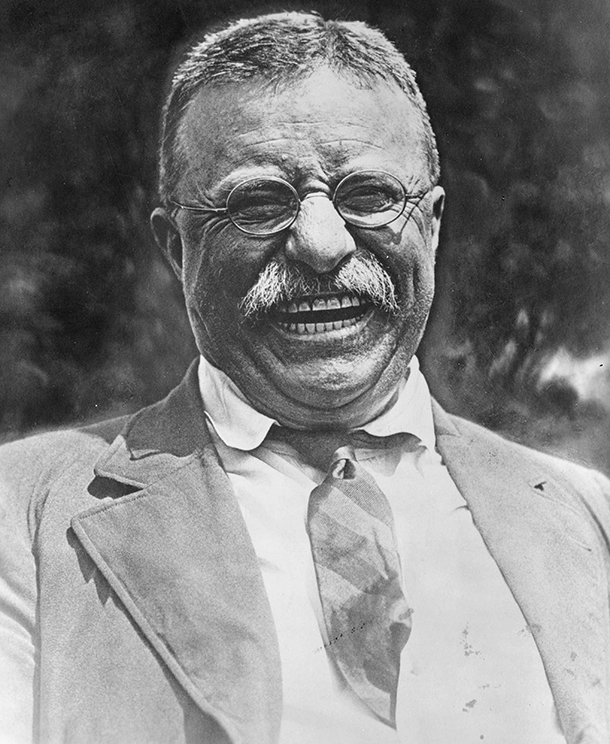 In 1907, Republican President Theodore Roosevelt addressed the school children of the United States in an advance apology for the destruction of nature his generation was undertaking. (Photo: Wikimedia Commons, public domain)

Peter Dykstra returns to Living on Earth this week to discuss what’s beyond the headlines with host Steve Curwood. They consider EPA chief Scott Pruitt’s decision on a pesticide and the latest legal efforts to try to stop the Dakota Access Pipeline. In the history segment, Peter shares an environmental message from a Republican president in 1907.

CURWOOD: Let’s join Peter Dykstra, of Environmental Health News -- That’s ehn dot org and DailyClimate dot org -- now to catch up on the world beyond the headlines. Peter’s been off for a while but is back now on the line from Atlanta, Georgia – how are you Peter, how are you doing?

DYKSTRA: I’m getting better, Steve, I’m on the mend.

CURWOOD: Well hang in there, what do you have for us this week?

DYKSTRA: Well, you’ve just been talking about Scott Pruitt and he’s unsurprisingly showing the same contempt for environmental regulation in his new role as EPA boss as he did during six years as Oklahoma Attorney General. One 25 year EPA employee, Mike Cox, fired off a scorching resignation letter citing “indefensible budget cuts,” among other things.

DYKSTRA: Oh, absolutely not. One of the most conspicuous flashpoints is that Administrator Pruitt ignored his own agency’s scientific advice in lifting an Obama-era ban on chlorpyrifos, also known as Dursban. It’s one of the most widely used agricultural pesticides, used on everything from citrus, wheat, corn, apples, strawberries. It’s also widely used on golf courses. Chlorpyrifos is considered a neurotoxin and believed to cause low IQ and low birth weight in newborns. EPA has placed it off-limits for residential use since the year 2000.

Although construction of the Dakota Access Pipeline began during Obama’s Presidency – this photo is from July of 2016 -- and has been allowed to continue under President Trump, two Democratic senators have sent a letter to the Army Corps of Engineers arguing that building began without the proper permission. (Photo: Lars Plougmann, Flickr CC BY-SA 2.0)

CURWOOD: So, this is at least controversial, at worst really nasty stuff. So, you see this as a sign of how Mr. Pruitt’s EPA will address other issues?

DYKSTRA: Yeah, almost definitely. One has to assume that it is. It’s consistent with what Pruitt has said and done throughout his career.

CURWOOD: Okay, what do you have next for us?

DYKSTRA: In what may be one of the final legal efforts to stop the Dakota Access pipeline, two U.S. Senators, Democrats Maria Cantwell of Washington State and Tom Carper of Delaware, sent a letter to the Army Corps of Engineers contending that Energy Transfer Partners and its contractors may have jumped the gun, building their pipeline under Lake Oahe, before they had permission to do so.

CURWOOD: And of course, that lake is the drinking water source for the Standing Rock Sioux and other tribes.

DYKSTRA: And of course that threat, as well as the disruption of sacred tribal sites are among the main reasons for months of protests and occasionally violent responses. Meanwhile, the Trump Administration has issued an Executive Order granting an easement. The Dakota Access pipeline does not have to obey certain environmental regs or impact assessments.

CURWOOD: And finally, hey, Peter, take a look back at environmental history for us now. What do you have for us this week? 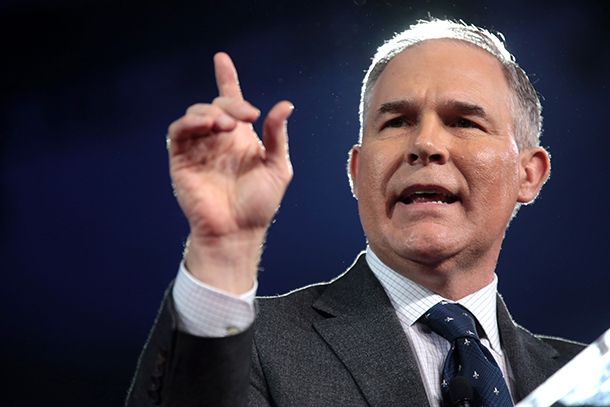 EPA administrator Scott Pruitt is facing a slew of lawsuits and protests against his agency, and also losing some staff members who have resigned. (Photo: Gage Skidmore, Flickr CC BY-SA 2.0)

"We of an older generation can get along with what we have, though with growing hardship; but in your full manhood and womanhood you will want what nature once so bountifully supplied and man so thoughtlessly destroyed; and because of that want you will reproach us, not for what we have used, but for what we have wasted.”

CURWOOD: Boy, it’s a shame we don’t have recordings of statements like that from 1907, huh?

DYKSTRA: Oh, so you’re saying you don’t like the way I read it?

CURWOOD: No, no, no, I’m just saying it would be great to have the wisdom of Teddy Roosevelt on tape.

DYKSTRA: Yeah, in many ways he was a century or more ahead of his time.

DYKSTRA: All right, Steve, thanks a lot and we’ll talk to you soon.

CURWOOD: Peter Dykstra is with Environmental Health News. That’s EHN.org and DailyClimate.org. And there’s more on these stories at our website LOE.org.

Climateconservative.org: “Theodore Roosevelt’s ‘A Message to the School Children of the United States”