Climate Change and Your Health 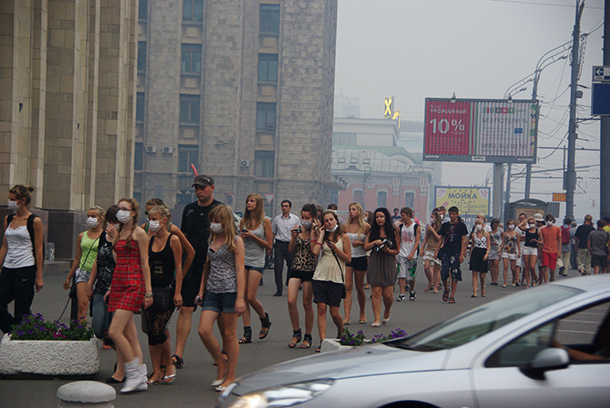 Above, young people in Moscow wear masks during the deadly 2010 heat wave and forest fires in Russia. Air quality declines as a result of high temperatures and wildfires, threatening the health of everyone -- especially children, the elderly, and people with heart conditions and asthma. (Photo: Artem Svetlov, Wikimedia Commons CC BY 2.0)

Scientists and most Americans are concerned about climate change and its effects on our environment, economy, and society. But a growing number of US physicians see a wide gap in the public’s grasp of how global warming does, and increasingly will, affect human health. Dr. Mona Sarfaty, Director of the Medical Society Consortium on Climate and Health, joins host Steve Curwood to discuss her organization’s push to spread awareness of the changing climate’s health impacts.

CURWOOD: Climate change threatens everything from fires, floods, water supplies and property values, but not enough people are aware of the risks it poses to personal health. So says a new organization, representing some 400,000 doctors, called the Medical Society Consortium on Climate and Health.

Mona Sarfaty, the Director of the consortium, explained its purpose.

SARFATI: So, the consortium is formed because physicians are increasingly concerned about the impact that climate change is having on the health of the patients that they're taking care of. There has been a realization by physicians around the country that certain ailments are climate related and that they're becoming more frequent.

CURWOOD: So, this is going beyond insects and other vectors like rodents moving north because it's a little bit warmer. There are even more health related concerns, I gather, now related to climate change.

SARFATI: There is a very long list of problems associated with climate change that is starting to affect people all over the country, although certain areas are certainly more vulnerable than others. There are problems that are associated with extreme weather and extreme temperatures, especially heat waves, fires, floods, deteriorating air quality, but also water quality and damage to crops and even damage to the nutrition that comes with eating those crops.

CURWOOD: So, what kind of diseases are we seeing increase as a result climate change? 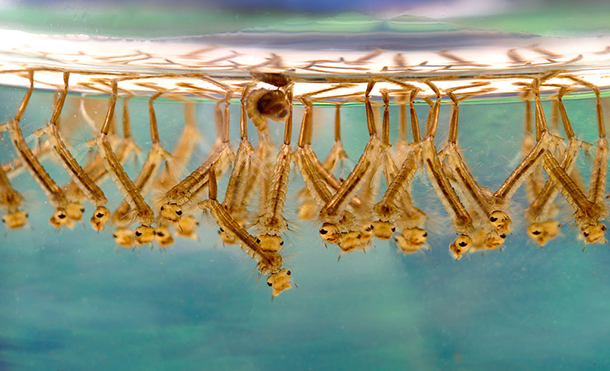 Larvae of the Culex mosquito, which carries West Nile Virus. The rise in the disease in North America in recent years has been linked to climate change. (Photo: James Gathany / CDC, Wikimedia Commons CC BY 2.5)

SARFATI: Lyme disease is one glaring example. A physician from Rhode Island who is one of our leaders talked about his practice and how they used to see two to three cases a month during the warmer season and now is seeing 40 to 50 cases in a season. And of course, then there is West Nile virus which is resident, you know, where there have been outbreaks. We've got the mosquito that carries Zika potentially spreading north. It's already resident in many states.

CURWOOD: Now, as I understand it, your mission statement is based on educating the public and policymakers on the health related impacts of climate disruption. How do you go about that mission?

SARFATI: I'm so glad you asked about that. We had a press conference, and we had physicians from many different specialties talk about what they personally were seeing in their practice, and we issued a report called, "Medical Alert: Climate Change Is Harming Our Health". It's on our website. We've already now delivered it to the public, and now we're delivering it to policymakers. So, we're taking it to members of Congress and to the governors, the National Governors Association, and to the U.S. Conference of Mayors and to policymakers at the state level. We want to open a conversation with everybody about the risks of climate change, the threats of climate change to the health of all Americans.

CURWOOD: Now, your report says that, although almost everybody is, who among us is the most vulnerable and how so? 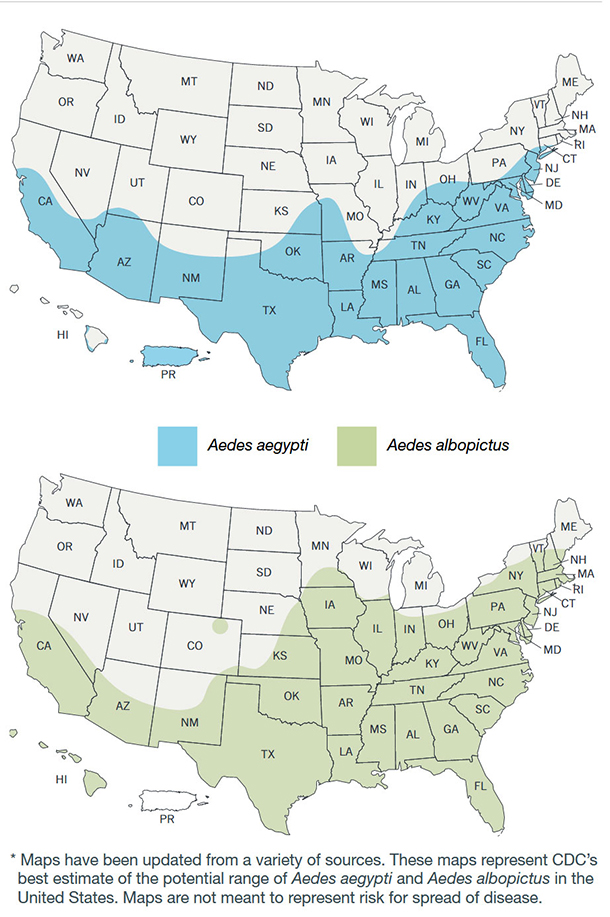 Estimated current range of Aedes mosquitos (Aedes aegypti in blue, Aedes albopictus in green), which have the ability to carry Zika and other viruses. (Photo: U.S. Department of Health and Human Services Center for Disease Control)

SARFATI: So, some people are vulnerable by virtue of their age, and with regard to heat, you've got the very young and the very old. An example of that is that a third of the visits to emergency rooms for heat related illnesses are now school kids playing sports. And then of course people who work outside are more vulnerable to heat, and a lot of people work outside. And when it's hot, air quality worsens because more ozone forms, and then you've got anybody who has a respiratory or cardiac condition who is potentially vulnerable because ozone is very irritating to the lungs. Then some people are vulnerable by virtue of where they live. If you live in an area which is prone to flooding or along the coast, or where there are forests that are dry and are vulnerable to wildfires. And then people who are lower income are vulnerable because when these extreme events happen, they may find it more difficult to get out of harm's way.

CURWOOD: And you mentioned that obstetricians and gynecologists are part of your coalition. What are the particular risks to women from climate disruption? 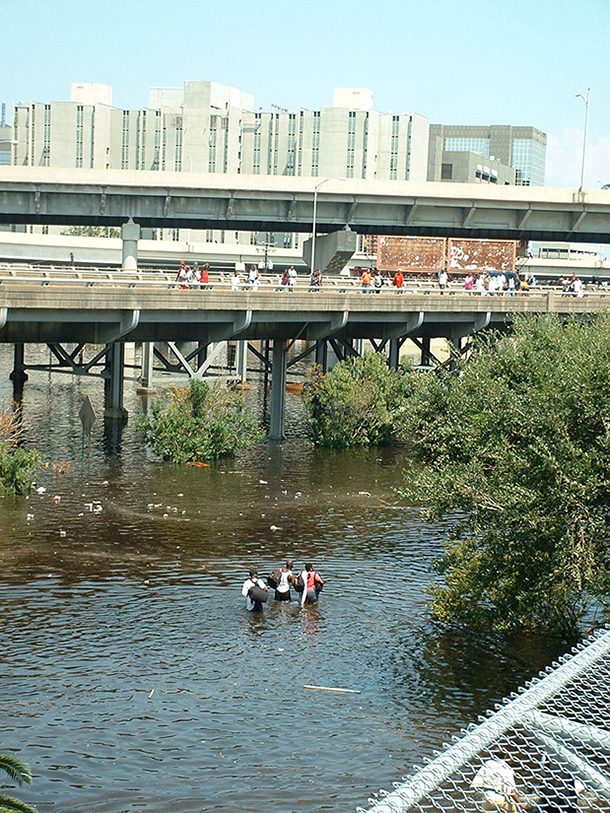 Residents of New Orleans seeking refuge from the flood waters following Hurricane Katrina in 2005. Climate change is expected to have greater impacts on low-income and disadvantaged communities who are already vulnerable to flooding and other issues. (Photo: U.S. Federal Emergency Management Agency)

SARFATI: Women are somewhat more prone to mental health impacts from extreme weather events and the social disruption that is caused by extreme events. But it's also true that pregnancy makes women more vulnerable, and the new president of the American College of Obstetrics and Gynecology spoke about low birth weight and how that can be caused by heat or by poor air quality. So, low birth weight means premature delivery, and premature delivery and saving those babies in the hospital is one of the most expensive pieces of medical care. So, there's a direct connection between these deteriorations that we're seeing in the climate and how that affects pregnant women and then the treatment in hospital in the way that keeps health care cost elevated.

CURWOOD: So, we've seen that since the beginning of the present administration a number of public statements and policies that show that climate change is not a priority at the federal level. How do you think this current political climate is going to affect your approach to educating policymakers and the public?

SARFATI: Well, you know, we have members that have been talking to Congress for quite a while, so there are well established relationships with policymakers. And now we have members of those societies who come from all over the country. At our launch we had somebody from Montana. We have a physician from North Carolina who’s quite outspoken. We have somebody from Louisiana who lived through the recent torrential flooding in Baton Rouge. So, we have physicians who can speak to policymakers from all around the country.

CURWOOD: How do you think public policy should be changed now in response to the emerging threats from climate change? What should public health folks be thinking about? 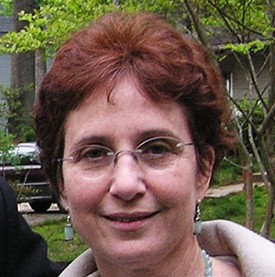 SARFATI: One really important piece of what the consortium is doing is to try to share information with other clinicians, so that they understand what kind of risk their patients are subject to, and they can prepare themselves and their patients despite whatever events may happen. Once people understand that they're at risk, then they can seek to become aware of exactly what those risks are, depending upon where they live or their underlying health condition.

And there's a lot of information out there. We do have heat alerts. People can stay tuned to the heat alerts. We have air quality indices which are carried in the newspaper and various other places. They can understand what the health risks are in their own families, whether they have relatives who have chronic lung or heart disease or kids with asthma and seek to do what's necessary to protect them. There's quite a bit that people can do, but it all starts with being aware that the risks are there.

CURWOOD: Mona Sarfati is Director of the Medical Society Consortium for Climate and Health. Dr. Sarfati, thanks so much for taking the time with us today.

SARFATI: Well, thank you so much. Really appreciate it.


Webinar from The Medical Society Consortium on Climate & Health Launch