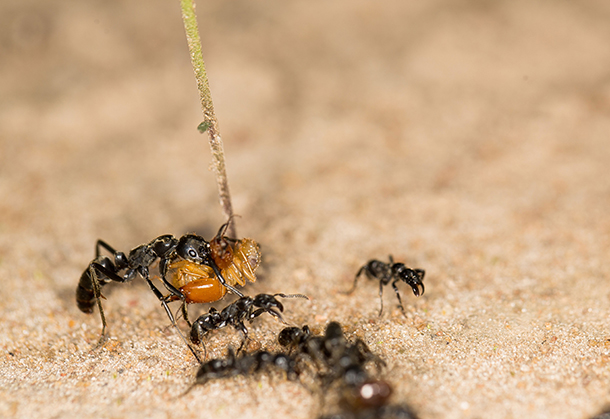 A Megaponera analis “major” carries termite soldiers back to nest, with “minors” walking next to it. After carrying their kill back to the colony, ants return to collect their wounded. (Photo: ETF89, Wikimedia Commons CC BY-SA 4.0)

Researchers from the University of Wurzburg in Germany have discovered that ants in Sub-Saharan Africa are carrying their wounded back to their nest to recover after hunting raids on termites, as Kit Norton explains in today’s Note on Emerging science.

CURWOOD: Coming up, a modest proposal from one of the world’s most famous ant biologists. But first this note on emerging science from Kit Norton.

NORTON: When you think of med-evacs and triage, you probably picture some catastrophic accident. But new research has discovered that ants in Sub Saharan Africa are using similar techniques when they hunt termites.

When termites are out foraging, the termite-hunting ant, Megaponera analis, will attack the warrior caste protecting the foragers. As casualties mount on each side, with ants limping with missing limbs, and termites lying dead, the carnivorous ants collect the termites to take back to the nest.

However, they don’t leave their wounded behind. They also carry injured ants back to the colony to heal. According to the researchers from the University of Würzburg, in Germany this is just another move in what they call the “evolutionary arms race between ants and termites.” And this med-evac behavior is paying off as it has reduced ant combat mortality to nearly zero.

Researchers believe that this behavior is triggered by the pheromones dimethyl and trisulphide in the saliva gland inside the lower jaw of the ant. Between the rescue behavior that returns about as many ants to the colony as are born each day and the recovery of the injured, these ant nests typically see about a 29 percent growth in colony size. So this evolutionary behavior benefits both the individual ant and the entire colony.

That being said, it doesn't help the termites.