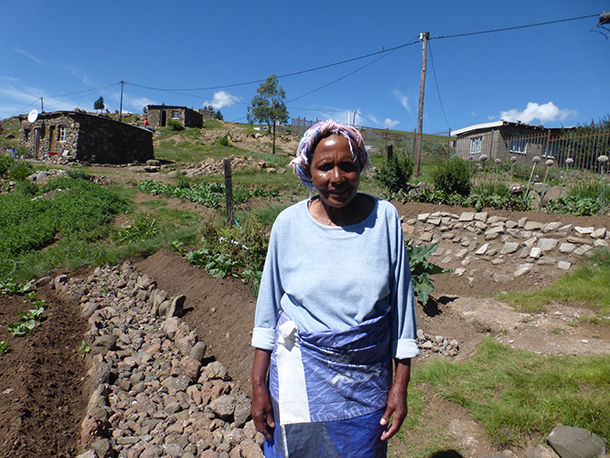 Nasetnaka Ramatse outside her home in Thaba-tseka, Lesotho. (Bobby Bascomb)

Women often fetch water over long distances in Sub-Saharan Africa, and the current devastating drought is not only increasing hunger and disease, it is also creating more opportunities for violence against women. Living on Earth’s Bobby Bascomb reports.

CURWOOD: It’s Living on Earth. I’m Steve Curwood. Drought is stalking parts of Sub-Saharan Africa, as the climate warms, and weather patterns shift. Crops shrivel in the field and livestock die, making the drought a crisis in some areas. For much of the Horn of Africa the seasonal rains have largely failed for the last two years, devastating the region where as many as 17 million people face starvation. For Southern Africa the seasonal rains still come but they arrive late and end early, leaving rural people struggling to find enough water for their households, animals and crops.

As Living on Earth’s Bobby Bascomb reports women are usually the ones who have to fetch water, and in this time of scarcity they are particularly vulnerable.

BASCOMB: A herd of goats, sheep, and cows ambles up a steep mountain road in the tiny country of Lesotho. A shepherd wrapped head to toe in a wool blanket and hat rides alongside on a horse, leading the animals towards a stream for their daily drink.

BASCOMB: Lesotho is an extremely mountainous country, completely surrounded by South Africa. With little flat land for growing food, the majority of people here depend on livestock for their food and income. In times of drought that means herdsmen may spend the majority of their day bringing animals to water. It’s a hard life, but the real burden of drought falls disproportionately on women, like 66 year-old Nasetnaka Ramatse. She stands tall and straight in a colorful wrap outside her small stone house clinging to the side of a mountain. She’s a retired office worker and keeps a tidy garden when there’s enough rain.

RAMATSE: Men and women don’t play the same role. So men didn’t feel that drought as women did because men are not drawing water. They just want to eat. [LAUGHS] So, women are the ones that feel the drought.

BASCOMB: Across the continent it is solely the responsibility of women to collect water and bring it home for drinking, cooking, and cleaning.

RAMATSE: It’s our culture. If you go to the well other men will be laughing at you. They will say, [Speaks Sotho. LAUGHS.] “Your woman has given you something to tame you.” [LAUGHS] They want to wash. They want to have clean clothes, to have food, but from where they get the water they don’t care. 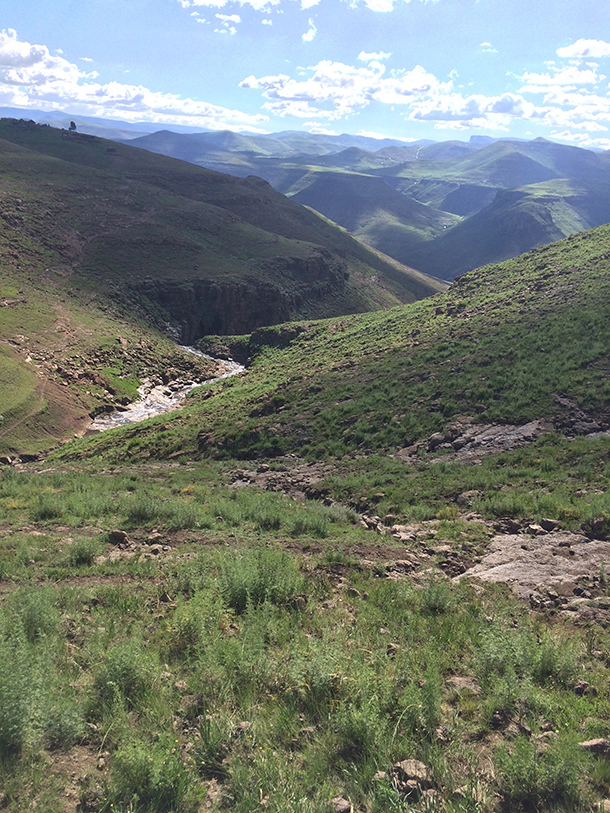 BASCOMB: To get water Ramatse has to walk an hour from her tiny village to town, wait for two hours to fill her jugs, and then walk an hour back up a steep mountain to her house.

RAMATSE: When I come back I am hungry, and there is no food I have to start again and cook. I’ll have to wash, you see, I’m having a grandchild. After washing himself, I’ll have to use that water to wash myself in order to save. That day I won’t do anything except cooking and eating because I will be tired from drawing the water. It affects my day, because my day will pass without doing anything. So, two days, three days will pass then I’ll have to go again.

BASCOMB: In other parts of Africa the drought has been even more personally devastating for women. Asli Mohamoud is an aid worker with Care International in Somalia, where the drought is already causing displacement and widespread famine. She says, before the drought women had a two-mile round-trip journey to get water. But now, because water sources have dried up, they must walk as much as 30 miles to get water for their households. Along the way, Asli says women and girls are extremely vulnerable to exploitation and sexual violence.

MOHAMOUD: In that journey you’ve got women walking alone. There’s no protection. They meet men. Either they tell false and say, “I will marry you or I do this,” and then they use her or they rape her.

BASCOMB: Across much of the region rape comes with a social stigma that keeps many victims silent ... or worse. Asli recounts the story of a 16 year old girl who was raped by an older man.

MOHAMOUD: She lost her virginity, she lost everything. She lost hope. I tell her, I say “This is not your fault this happens all over the world. Don’t lose your hope, continue your life.” Now she is fine but before she meet with me and my team she decided to kill herself.

BASCOMB: Asli says she’s seeing a sharp increase in early marriage for girls. Families will choose to marry off their daughters to have one less mouth to feed at home. Or girls may choose to migrate to cities like Baidoa, north of the capitol Mogadishu, in search of survival. 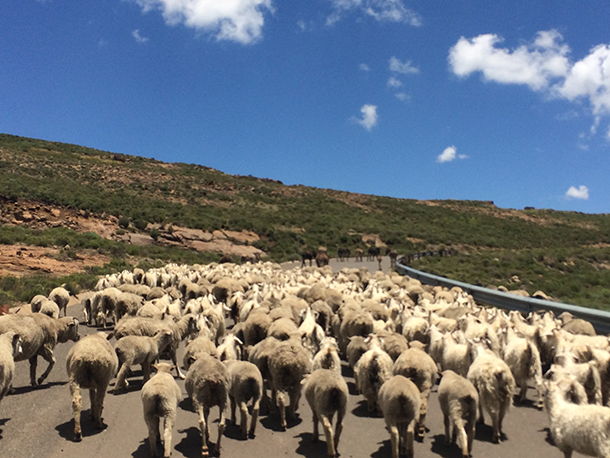 A herd of animals amble up a mountain road in Lesotho. (Mark Fabian)

BASCOMB: As a result, the average age for a girl’s first sexual encounter has dropped significantly. CARE International reports that in Mozambique in 2003, for example, girls’ first sexual experience came at around age 16. But since the drought began it’s closer to 11 or 12. That brings particular danger for childbirth, should the girl become pregnant.

CARE says they’re also seeing a sharp increase in HIV rates. In rural areas where HIV is endemic the rate of infection increases by roughly 11% with every drought, a fact that’s attributed at least in part to earlier sexual encounters and sexual assault. Aid worker Asli says the drought and the struggles women face are personal for her.

MAHAMOUD: I am a Somali woman, and I’m feeling what all Somali women are feeling. Because I am a woman, I am a mother, I’m a wife, I’m a sister, an aunt. So, I like to support ... I like every girl to get her rights.

BASCOMB: But that may not happen. Persistent drought might become the new normal for much of Sub-Saharan Africa. The Intergovernmental Panel on Climate Change predicts that much of the region will become hotter and drier in the future with a changing climate. The seasonal “long rain” should be falling in East Africa now, between March and June. So far, the rains have been disappointing and sporadic leading to fears that the punishing drought will continue. Still, some forecast models are predicting that the end of the rainy season, June, will bring near average rainfall. People across the region, especially women, are praying they are right.

For Living on Earth, I’m Bobby Bascomb in Thaba-tseka, Lesotho.

More from Bobby Bascomb on the drought in sub-Saharan Africa