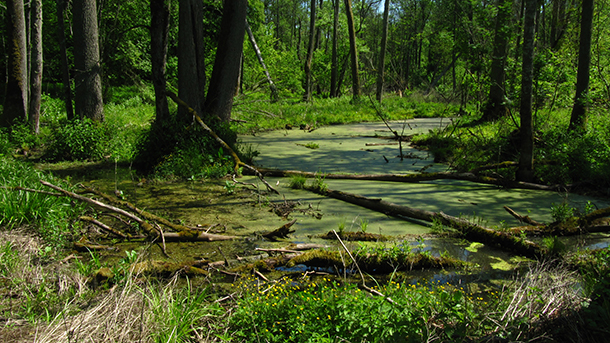 The Białowieża Forest in Poland and Belarus contains some of the last remaining old growth forest in Europe. Protections are strong in Belarus, but some areas in Poland are managed as commercial forest and the Polish government has now authorized a three-fold increase in logging. Living on Earth host Steve Curwood spoke with University of Warsaw Professor Bogdan Jaroszewicz - the director of a research station in the forest - about the ecology of Białowieża and what logging could mean for conservation efforts.

CURWOOD: Environmental activists in Poland are chaining themselves to logging machines in an ancient forest to protect the trees from being cut down, which they, say violates EU conservation rules. The Białowieża Forest is a UNESCO World Heritage site that straddles the border of Poland and Belarus. It’s perhaps the largest remaining primeval forest in Europe, and most of it is in Belarus where it is fully protected. But in Poland about two-thirds is managed as commercial fores, and the government has recently tripled the amount of logging allowed there, claiming it will combat an attack of the Spruce Bark beetle. Yet Professor Bogdan Jaroszewicz, who directs the University of Warsaw’s Geobotanical station in the forest, says the beetle is part of a natural cycle, and logging is only making things worse.

He joins us now. Welcome to Living on Earth.

JAROSZEWICZ: Nice to be here.

CURWOOD: So, how old is this forest and why are people concerned about it being preserved?

CURWOOD: Now, which parts of the forest are protected as a nature reserve, and which parts are open to logging?

JAROSZEWICZ: On Polish side, which covers 62,000 hectares, about 36 percent is protected. The rest is managed by foresters as commercial forests.

CURWOOD: So, if I were to go into this forests, what kind of creatures and nature would I find that is tough to find elsewhere?

JAROSZEWICZ: The most iconic species is the European bison. That's a species which was extinct in wild at the beginning of the 20th century and then was reintroduced to the Białowieża Forest in 1952 and from here it was then arranged for these two other forests or other places in Europe. The Białowieża Forest is also the only place, at least in Poland, where we have Laxmann's shrew, so the special type of the shrew which has an Eastern type of distribution in Eurasia, so further west of Europe it's quite rare. 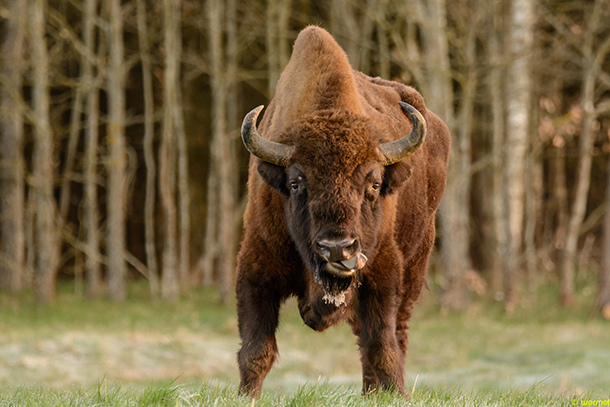 There are also several woodpecker species in many European countries extinct long time ago, like White-Backed woodpecker or Three-toed woodpecker. So those two woodpeckers are associated with dead wood and dying trees, and that's why they are extinct in the other countries and in Białowieża Forest they are in very good shape.

CURWOOD: What's the reason? What are the justifications that the Polish government gives at this point for the increased level of logging in this primeval forest?

JAROSZEWICZ: So, the main justification is that they have to fight with the Spuce Bark beetle outbreak, and that's the main message which they send, that without cutting of dying and dead spruces, the whole forest is going to die. In effect, the government, the Minister of Environment and forest service are say that they are trying to protect European Natura 2000 habitats and species, and they are trying to restore habitats that are degrading because of the Spruce Bark beetle outbreak.

CURWOOD: How credible is this argument of the government, do you think?

JAROSZEWICZ: Well, it is, let's say, credible from the point of your commercial forestry, but they're using to justify economic aims by ecological reasoning. I mean, they are cutting spruces to sell the wood. From ecological point of view it brings rather just damages, and our experience here in the Białowieża Forest shows that it doesn't matter if infested spruces are logged or not. The outbreak stops after some years. 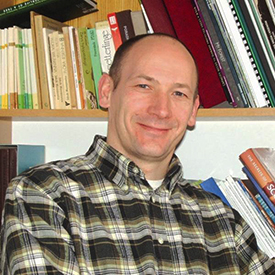 CURWOOD: So, as I understand it, there's some evidence that the rate of logging that is going on now in this forest is against the regulations of the EU. So, tell me, what efforts has the European Union made so far to challenge the actions of the Polish Environmental Ministry about this?

JAROSZEWICZ: So, last year European Commission sent a special mission to Białowieża Forest to check on the ground what is the effect of logging on habitats and species which are protected by Natura 2000 network of protected areas. And then, they asked Minister of the Environment for justification and an explanation of this increased logging rate. As far as I know, our Ministry answered this letter from the European Commission, but logging was not stopped or limited. European Commission may accept the situation or may send the case to European Court of Justice, and that means that then we'll have a problem as a state.

CURWOOD: Talk to me about your research at your geobotanical station there. What are you doing now, and how, if at all, are your studies going to be affected by this increase in logging?

JAROSZEWICZ: So, our station's let's say speciality are the so-called long-term studies. We have several projects which run for 50 or over 50 years. We are also studying biodiversity of plants, bryophytes, and lichens, how forest is reacting on changing environmental conditions, and that's generally in core area of the national park, so logging doesn't impact this part of our research. But we have also several projects which are carried in the commercial part of the forest, and there we for example, have lost several permanent plots due to logging. Simply, when the forest was logged, the whole plot was damaged and we are not able to reestablish it. So, we are losing part of our data and part of our projects, and that's the main problem.

CURWOOD: Bogdan Jaroszewicz is a biology professor at the University of Warsaw and the director of the Geobotanical Station in Białowieża Forest. I want to thank you for taking this time with me today.

JAROSZEWICZ: It was a pleasure.


Learn more about the Białowieża Forest

Białowieża is a UNESCO Heritage Site

Phys.org: The EU may step in and enforce logging limits