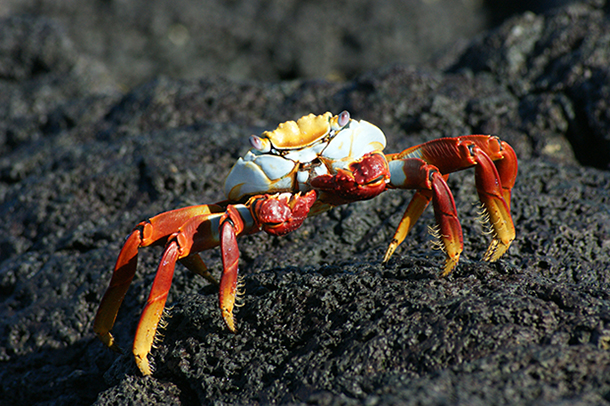 Despite a century of research, malaria remains a major health threat, killing as many as half a million a year. Now Chinese scientists have found crushed crab shells mixed with a common chemical and sprayed over reservoirs effectively kills mosquito larvae, as Living on Earth’s Don Lyman reports.

CURWOOD: In a minute – the dark side of the brightly colored aquarium fish -- but first this note on emerging science from Don Lyman.

LYMAN: Despite over a century of prevention research, malaria continues to be a serious global health problem, particularly in Asia and Sub-Saharan Africa. The World Health Organization estimated that in 2013 there were nearly 200 million malaria cases and over half a million deaths. Though organophosphate insecticides are effective against mosquitoes that carry and transmit malaria, they can be toxic to many other insects and animals, including humans.
Now, scientists from the National Taiwan Ocean University have discovered a new and possibly environmentally friendly way of decreasing the spread of disease-carrying mosquitoes, by heading to the seashore. The researchers crushed oven-dried crab shells to extract chitin, a natural non-toxic substance also found in birds’ beaks and insect exoskeletons. It’s been used to manufacture such products as membrane water filters and biodegradable food packaging.
The researchers mixed the chitin with silver nitrate, a common laboratory chemical, to produce a solution of silver nanoparticles. They then sprayed this solution over six reservoirs at the National Institute of Communicable Disease Center in India. Even in small concentrations the solution killed mosquito larvae effectively, especially during the early stages of development, without affecting goldfish that also feed on the larvae.
The scientists concluded that chitin-silver nanoparticles are relatively easy to produce, stable over time, and strongly reduce mosquito populations. And because of its abundance in nature, chitin is cheap, and the amount of silver required is so limited that the treatment would be cost-effective.
That’s this week’s note on emerging science. I’m Don Lyman.


Link to the original study

Centers for Disease Control and Prevention information on Malaria