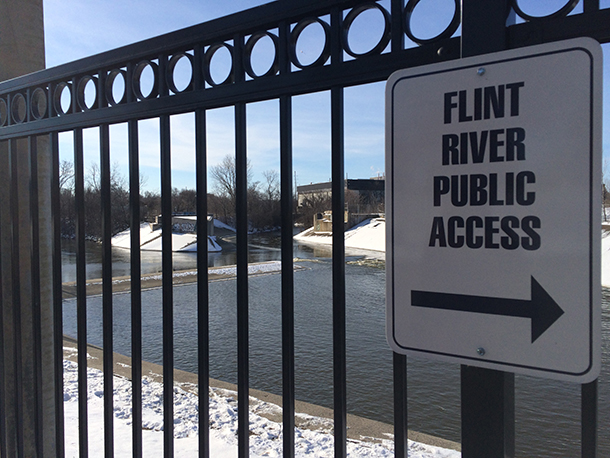 On June 14th, Michigan Attorney General Bill Schuette brought indictments against Michigan Health and Human Services Director Nick Lyon and four other state officials for involuntary manslaughter related to their alleged failure to act in the Flint Water Crisis. Schuette claims the lead-contaminated water in Flint led to a deadly outbreak of Legionnaire’s Disease that the state employees failed to warn the public about. For legal insight into this unprecedented event, host Steve Curwood spoke with Vermont law School’s Patrick Parenteau.

The attorney general of Michigan has charged the director of the state’s health department and four others with homicide in relation to the Flint water crisis. AG Bill Schuette indicted the five on counts of involuntary manslaughter in connection with an outbreak of Legionnaires’ Disease linked to the lead-contaminated water. Legionnaires’ apparently killed at least one man in Flint and maybe as many as twelve or even more. To put this in context, we turn now to Vermont Law School Professor and former EPA regional counsel, Patrick Parenteau.

Welcome back to the program, Pat.

PARENTEAU: Thanks, Steve. Good to be here. 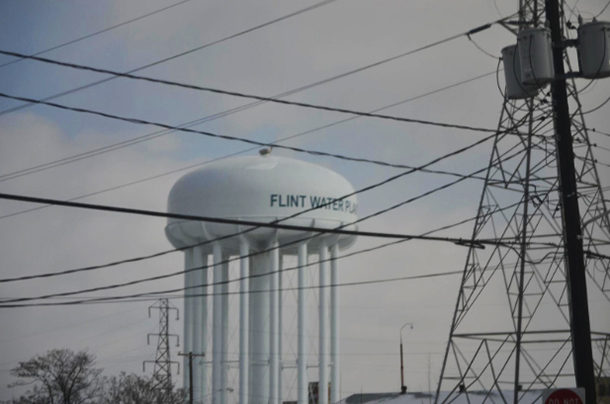 CURWOOD: So, charging local officials with involuntary manslaughter. What kind of precedent does this set?

PARENTEAU: I think it's historic. I can't think of another environmental disaster where five senior state officials have been charged with involuntary manslaughter for failing to warn the public about, in this case, the outbreak of Legionnaires’ Disease which was associated with the lead contamination problem in Flint. This is a huge development in environmental criminal justice in America.

CURWOOD: So, we have five public officials here charged, including Nick Lyon, the Director of the Michigan Department of Health and Human Services. Who are the others and how are they linked and what exactly are the charges? 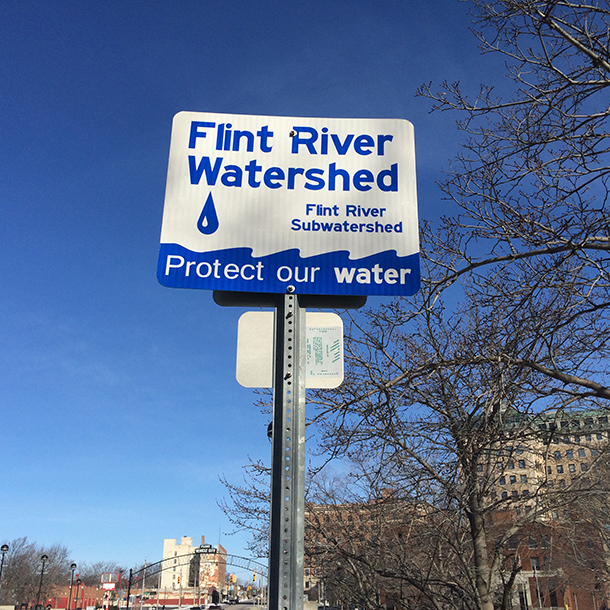 Along the Flint River are a variety of signs urging people to protect the watershed. (Photo: Elizabeth Malloy)

CURWOOD: What steps did Lyon take - Nick Lyon is the Director of the Michigan Department of Health and Human Services - What did he do that made him vulnerable to this charge?

PARENTEAU: Well, the allegation is that he knew about the Legionnaires’ disease outbreak and the, at least potential if not definite, association with the switch to the Flint River water supply, and the allegation is that he knew about this a full year before he announced anything to the public and warned the public. This was after people were dying, in fact, and then when he was questioned by the media, he said, "Well, people die all the time. I can't be expected to prevent all the deaths in Flint." Obviously that's some very, very serious charges against a public official. 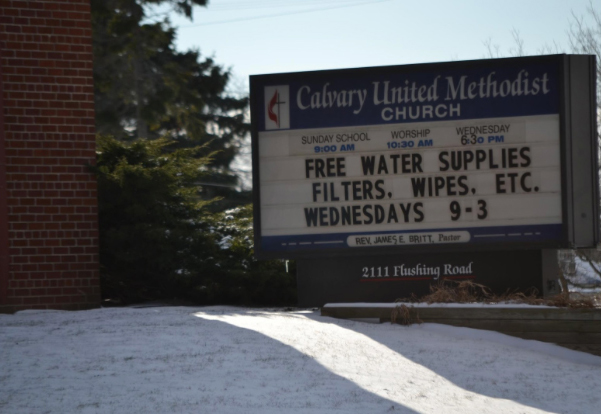 Many churches in Flint, Michigan have become major providers of every day resources for the community. (Photo: Elizabeth Malloy)

CURWOOD: Mr. Lyon works for Michigan's governor. Where is the Michigan Governor Snyder in all of this? What’s he saying and what are the risks that he would run of being charged as well?

PARENTEAU: Well, right after the indictments were announced, Governor Snyder came out with a very strong public statement expressing continued support for Lyon and the other key officials that were charged. Attorney General Shuette posed some questions to Governor's office which the governor declined to respond to. Some people have called for the attorney general to actually subpoena the governor, put him under oath, and ask him the same questions. The attorney general has yet do that. At his press conference, Shuette said he didn't have enough probable cause to charge the governor, but they also left open the possibility that this investigation was still ongoing, and that of course, when you start squeezing some of these defendants now, who knows what kinds of more information may come to light. The governor is not free and clear.

CURWOOD: Now, some of that argument is these charges are politically motivated. What's your take on that?

PARENTEAU: Well, Shuette's running for governor, so there's always some element of, are prosecutions politically motivated? I mean, so you can look at him as a hero or villain, I suppose, depending on where you sit.

CURWOOD: Now, Darnell Earley is the state appointed emergency manager for Flint, once the state took over Flint and involved in the original decision to use that river water. Pat, what's your feeling about the relationship of these charges to the anger that has been directed at him and the other officials in light of what happened? 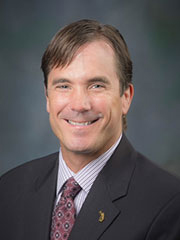 PARENTEAU: Well, the anger is certainly justified. I mean, he made a decision based on budget savings that would've saved on the order of hundreds of dollars per day to treat the Flint River water with the chemical that would have prevented the corrosion which released all that lead into the system. So, for saving that amount of money, you not only put all of these families and children at risk of lead contamination, but you triggered this Legionnaires’ Disease outbreak which took the lives of 12 people. That's a pretty high price to pay for saving the city's budget.

CURWOOD: So, moving forward, what are the next steps here?

PARENTEAU: Well, of course, there will be motions on the defense counsel, who have not surprisingly said this is an outrage and it's a case of prosecutorial abuse. So, there will be lots of motions challenging the basis for the indictment, but the real question is, are all these people going to insist on either a jury trial or a bench trial in front of the judge? You know, I can't imagine the jury in Flint, Michigan, being terribly sympathetic to these individuals, so there could be some kind of an argument about undue publicity, a change in venue, but the courts are reluctant to transfer venue away from the community that's affected by these alleged crimes. I really think we're going to see some plea agreements. I can't believe all five of these individuals are going to roll the dice and opt for a trial on these questions.

CURWOOD: To what extent is this case an environmental justice case? If it is, what are the elements to make it so?

PARENTEAU: Oh, it clearly is. I mean, this is a community with 41 percent of the population below the poverty line, 50-plus percent African American, overlooked, frankly, by the state officials. As horrible as the Legionnaires’ Disease outbreak was which resulted in these multiple deaths, the truth is that the kids who were poisoned by this lead contamination problem are going to have to live with the rest of their lives, and the city itself is still a long way from having even a safe supply of water years after this episode occurred.

CURWOOD: In your opinion as a legal expert, what are the odds that you think these officials could actually be found guilty on these latest charges?

PARENTEAU: My guess is that they won't be able to convict all of these people, but it's just a guess, but there's a real possibility here that somebody is going to do serious hard time in the penitentiary. 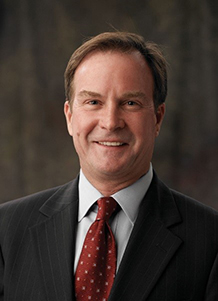 CURWOOD: Well, we're all going to be watching this very closely. Let's just take a moment, Pat, to change subjects here. The head of the US Environmental Protection Agency recently said that he's not going to target the state of California and its EPA waiver for stricter pollution controls for vehicles there. And of course, that's key to California's whole climate protection plans there. What do you think about that decision?

PARENTEAU: I was surprised in Pruitt saying that EPA will not revisit the waiver for the California standards. That's a signal, I guess, that EPA is not going to try to roll back the fuel economy standards. I want to see more before I'm going to rely on that, but it's a curious signal that Pruitt just sent on that point.

CURWOOD: Patrick Parenteau is a professor of law at the Vermont Law School. Thanks so much for taking the time with us today, Pat.


Centers for Disease Control and Prevention info about Legionnaires’ Disease

NPR: “Lead-Laced Water In Flint: A Step-By-Step Look At The Makings Of A Crisis”

Other criminal charges in relation to the Flint water crisis