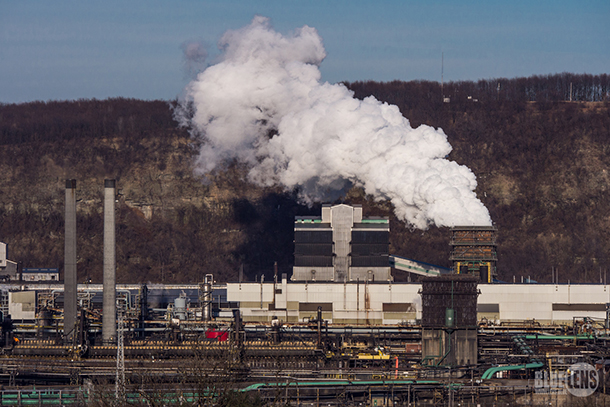 People who live in and around Clairton, about 15 miles south of Pittsburgh, are suing US Steel, claiming air pollution from its Clairton Coke Works has lowered property values. The Allegheny Front’s Julie Grant visited Clairton to understand how this source of good jobs could also be the cause of health and environmental problems.

CURWOOD: Indoor dust poses one set of risks while tiny particles and acid-forming chemicals from industry can affect the air of an entire town or region. So people who live and breathe in and around Clairton, about 15 miles south of Pittsburgh, are suing US Steel. The class action lawsuit claims air pollution from the company’s Clairton Coke Works has lowered property values. Not so long ago, the coke plant was seen as a source of good jobs and prosperity, but as awareness of the health effects of pollution grows, attitudes are changing, as Julie Grant of the program Allegheny Front discovered.

GRANT: The US Steel Clairton Coke Works is in Richard Ford’s blood. He joined the rest of his family, and worked there as a young man.

GRANT: You get the picture. And in this lower income community, those have been good jobs. Ford remembers 10 or 15 years ago, people from nearby wealthier communities, Mount Lebanon and Upper St. Clair, came to Clairton to talk about pollution from the mill.

FORD: We ran them outta here. Because the mill was the best job in town. We said, “How are you going to tell us? We live here. You go to Upper St. Clair and keep living like you’re living, and we’re going to stay right here.” And this was the argument I’m telling you we had, as long as there’s smoke coming from the mills, we’re eating, we’re drinking, and we’re driving good. We’re sending kids to college. We thought that was alright. 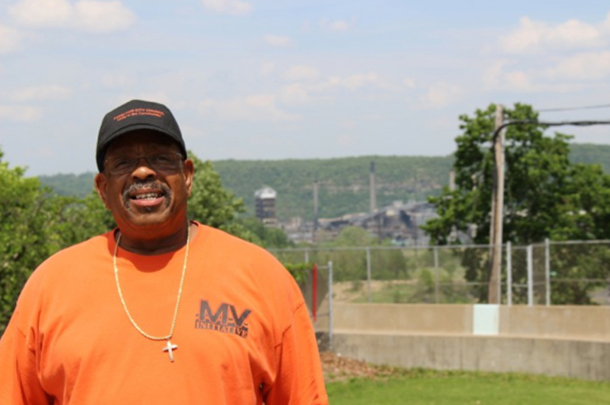 Just about every member of Richard Ford’s family has worked at Clairton Coke Works, and three members of his immediate family have died prematurely from disease. (Photo: Julie Grant)

GRANT: They knew the mill was causing pollution. Making coke is dirty business. The plant brings in coal, burns it at high temperatures, and then quenches it with water. You can see the steam this creates blowing out of quench towers into the air. People here are used to the stench, and the heavy cloud of pollution that can hang over the Mon Valley. And Ford can still picture hanging white sheets on the clothes line as a kid. By the time they dried, the sheets would be grey.

FORD: Our parents would hit a broom on it, and all the stuff would drop off of it. You could literally see it. And the sheets were white.

GRANT: Air quality has improved since Ford’s childhood. US Steel spent a half-billion dollars to replace one of its old coke oven batteries, with environmentally friendlier technology, as well as new quench towers, and other upgrades. And while there are still many concerns about the plant’s pollution, Ford, who is a now member of Clairton city council, says people have long depended on those jobs, and the schools on the tax money that comes from US Steel. But he’s been starting to wonder if the costs of the mill are still too high for Clairton.

FORD: In my own family, my dad died of cancer of the trachea. I had daughter that died at the age of 25 with scleroderma. My son passed away this past October with prostate cancer.

GRANT: Others I spoke with here offer similar lists, family members who are sick, or died of cancers and other diseases. And Ford says they’re starting to look at the coke plant with new eyes.

FORD: It’s an awareness now that’s just sparked in us. And we’re ready to listen now, and try to do something about it because it’s so apparent to us.

GRANT: Some people living near the plant have just filed a class action lawsuit, claiming the pollution has lowered their property values. But can Clairton and other communities in the path of plant’s emissions really prove that their health problems are caused by US Steel’s coke plant?

GRANT: Jim Kelly is deputy director of Environmental Health at the Allegheny County Health Department. Clairton Coke Works violated its air permit 6700 times between 2012 and 2015. Kelly says the Health Department reached a new consent decree with US Steel to reduce pollution last year. And yet, the Mon Valley still does not meet federal air quality standards for sulfur dioxide and fine particulate matter. Those pollutants can cause lung problems and other health issues. A new countywide survey released by the health department finds that cancer rates in Clairton are slightly higher than the county as a whole. But the plant’s emissions blow toward Braddock, a small community with its own US Steel facility. Cancer rates there are double the rest of the county. But, Kelly says, it’s not easy to pin diseases on US Steel. There are so many reasons people get cancer, especially in low income areas. 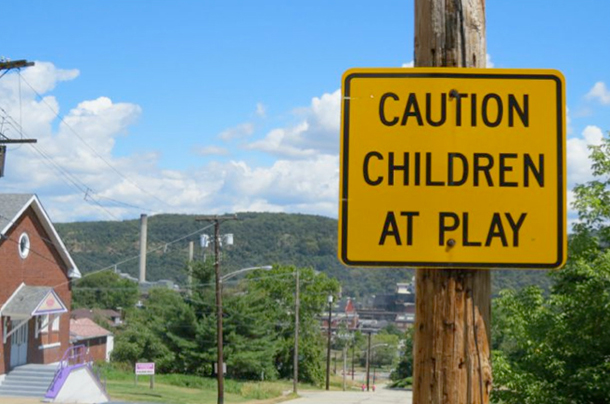 KELLY: You’ve got high smoking rates. You’ve got old housing stock, with lots of asbestos, lung cancer right there. You have low education. You have high unemployment. You have high obesity rates. All of these things are correlated with those same things.

GRANT: Researchers around Pittsburgh are trying to tease out the role air pollution plays in cancers and other diseases. One new study finds that underprivileged children in Clairton, and other Allegheny County communities near smokestacks, are twice as likely as other children in the region to have asthma. Clairton’s kids are three times more likely to have asthma than kids nationwide.

DOUGHERTY: Some day when the air quality is really, really bad, I would like someone to go into any first grade, anywhere, and say, “We’re going to take your kids on a field trip to US Steel.”

GRANT: Shelly Dougherty recently moved to Jefferson Hills, right on the border of Clairton, two miles from the plant. She wasn’t happy when she noticed what she calls the smell of a dirty gold fish bowl.

DOUGHERTY: And we’re going to sit them in front of the steel mill for eight hours and let them breathe in that air. And I want to see how many parents would say, “Sure, let’s bring our kids down there to breathe that air.”

GRANT: Why would we do that?

DOUGHERTY: Then why should the children of Clairton have to do it every day?

GRANT: I met Doughterty because she agreed to work with researchers at Carnegie Mellon University. They came out and put an air quality monitor on her house. She heard about the project on Clairton’s Facebook page. And I should mention that Shelly is not her real name. She asked us not to use it because she got some nasty comments when corresponding on the site about air quality in the area.

DOUGHERTY: What he said was, something to the effect of, “F-U, we need our jobs.” So, yeah, I took the post right down because I didn’t know who this person was.

GRANT: So you were scared?

DOUGHERTY: Well, yeah, because that’s the way it is out here. It’s one of two ways. People either feel like I do, or they look at people like me, like, you’re trying to take our jobs. And that’s not the case at all. No one wants to take away anyone’s jobs. All we want is for US Steel to abide by regulations. 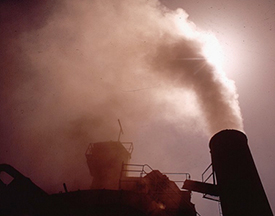 It is difficult for Clairton community members to prove that their health problems were caused by pollution from the US Steel Coke Plant. (Photo: Gene Daniels, Wikimedia Commons)

GRANT: We contacted US Steel for this story but didn’t hear back. The local Steelworkers Union says they’re not concerned about the Clairton Coke Works closing down. They’re currently hiring. And the Allegheny County Health Department says they’re working on a plan for the Mon Valley to meet Clean Air Act requirements by October. If the region doesn’t meet those standards within a year, the federal government will take over. I’m Julie Grant.