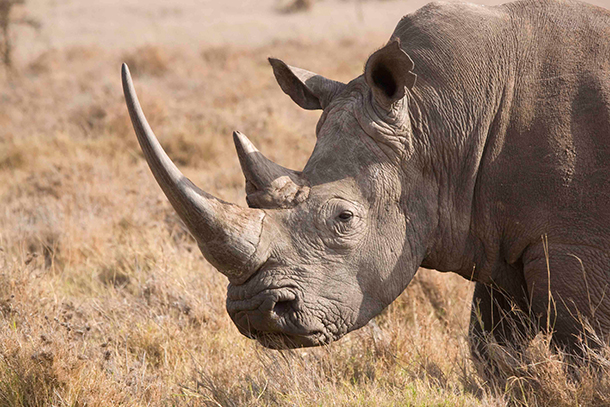 With rhinos on the verge of extinction, conservationists are turning to novel efforts to prevent poaching. Living on Earth’s Bobby Bascomb reports on how a DNA database in South Africa is helping law enforcement agents identify the origins of seized rhino horn in order to deter poaching.

CURWOOD: Some of the most threatened animals on the planet live in Africa, and none face more dire threats than rhinos. It seems a rhinoceros is killed every day or so, as poachers go after their horns, which are lucrative commodities in the Asian traditional medicine trade. With just 25,000 or so rhinos left in in the world, the threat of extinction looms large. But now an international database that keeps track of 75 percent of them is offering some hope. This database is housed in South Africa, and from Pretoria, Living on Earth’s Bobby Bascomb reports on what it does, and how it may help save this iconic animal. 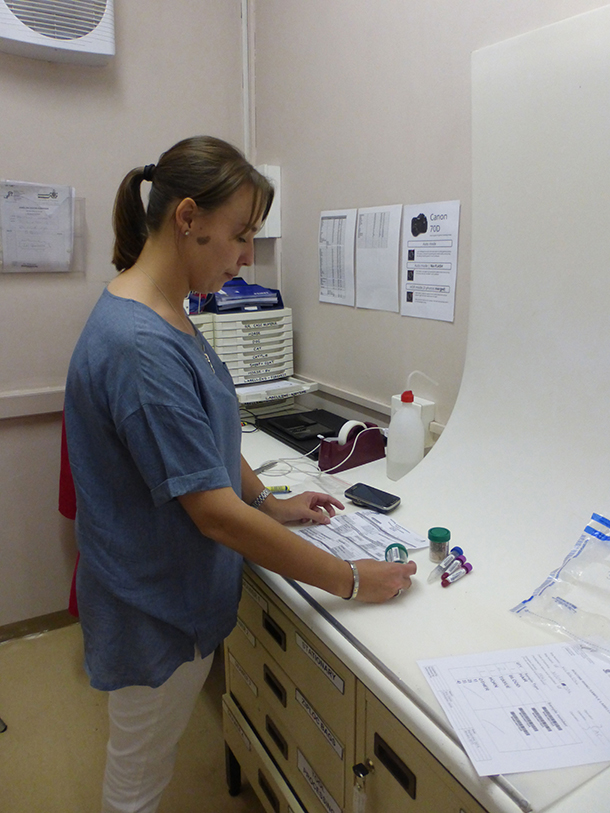 Amy Clark, a laboratory technician at the Veterinary Genetics Lab at the University of Pretoria. (Photo: Bobby Bascomb)

BASCOMB: Brittle yellow grass gently blows in the wind at the black rhino game reserve near Pilanesburg National Park in South Africa. Mathew Soekoe is a field guide here. Driving a safari truck he scans the familiar landscape and points towards a nearby fence.

SOEKOE: We’ve had two rhinos poached on our concession this year, both of them right behind us over here, where the poachings took place right next to each other. The one was successful, they did get the horn, and the other one, we kind of distracted them a bit earlier, so they weren’t successful in getting the horn, but unfortunately killing the rhino.

BASCOMB: Stories like that are extremely common here. So common that South African law requires that a tissue sample must be collected any time a rhino is moved from one park to another or receives medical care. The sample is used to create a DNA profile for each animal that can be recorded and, in case the animal is ever poached, can be matched to confiscated rhino horn.

[FREEZER DOOR CLOSES AND A SAMPLE BAG IS OPENED]

CLARK: What I’m going to be doing is I’m opening a routine kit from a live rhinoceros that has been collected in the field.

BASCOMB: Amy Clark is a laboratory technician at the Veterinary Genetics Lab at the University of Pretoria. She opens a plastic bag to examine small tubes holding rhino skin, hair, and blood. She pulls out a piece of paper with information about this specific rhino.

CLARK: We know from this particular animal that it is from a male white rhino. It is from Limpopo province, in South Africa. And this was from a live rhino.

BASCOMB: Clark carries the samples down a hall to the sample preparation room where technicians pound rhino horn to a powder or cut off a small piece of tissue to examine. Then they add the samples to a solution and heat it.

CLARK: The heat causes the cells to break open and release the DNA. And from there we take that solution to a machine that uses magnetic beads to pull the DNA out of solution, so we can get a good quality DNA profile.

BASCOMB: The veterinary lab has a forensic analysis for roughly 18,000 rhinos. That’s nearly three quarters of the total population, and they hope to eventually register every rhino in the world. The rhino registry helps officials prosecute poaching crimes. Dr. Cindy Harper is the director of the lab. She says criminals in possession of illegal material like rhino horn might get a slap on the wrist, but when they’re linked back to a dead rhino -- a crime scene -- they’ll get a much harsher punishment.

HARPER: We’re looking at cases where poachers get 29 years and more because they are actually involved in an illegal hunt and not just possession of rhino horn. 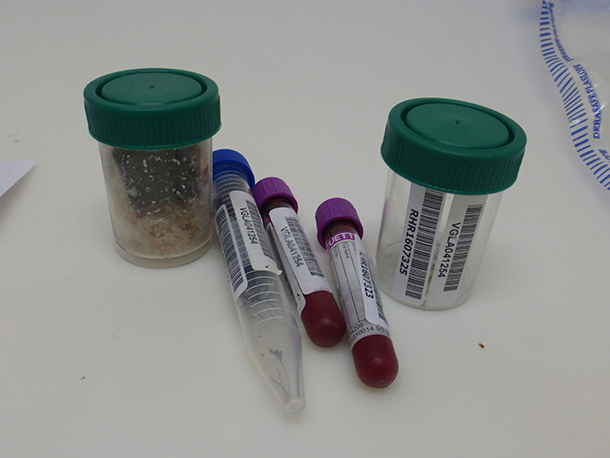 BASCOMB: The sentence for poaching can vary greatly depending on the country where the poacher was caught. Rhino poaching is a well-organized, highly profitable crime, run by a heavily armed international syndicate. Harper says her DNA database allows officers to keep tabs on how poachers are operating.

HARPER: If you look at it internationally that gives you some idea of the traceability of where that horn had moved from the carcass to its final destination and how quickly it moved.

BASCOMB: It’s connecting the dots like that, between crime scene, transit, and consumer, that Jorge Rios says is so critical. Rios is the chief of the global program to combat wildlife and forest crime at the UN office of drugs and crime. He says training prosecutors in the countries where rhino horns end up is the next step.

BASCOMB: The ultimate source of wildlife protection, the Convention on International Trade in Endangered Species, or CITES, recently met in South Africa. Rhinos have had the highest level of CITES protection since 1977 when trade was completely prohibited. This year the Kingdom of Swaziland petitioned to legalize the sale of humanely harvested horn. CITES delegates declined to pass the new rule, fearing that illegal horn from poached animals could be laundered in with the sustainably harvested horn. But Pelham Jones from the Private Rhino Owners Association says the rhino DNA database would make that impossible.

JONES: Because every horn, before it enters the trade market, has to go through the process of verification of its DNA etc. so in simplistic terms, if you’re not a chicken farmer you cannot be bringing chicken to the market. So, can illegal horn enter the market on the South African side? We say, no, it cannot because of the traceability via DNA.

BASCOMB: DNA technology is also being used to create synthetic rhino horn. A biotech company in Seattle, Washington makes synthetic horn, which they hope to sell at a lower price than real horn and put poachers out of business. But Cindy Harper from the DNA lab says the synthetic horn is virtually indistinguishable from the real horn, so she believes it’s a bad idea.

HARPER: The company that’s currently really at the top of the drive is wanting to put DNA into synthetic horn, that is something I simply don’t understand. I don’t see any other synthetic product, such as synthetic fur or meat or anything else, having the actual animal’s DNA put into it. The only reason I can think for doing that is to make it impossible for law enforcement to differentiate that. 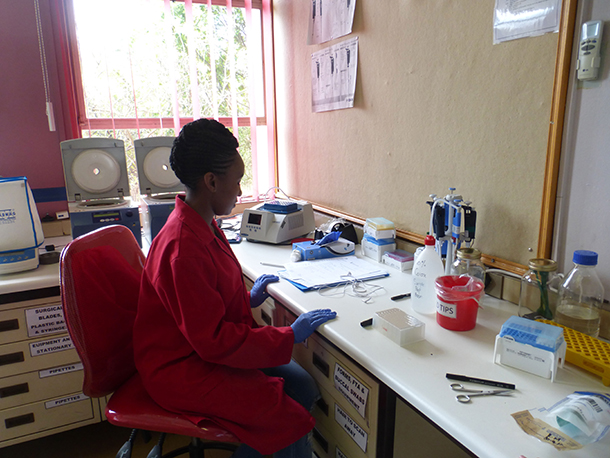 BASCOMB: Harper says, law enforcement agents already have their work cut out for them. She estimates that just one percent of seized rhino horn samples actually come back to her lab to get matched up on the database.

HARPER: That is the next step in the process. Making sure that we get these seized samples back and to be able to look at the whole movement of these horns globally. The criminals are organized. We need to make sure that everybody else who’s fighting those criminals are equally organized.

BASCOMB: Harper’s lab is working hard to register all of Africa’s rhinos, but there’s a long way to go, and it’s a race against time. More than 1,300 have already been killed so far this year.

White rhinos are considered Near Threatened on the IUCN Red List