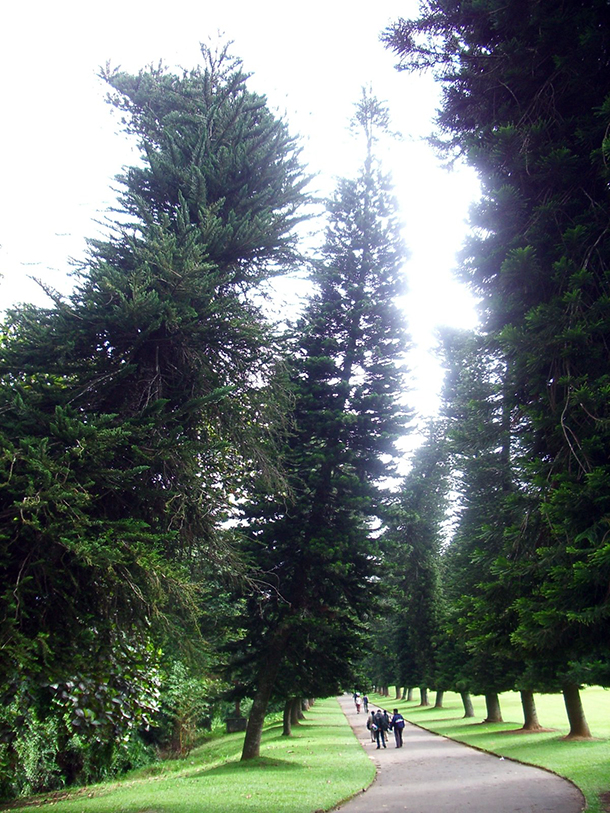 California scientists assumed that New Caledonia’s Cook Pine Tree, famous for its off-kilter tilt, routinely points south. But the research team’s global survey revealed that the tree actually always reaches for the Equator. As Lizz Malloy explains in this week’s note on emerging science, nobody quite knows the reason for this singular trend.

In a minute, some glories of mud. But first, this note on emerging science from Lizz Malloy.

MALLOY: All signs point south…or north depending on which side of the equator you, or rather your Cook Pine tree, resides.

Trees are often bent and gnarled by wind and weather over time, leaning this way and that, but the Cook pine leans with consistency. Once only found in New Caledonia, the Cook pine has traveled to many places around the world and is noted for the specific tilt in its trunk everywhere. But, until recently, nobody took much notice.

It turns out that the Cook Pine always leans towards the equator, a fact realized by a team at the California Polytechnic State University in San Luis Obispo, who were working on a book about urban trees in the Golden State.

Team leader, Matt Ritter, had thought that the tree only pointed south but after studying 256 Cook pines dispersed across the globe the researchers found that all of these trees point to the equator. They also noted that the further from the equator the trees are found the more extreme their tilt becomes. This growth pattern is not a completely unfamiliar trait in some smaller plants, but the Cook pine’s particular leaning habits are somewhat unprecedented among an entire species of tree.

While the reason behind the Cook pine’s equatorial slant remains unknown, researchers hope further study will help them solve this peculiar phenomenon.


Ecology Journal: Study on the lean of the Cook pine

Scientific American: “Roots Down, Shoots Up. But How Does a Plant Know Which is Which?