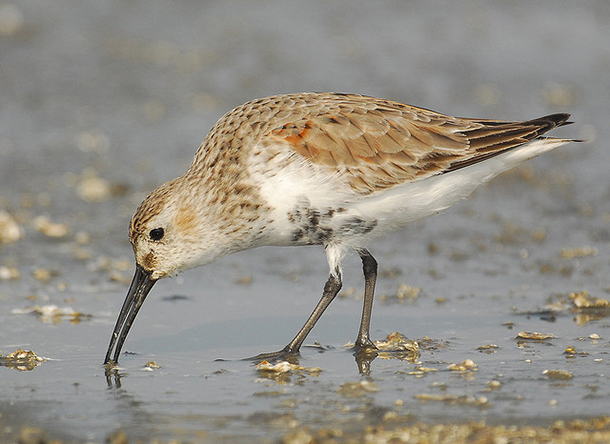 Michael Stein samples the sounds and smells of the mudflat in this week’s BirdNote®, encountering sandpipers, dunlins, clams, worms and a variety of powerful odors.

CURWOOD: As the water drains away on the Gulf coast, one reality residents will face is mud. But mud can have its uses, as Michael Stein explains in today’s BirdNote.

STEIN: Today we’re walking the shoreline of a saltwater bay. The tide’s going out, revealing a broad expanse of dark, glistening mudflat.

This muddy plain might appear a waste of natural space, a mere transient landscape awaiting the rising tide. And that low tide smell! On a hot day, it goes right by pungent, heading for malodorous! 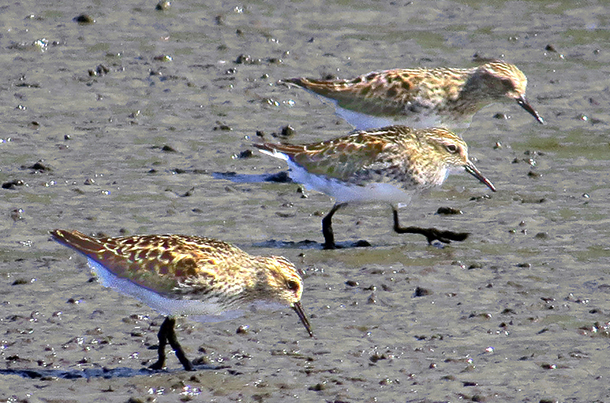 But that mudflat fragrance offers an important clue. Mudflats are rich in nutrients, such as decomposing organic matter and minerals. Mudflats, far from wastelands, support a bounty of life, such as foraging sandpipers called Dunlin.

Much of this life lies below the surface. Scoop up a pail of mud and you might find – in addition to a clam or two big enough to eat – vast quantities of tiny snails and clams, worms, crustaceans, larvae, and much more.

Mudflats also support a bounty of bird life. Millions of shorebirds follow shorelines and their mudflats each spring and fall, where they feast upon those tiny creatures hidden beneath the mud’s surface, a banquet that powers the birds’ continent-spanning migrations.

So the next time you wrinkle your nose at low tide, imagine the countless creatures that draw their lifeblood from that fragrant mudflat.

CURWOOD: For photos, ooze on over to our website, LOE.org.