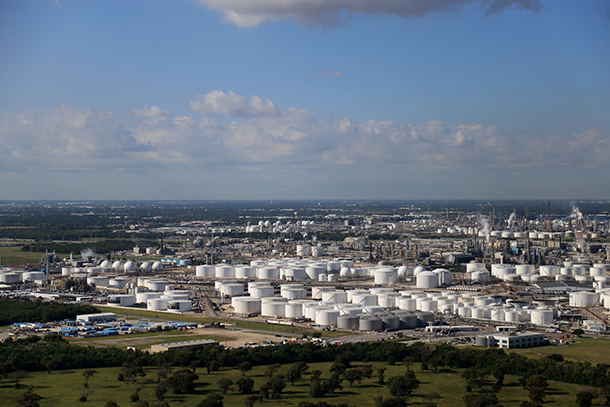 This year’s deadly hurricane season is running up a staggering tab in terms of lives lost or disrupted, homes damaged or destroyed, and major shocks to our economy, ranging from huge business and government losses down to spikes in gasoline prices. But there is another cost that is literally below the surface in many cases, and that is the toxic and infectious pollutants which the storms have released into the air as well as the water.

In the Houston-Beaumont-Port Arthur region of Texas, benzene, toluene, hydrochloric acid, and sulfur dioxide are just four of the dangerous compounds already known to have been released by the unprecedented flooding from Hurricane Harvey. The region is home to some 3,700 gas, oil, or petrochemical businesses, and over 40 superfund sites, and officials and activists are just beginning to assess the storm-related human health risks, among them the Sierra Club.

Cyrus Reed runs conservation efforts for Lone Star Sierra and he joins us now. Welcome to Living on Earth.

REED: Thank you so much. I'm glad to be here.

CURWOOD: What concerns you most about the industrial pollution so far in southeast Texas in the wake of Harvey?

CURWOOD: So, how soon will we know exactly how much chemical pollution is out there from this storm?

REED: Well, I don't know that we'll ever know exactly. So, both the TCEQ, Texas Commission on Environmental Quality, and the EPA frankly put in some temporary rules in place which gave some flexibility to the industries in the immediacy of Hurricane Harvey. So, a lot of these reports that are required under law to be reported are really being done on a voluntary basis. But what we have seen is more than two million pounds of different chemicals being released as part of either emergencies or emergency shutdowns by some of these refineries, but we've also seen spills when there have been accidents and big concern for the community is the Superfund sites, 13 of which were flooded. 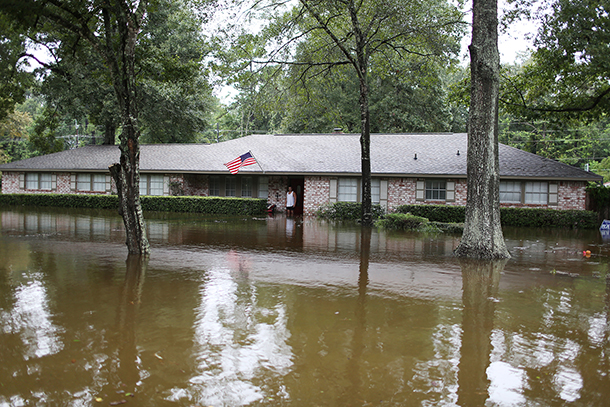 CURWOOD: Talk to me about the San Jacinto waste pits Superfund sites. What's in there? What's the risk to public health if the water dissolves or somehow releases those chemicals?

REED: Well, it has already been a problem at the site, right? These are old chemical sites, old chemicals that have been buried there. A lot of it is dioxin. Dioxin is a highly dangerous toxic. The EPA has already come up with an initial cleanup plan, but in the meantime they had only a temporary cap on some of this area, and there is a difference of opinion about whether that cap has been breached.

We have an organizer in Houston that's been to the site and says, “It's been breached.” There is the potential that contaminants have gotten out into the environment and frankly into neighborhoods in that area. EPA is continuing to say, “We're assessing it. We don't think there's any immediate danger.”

CURWOOD: Now, the explosion at the Arkema chemical plant is the most obvious example of an industrial site malfunctioning after Harvey, and actually being able to see what's going on. I mean you get a fire and explosion and big black smoke. What was in that smoke?

REED: Well, again I'm going to plead a little bit of ignorance because under the last administration there were some rules that were passed, some new rules, chemical safety rules known as risk management plans that companies, refineries and chemical plants, were supposed to be required to have that information on site and provide it in terms of emergency. One of the first things the Trump administration did a few months ago was delay that rule until 2019. So, literally we had police and sheriff's department responding to an accident where they didn't have a full list of the type of chemicals that were on-site and could be released. You know, the main one was a peroxide, a hydrogen peroxide, but there may have been other chemicals released that we don't know about.

CURWOOD: What's your understanding of why the event at the Arkema plant happened and what risk might still remain?

REED: It really has to do with the chemicals that they were storing on site need to be refrigerated. So, when the power went out those chemicals were highly volatile and reacted. And so, although they apparently had a backup power system, it also didn't function. They knew it was going to explode. They said, “People might want to evacuate a couple miles away from this facility because this thing is going to blow at one point.”

CURWOOD: So, you have people living near these Superfund sites that have been flooded along with some of the refineries and chemical facilities. What do those folks who live nearby...What are they noticing and with experiencing firsthand?

REED: I'm not there, but according to our organizers and people we've spoken to in that area, there is much confusion in the Houston area and north of there in Beaumont and Port Arthur, whether people should return to their homes or not, whether the testing has been done to make sure it's safe or not. Honestly, a lot of people are returning to their homes, even though the testing hasn't really been done.

Another explosion just occurred at #Arkema. This video was sent to me by a neighbor who lives 2.6 miles from the plant @BuzzFeedNews pic.twitter.com/BqXQHot1EG

And then you couple that with the fact that - not even talking about industrial and chemical plants - we also have a lot of, about a third of the wastewater treatment plants in the area did fail and had overflows. There may be a lot of high levels of fecal coliform, you know, poop that got out there and is still either in puddles or in the soil that people need to be careful about.

CURWOOD: As we're speaking, we're closely watching Hurricane Irma, and it seems that Harvey was a long time ago, but it wasn't so long ago we were looking at pictures of people wading through waist deep, even neck deep water. You're telling me that this water likely had, well, some poop along with some toxic chemicals along with, I mean, what were people exposed to? What's the health risk here?

REED: Well, according to the TCEQ, of the 1,200 wastewater treatment plants in that general area, 800 of them were working, which means about 400 weren't working, and we have almost 100 reports of wastewater overflows at some of those plants. Now, if people who waded through that then cleaned off, didn't put the same clothes back on, they probably should be OK, but there's going to be...You know, a lot of people obviously are cleaning out their house replacing the dry wall because a lot of it is likely very contaminated.

CURWOOD: How can Texas move forward now with a just recovery that doesn’t burden poor people and low income people of color in these areas, who already obviously are struggling in the wake of the storm, not having a whole lot of capital resources to begin with anyway?

REED: Well, I think one is, as I mentioned before, we really need to increase funding for the basic testing to make sure these areas are safe to go back to. So, that would be one step, and, in particular, that would be Superfund where we have a large amount of chemicals on site. But we also need to look at our rules and regulations. So, the Trump administration decided to delay these chemical safety rules. In the wake of this extreme climate that the whole country seems to be facing, we really need basic chemical safety rules in place, so that we know what the best practices are and what to do in an emergency and what chemicals are out there. That seems basic.

The other is, we have what's called the Railroad Commission of Texas, which does not regulate railroads. It regulates oil and gas; it's a historical name. But they're one of our most important state agencies, and yet their rules are very outdated. An example of this is they don't require sub-surface shutoff valves for oil and gas wells and for disposal wells in flood zones and in hurricane zones, and it seems like a basic thing is, we should have shut off valves so when there is a storm we can shut off those wells and make sure they don't leak.

We have waste sites here in Texas that take drill cutting and fluids from oil and gas production, and yet we only design them for a 24-hour rain event, which means any time you have more than 24 hours of rain, those things are going to flood and affect neighborhood and land, and that seems like something we have to change. And we have outdated spill response rules, what to do in a time of flood, how do oil and gas producers report? How do they clean it up? So, we've got a lot of regulatory work to do here as well as the EPA, but just here in Texas as well as increased funding, but there may be some neighborhoods where we need to relocate people. That's going to be expensive, but in some cases we're going to have to do it. 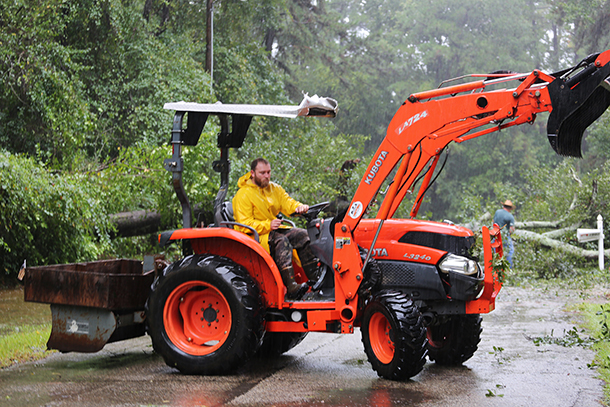 CURWOOD: With climate change, with global warming, we're seeing this change in the hydrologic cycle, the rain cycle, kind of like it swallowed steroids, and right now, as we're talking, we looking at the aftermath of Harvey, Irma is doing its thing. We're also seeing crazy fires out in California due to dryness. From your perspective, what needs to be done to protect the public in the aftermath of these things because all these events create, well, not exactly the healthiest conditions?

REED: You know, it's kind of like the 12-step program. First you've got to admit you've got a problem, and we need both political parties, not just one, to admit that climate change is real and, therefore, we need to be prepared for it. We need to try to mitigate it as best we can but also be resilient about it and design our cities and our institutions in a way to withstand these extreme events. The city of Houston should do that as well as they rebuild.

You know, a lot of cities out there that are more forward thinking have looked at green infrastructure. What's the way that you can use parks and green space to absorb floods or hurricanes? The hydrological cycle, yes, is changing but we also have more people and more concrete, which makes for flashier floods.

CURWOOD: Cyrus Reed is the Conservation Director of the Lone Star chapter of the Sierra Club. Thanks so much for taking the time today.

REED: I appreciate it. Thank you.

NYTimes: “Crisis Is Over at Texas Plant, but Chemical Safety Flaws Remain”