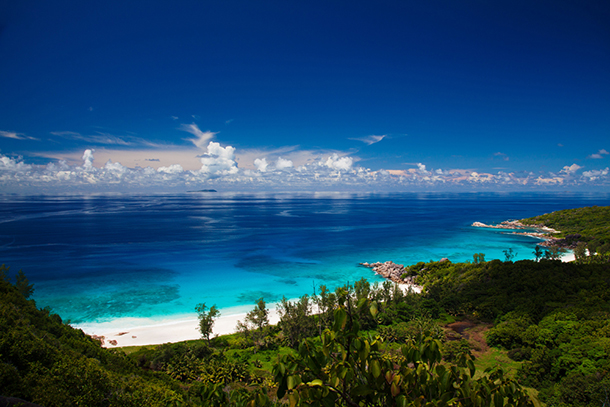 The government of the Seychelles, a 115-island archipelago in the Indian Ocean, is considering a proposal for what would be one of the world’s largest marine sanctuaries. (Photo: Jean-Marie Hullot, Flickr CC BY 2.0)

Amid the dismal news of destructive hurricanes and floods, Peter Dykstra and host Steve Curwood manage to find some positive environmental news beyond the headlines to discuss. This week, they look at proposed marine sanctuaries in the Indian and Pacific Oceans, and remember a remarkable example of environmental cooperation among nations. Less encouraging is news extreme weather events seem to do little to influence public opinion about global warming.

CURWOOD: Let’s take a trip to Georgia now to catch up with Peter Dykstra and what’s happening beyond the headlines. Peter’s with Environmental Health News, that’s ehn dot org and DailyClimate dot org and he’s on the line from Brookhaven. Hey there, Peter, what’s going on?

DYKSTRA: Hi Steve. In keeping with an all-too-rare tradition, let's try to get some good environmental news in here.

CURWOOD: Good news is always welcome, so fire away.

DYKSTRA: The Seychelles are a beautiful island archipelago in the Indian Ocean surrounded by some of the most unexploited ocean areas left in the world. And the Seychelles Government is now looking at a proposal for a huge marine reserve -- one of the world's biggest -- and one that would come on the heels of another announcement of the world's biggest marine sanctuary around Easter Island in the Pacific.

CURWOOD: So let's back up a minute Peter ... Marine reserves, marine sanctuaries, these are uh, well they’re kind of national parks of the oceans, right?

DYKSTRA: Correct, and protecting huge swaths of that ocean from commercial activity -- fishing, deep-sea mining, drilling, and a lot more -- is a big step toward preserving some sort of legacy. Just like Teddy Roosevelt and others did a century ago with protected land areas like Yellowstone and Yosemite, modern-day conservationists view themselves as protecting oceanic national parks in the same way.

CURWOOD: Peter, not to wash a wave over your campfire, but aren't these marine sanctuaries on the high seas hard to police? I mean their areas are as big as the state of Texas, and they’ve got one boat, maybe two patrol boats to guard them? 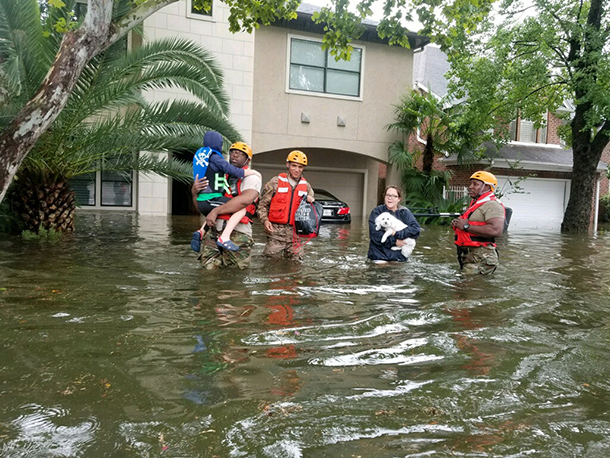 While the aftermath of hurricanes continue to affect residents, such as those in Houston, Texas devastated by Hurricane Harvey (above), research has found that the frequency and intensity of these latest storms have done little to shift public opinion about their connection with global warming. (Photo: Texas Military Department, Flickr CC BY-ND 2.0)

DYKSTRA: Well that’s a valid point, policing is a major concern, but it's at least getting a little easier to patrol them. The same kind of satellite technology that allows other nations to monitor things like North Korean nuclear activity allows us to follow illegal fishing boats into protected water. The tiny Pacific island nation of Palau has already seized a couple of boats in this manner for illegal fishing in its marine sanctuary.

A specific about this latest deal -- the Seychelles swung a huge arrangement with the nonprofit Nature Conservancy, which will pick up millions of the tiny nation's international debt in exchange for limiting tuna fishing and other commercial activity in its waters.

CURWOOD: Hmm, a debt-for-tuna swap. Of course, back home here, Interior Secretary Zinke would like to see more fishing in some US Marine Monuments. Hey Peter, what's your next topic this week?

DYKSTRA: This one’s from academics at the Indiana University and the National University of Australia. They say that even after scientists tell us that storms, and droughts and floods are very likely made more frequent and intense by climate change, a season of such catastrophic storms hasn’t done much to change public opinion.

CURWOOD: So you’re telling me that Harvey, Irma, Maria, these killer Atlantic hurricanes, won't move the needle much?

DYKSTRA: Surprisingly little, and only for a short period of time, according to this research which was published this month in the Journal of Environmental Change. The huge damage that’s been done in Texas, and Florida and the Caribbean, climate advocates have had little success pressing their arguments that even these mega-storms should move hearts and minds the way they moved coastlines.

CURWOOD: Alright, well let's move on now to the land of learning from past mistakes, our weekly voyage through the history files.

DYKSTRA: Sometimes we do learn from history, and this one can hopefully be one of those times -- specifically that time when Ronald Reagan and Margaret Thatcher joined other world leaders in an environmental breakthrough that's bearing fruit today. 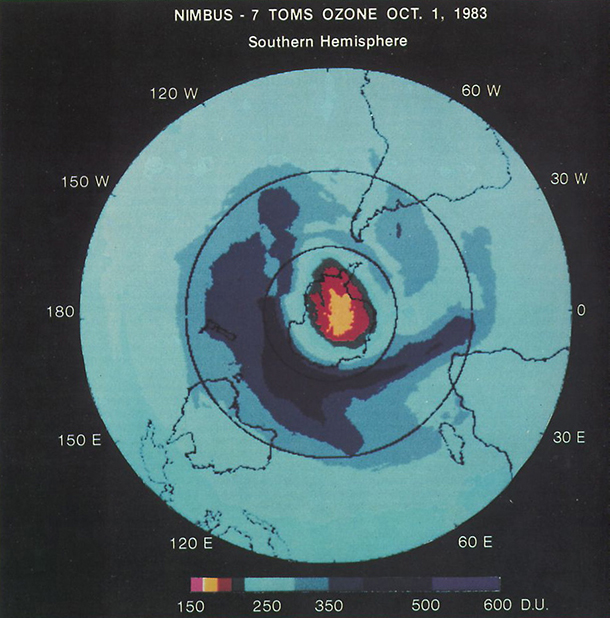 This image of the ozone hole above the Antarctic, taken in 1985, helped lead to the Montreal Protocol. In 1987, the U.S. and the U.K signed on to this historic agreement to limit emissions of ozone-destroying chemicals like chlorofluorocarbons. (Photo: NASA Goddard Space Flight Center, Flickr CC BY 2.0)

Thirty years ago, 25 nations including Reagan's United States and Thatcher's United Kingdom, signed on to the Montreal Protocol, the global effort that came together to close the growing ozone holes over the Arctic and the Antarctic.

CURWOOD: Those holes threatened to expose humans and wildlife to the harmful UV radiation normally kept out by the earth's protective layer of stratospheric ozone.

DYKSTRA: Yeah, the treaty’s worked to phase out ozone-destroying chemicals like chloroflurocarbons from the earth's upper atmosphere, resulting in projections that our ozone holes will some day heal themselves, and in fact, they've already begun to do so.

DYKSTRA: Alright Steve, thanks a lot. We’ll talk to you soon.


The Economist: “A new plan to protect the water around the Seychelles”

The Revelator: “After 30 years, the Montreal Protocol is paying ozone dividends”