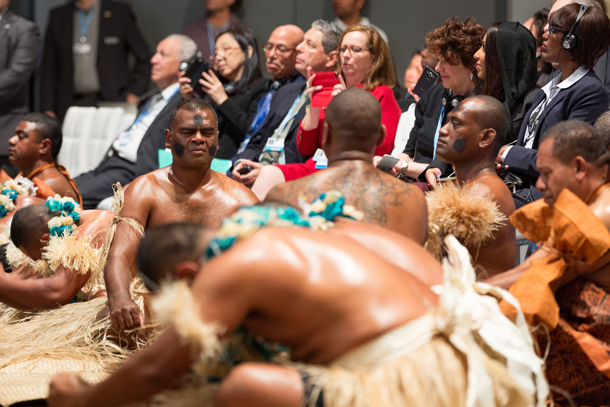 A Fijian traditional welcome ceremony kicked off COP23, which is being presided over by the Government of Fiji. (Photo: UNclimatechange, Flickr CC BY-NC-SA 2.0)

As delegates thrashed out details on how to count emissions cuts accurately, and map the next steps forward, America’s Pledge made a big splash in Bonn at the 23rd Climate Conference of the Parties, COP 23. Host Steve Curwood catches up with Alden Meyer of the Union of Concerned Scientists, who says that financing continues to cause friction between donor countries and developing nations.

CURWOOD: Even though the US is largely standing aside from the Paris Climate Agreement for now, the rest of world made implementing Paris the primary work of COP23 in Bonn. And with us now to help navigate what’s been done and what lies ahead is Alden Meyer of the Union of Concerned Scientists.

Hi, Alden. Welcome back to Living on Earth.

MEYER: Thanks, Steve, good to be with you again.

CURWOOD: Hey, Alden. Great to have you here. I understand that there was A US Climate Action Center that attracted a lot of attention.

MEYER: Yeah, it did. This was put together by the "We Are Still In" coalition of mayors and governors and business leaders, university presidents and others that wanted to demonstrate to the world that, despite the actions of President Trump announcing he's going to withdraw the US from the Paris Agreement, that major elements of US society remain committed to achieving our goals under Paris. They're taking action to drive the clean energy revolution forward, to de-carbonize their business sectors, to make sure that we have a shot at meeting the commitments that President Obama made under Paris. And they really made quite a splash here, and I think they really got the word out that Donald Trump does not speak for the real United States.

CURWOOD: So, Alden, what were the big takeaways from this year's UN climate Conference of the Parties, COP23? 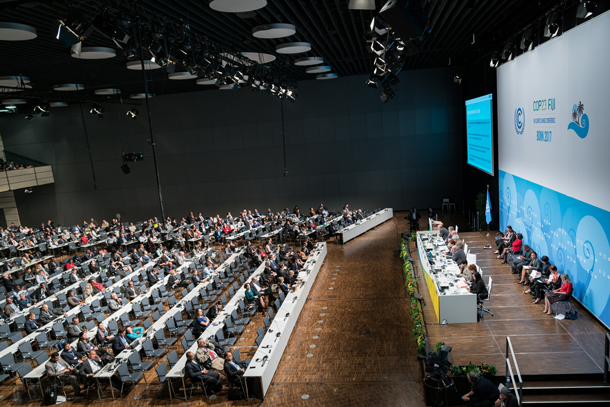 Negotiators from all around the world spent two weeks ironing out details in the implementation of the Paris Agreement at the 23rd Conference of the Parties (COP23) in Bonn, Germany in November 2017. (Photo: UNclimatechange, Flickr CC BY-NC-SA 2.0)

MEYER: Well, this was kind of an in-between COP, in-between Paris, and the meeting in Poland next year. They had to lay the groundwork for a discussion of collective adequacy of ambition against the Paris temperature targets. We already know that countries aren't doing enough collectively to come anywhere close to meeting the temperature limitation goals in Paris. United Nations Environment Program put out a report on that the week before the COP, showing that, if we stay on the current commitments, we would only get one-third of the way to where we need to be by 2030 to have a fighting chance to stay well below two degrees Celsius temperature increase. So, that's job one, is to lay the groundwork for this discussion next year in Poland about how we will raise our game, try to close that gap.

Another thing, of course, they focused on here is the implementation rules for Paris itself, things like accounting for land use emissions, market mechanisms, emissions trading, transparency in reporting of national efforts to constrain their emissions, which of course has been a primary goal for the United States under both Republican and Democratic administrations for the last decade or so. And then of course the perennial issue of finance, which is actually what's the only remaining issue as we speak pending right now. There's a big fight going on about how developed countries will be more transparent about how they intend to meet the hundred billion dollar by 2020 per year commitment they made in Copenhagen to help developing countries de-carbonize their development paths and also cope with the mounting impacts of climate change.

CURWOOD: Alden, there's been a lot of concern about loss and damage and here's a year we saw tremendous flooding in the developing part of the world. How are these negotiations addressing concerns by developing countries about how to handle loss and damage?

MEYER: Well, it's been very frustrating for the vulnerable countries here because there is a program that was launched in Warsaw in 2013, the so-called Warsaw International Mechanism for Loss and Damage, which has been looking at this issue. How do you use insurance? How to use government funding to try to help countries that are facing these, these sudden impacts? And they continue to do the technical work, but the developed countries including the United States have been blocking any political space where they can start to discuss how they start to ramp up substantial amounts of funding.

???? Activists at the U.N. climate talks have unfurled a banner—"Keep it in the ground"—ahead of German Chancellor Angela Merkel's address to #COP23, urging her to phase out coal immediately pic.twitter.com/sXiohm3upi

CURWOOD: In other words it's like the Cuba Gooding character in Jerry Maguire. “Show me the money?”

MEYER: Show me the money. Show me how you're going to help me deal with resettlement of refugees from islands, how you're going to deal with economies like Fiji, which is the presidency of this COP. They suffered tremendous damage a few years ago from Typhoon Winston, wiped out about one-third of their economy. They’re just recovering from that, and, of course, just recently we saw devastating hurricanes for Barbuda, Puerto Rico, other islands in the Caribbean. So, this is a growing issue. It's an issue of urgency for these countries. But so far the US, Europe, Japan, other developed countries haven't been willing to open up a conversation about how you meet those needs long term.

CURWOOD: And at this meeting, I think there's a bit of bad news, isn't it? That global greenhouse gas emissions are on the rise after being relatively flat over the past two or three years?

MEYER: Yeah, that that information just came out during, during the Conference of the Parties here. We have been relatively flat the last two or three years. It looks like preliminary figures for 2017…So, there could be as much as a two, or two-and-a half percent increase and in carbon emissions driven largely by China with some other countries coming in. So, of course, if that was the beginning of a trend that would be quite worrisome, but it just shows, I think, that despite the celebration over Paris, this is by no means in the bank. There's hard work that needs to be done in all countries, and the fact that coal plants continue to get financed in Vietnam and Indonesia and India and other places just shows that we haven't turned the corner yet.

CURWOOD: Explain for people who may not know the UN climate negotiation process intimately, as you do, how non-state actors get involved in this?

MEYER: Well, non-state actors include businesses, non-governmental organizations like UCS [Union of Concerned Scientists], indigenous groups, labor union, youth groups, research institutions. There's a whole infrastructure of different constituencies in this UN process, and they play a vital role both trying to influence the negotiations and the positions that countries take, talking to the media and to the public about what's going on here, but also in the wake of Paris playing a critical role in implementation of the agreements because if you think about it, the states, the cities, the business community, the research institutions, the development group, they really are where the rubber meets the road and in terms of implementation and reducing emissions. In this dialogue, that's going to be held in Poland next year, the presidency, the Fiji presidency has made a lot of space for engagement of these non-state actors in the process, realizing that we have a lot to bring to the table and that we're essential to implementation of any commitments that countries make.

CURWOOD: Massachusetts Democratic Senator Ed Markey at the Americas Pledge session kind of cracked a joke saying that COP stands for Climate Outlasts Presidents. To what extent are folks there feeling that Mr. Trump's approach is but a blip in the US approach to this? 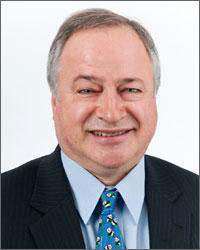 MEYER: Well, I think people were given a lot of comfort by the highly visible presence here of senators and governors, mayors, business leaders from the US. You're seeing a joint effort by China, the European Union and Canada through this process they launched in September called the Ministerial on Climate Action or MOCA. It kind of replaces the major economies forum that the Obama administration was spearheading over the last eight years. This is a space where ministers come together periodically to assess progress, to talk about how they can do more. There's going to be the next meeting of this group in the spring in Europe, and then China will host a meeting in the fall next year. That's one place where leadership will be coming from.

People aren't waiting for the Trump administration. They, they plan to take action on their own. They're talking about work on electric vehicles, on renewable energy. Just today you had 21 countries and states announce that they were committed to phasing out use of coal in the relatively near future. I think they hope by Poland next year to build that up to 50. So, there's all kinds of initiatives going on without the United States in the picture.

The real test I think will come over these next three years out to 2020 when countries have to make decisions about whether they're going to strengthen their commitments and if so by how much. That's when we'll see the acid test of whether the US pulling back has, has really made an impact on the willingness of other countries to move forward.

CURWOOD: Alden Meyer is, the Director of Strategy and Policy for the Union of Concerned Scientists. Alden, thanks so much for taking the time with us today.

MEYER: It was great to be with you, Steve.