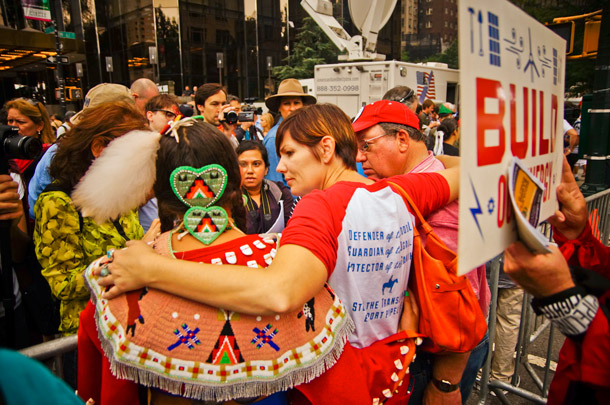 One of President Trump’s first actions was to reverse his predecessor’s rejection of the Keystone XL pipeline project to carry carbon-heavy tar-sands crude from Canada to Texas. The final official step to realizing the project was a Nebraska Commission’s approval of the pipeline route, which it’s now given. But the route is not the one the company preferred. As Living on Earth’s Jaime Kaiser explains, this gives pipeline opponents hope and possible cause to continue their fight, and may help put the economic feasibility of the project in jeopardy.

CURWOOD: From PRI, and the Jennifer and Ted Stanley Studios at the University of Massachusetts, Boston, this is Living on Earth. I’m Steve Curwood.

The long delayed Keystone XL pipeline project has cleared one of its final hurdles, thanks to the Nebraska Public Service Commission. Concerns over global warming ignited years of conflict over this proposal to pipe carbon-heavy crude over a thousand miles from the tar sands of Canada to a junction in southern Nebraska. And from there a pipeline to refineries in Texas has already been finished.

Environmental activists and landowners have fought against Keystone XL for years, and the recent regulatory ruling in Nebraska has both sides claiming victory. Living on Earth’s Jaime Kaiser has our story.

KAISER: In a 3 to 2 vote, the Nebraska Public Service Commission did approve Keystone XL, but not the route pipeline company TransCanada preferred. Instead, they’ve signed off on the “Mainline Alternative Route,” as they’re calling it, which would take a detour that avoids some the more vulnerable areas of the Ogallala Aquifer and the Nebraska Sandhills. Some of commissioners offered written statements defending their position, but only Commissioner Chrystal Rhoades spoke at the meeting itself.

RHOADES: The applicant provided insufficient evidence to substantiate any positive economic impact for Nebraska from this project. There was no evidence provided that any of the jobs created by the construction of this project would be given to Nebraska residents.

KAISER: Their decision came just days after 210,000 gallons of crude oil spilled from the original Keystone Pipeline, also owned by TransCanada. The Keystone XL fight is nothing new. There’s been fierce controversy over its construction since the project was proposed in 2008, especially regarding the environmental impact of the Canadian tar sands oil it would carry. When former President Obama rejected TransCanada’s request to build on US soil in 2015, it seemed like the project had been shuttered once and for all. So environmental activists were horrified when President Donald Trump seemed to bring it back from the dead with the stroke of a pen. 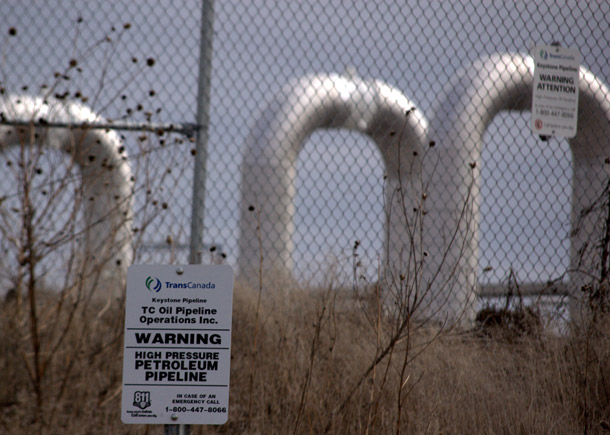 The first phase of the Keystone Pipeline system recently leaked over 210,000 gallons of crude oil in South Dakota – a state that neighbors Nebraska. (Photo: shannonpatrick17, Flickr CC BY 2.0)

TRUMP: Today I’m pleased to announce the official approval of the presidential permit for the Keystone XL pipeline.

TRUMP: When completed, the Keystone XL pipeline will span 900 miles. Wow. And have the capacity to deliver more than 800,000 barrels of oil per day to the gulf coast oil refinery. That’s some big pipeline. The fact is this that this 8 billion dollar investment in American energy was delayed for so long, it demonstrates how our government has too often failed its citizens and companies over the past long period of time.

KAISER: But in Nebraska, a coalition of farmers, Native Americans, and activists say, even a permit from the president himself doesn’t guarantee the project will pass through their state.

KLEEB: This decision today throws the entire project into a huge legal question mark.
KAISER: That’s Jane Kleeb, the founder of Bold Nebraska, a social action group committed to halting construction of the pipeline. She explained at a post-decision rally that there are avenues for appeal.

KLEEB: The pipeline route that is now on the table in the state of Nebraska has never been reviewed by the feds. And so while I deeply appreciate the fact that TransCanada did not get their preferred route, it also opened up a huge victory for us in order to fight this now on the federal level.

KAISER: Even among pipeline opponents, emotions were mixed. The decision keeps some landowners out of the pipeline’s path, but not all of them.

TANDERUP: My name is Art Tanderup. Helen and I are landowners on the route. We’re disappointed today. Sorry, um, you know, we’ve got this foreign corporation coming in and stealing our land. We know it’s not over. We’re going to fight until the end, but how can our government give a foreign corporation the right to come in and take land from their citizens.

KAISER: Ponca Tribal Chairman Larry Wright, Jr. also spoke at the rally, where he drew parallels to another pipeline controversy.

WRIGHT: A year ago, water protectors were in Standing Rock being shot with water cannons, being gassed. Unarmed people were being attacked.

KAISER: Of course, he’s referring to the stand-off in North Dakota over the Dakota Access Pipeline, which is not a TransCanada project. But then he turned his attention to the recent Keystone Pipeline spill in South Dakota.

WRIGHT: And here, almost a year to the day later, we have a 210,000 gallon spill along the first route. That’s what could happen right here. 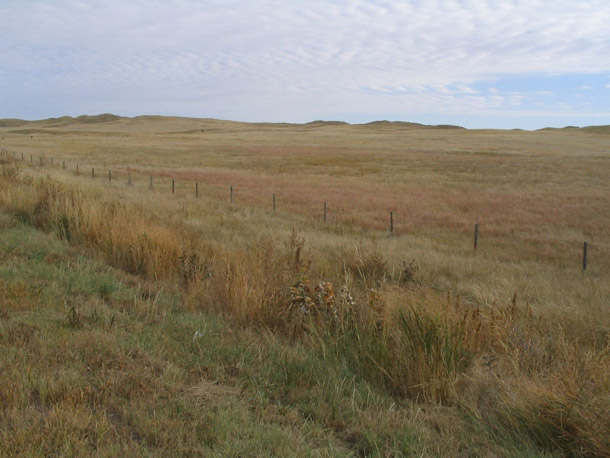 The Sandhills of Nebraska is a mixed-grass prairie ecosystem that sits atop the Ogallala Aquifer, and is a key stopover for the Great Sandhill Crane Migration. (Photo: Ken Lund, Flickr CC BY-SA 2.0)

KAISER: The Nebraska Commission didn’t account for that spill, or any spill. According to state law, they weren’t allowed to even consider safety concerns. Apparently, they were only meant to consider whether the pipeline was in the state’s public interest. But Rod Johnson, one of the commissioners who approved the project, addressed safety in his written defense anyway.

He wrote, “Safety was the number one issue raised at the Commission's four public meetings and in the many thousands of written comments we received during this process. TransCanada and project advocates have often said that the Keystone XL pipeline will be the safest in history. Nebraskans are counting on that promise, too.”

TransCanada President Russ Girling said, “We will conduct a careful review of the Public Service Commission's ruling while assessing how the decision would impact the cost and schedule of the project.” The Company is expected to decide before the year is out whether they’ll move forward with Keystone XL, or not.

The Washington Post: “Keystone pipeline spills 210,000 gallons of oil on eve of permitting decision for TransCanada”