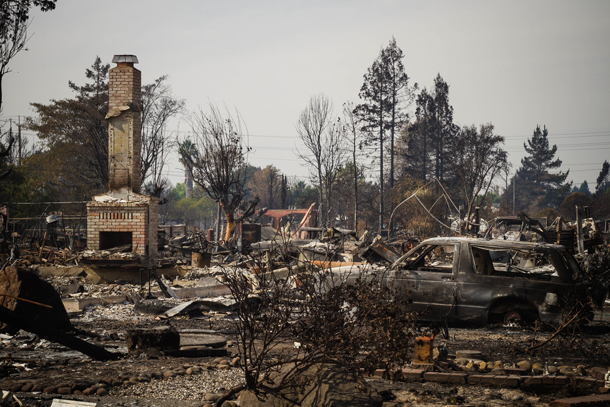 The wildfires that ripped through California neighborhoods in October 2017 and left them destroyed were just one of many natural disasters this year that spurred nearly one and a half percent of the U.S. population to register for Federal disaster aid. (Photo: California National Guard, Flickr CC BY 2.0)

This week in Beyond the Headlines, Peter Dykstra and host Steve Curwood discuss the rapid rise in people registering for federal disaster aid after this year’s record-breaking hurricanes, wild fires and floods. Then they note how the Pope regards climate denial, and remember an infamous environmental computer hack.

CURWOOD: Off to Atlanta, Georgia now to check in with Peter Dykstra and what stories beyond the headlines caught his fancy. Peter’s with Environmental Health News. That’s EHN.org and DailyClimate.org, and he’s on the line now. Hi there, Peter.

Here’s a notable statistic for you. The number of Americans filing for Federal disaster aid increased by nearly a factor of ten this year. Four point seven million Americans - one and a half percent of the US population - registered with FEMA so far in 2017 in a year of tragedies, including three major hurricanes, huge wildfires in California and elsewhere, massive flooding, and more.

CURWOOD: Wow, that's the headcount, but what about the money total?

DYKSTRA: Well, they haven't tallied that up yet, but it's sure to be well up into the tens of billions. And that's not counting the thousands of extra hires FEMA has brought on to process claims and help fix the damage done. FEMA’s also dealing with fighting fraudulent claims and hackers diverting some legitimate disaster payouts.

CURWOOD: So how big a problem is that?

DYKSTRA: I haven’t seen any data, but I guess it happens every time there’s a lot of government cash available. 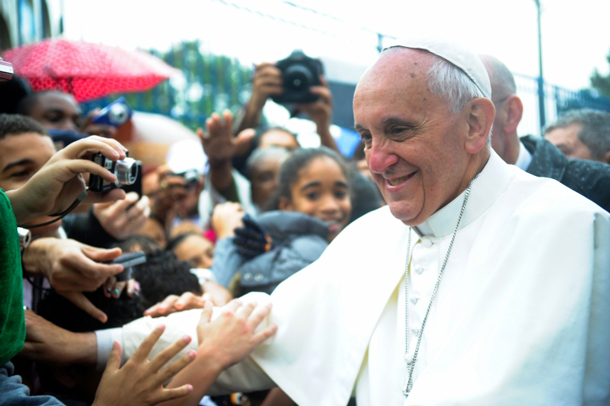 CURWOOD: I guess. And with that, time now to switch topics.

DYKSTRA: Ok, Steve. You want to know what the head of the Catholic Church thinks is "corrupt"?

DYKSTRA: It’s climate denial. Last week Pope Francis sent a message to the UN climate talks in Bonn. The Pontiff called climate change, “one of the worst phenomena that our humanity is witnessing.” He denounced what he called four "perverse attitudes" on climate. "Negation, indifference, resignation, and trust in inadequate solutions."

CURWOOD: Now didn't a band of deniers stage a pilgrimage to the Vatican to "educate" the Pope a couple of years ago?

DYKSTRA: They did, when the Papal Encyclical on the environment came out in 2015.

CURWOOD: Oh, yeah, his call on humanity to protect and be good stewards of Earth called “Laudato Si.” I take it that the Pope didn't grant them an audience, though.

DYKSTRA: Yeah not only that, their press conference didn't even draw an audience either, and they kind of came off looking like un-wise men bearing grifts.

CURWOOD: [LAUGHS] Hey what piece of environmental history do you have for us this week?

DYKSTRA: We mentioned computer hacks earlier, so let's talk about the most infamous environmental computer hack in history.

CURWOOD: I'm guessing that would be the theft of thousands of climate scientists' emails that subsequently acquired the nickname “Climate-gate.”

DYKSTRA: Right you are. This week in 2009, it was revealed that about 10,000 emails between climatologists at the University of East Anglia and their colleagues around the world had been stolen. Those emails conveniently found their way into the hands of groups opposed to taking action on climate, who highlighted a few poorly-worded and dumbly-expressed exchanges between the scientists to spin the whole calculation on rising global temperatures as a giant hoax.

CURWOOD: And I recall that, even more conveniently, this all came out just on the eve of a major climate summit in Copenhagen.

DYKSTRA: Yes, and it worked out much better for climate deniers than did their pilgrimage to Rome years later. Multiple investigations cleared the climate scientists. 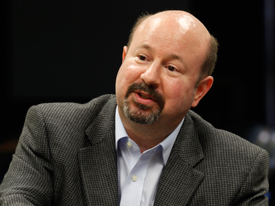 After the computer hack of thousands of climate scientists’ emails in 2009, climate scientist Michael Mann wrote a book on the event called The Hockey Stick and Climate Wars. (Photo: NASA/Dave Bowman)

CURWOOD: Yeah, one of them, Michael Mann, wrote a powerful book called “The Hockey Stick and the Climate Wars”. That book explained the whole evidence in detail.

DYKSTRA: That’s right, and then police investigations pointed inconclusively to Russian hackers, but you know, Steve, the notion that climate scientists were fraudsters hell-bent on money and power was cemented among those who desperately wanted to believe just that. It’s still there and they still trot the fiction out.

DYKSTRA: OK, Steve, thanks a lot. Talk to you next time.