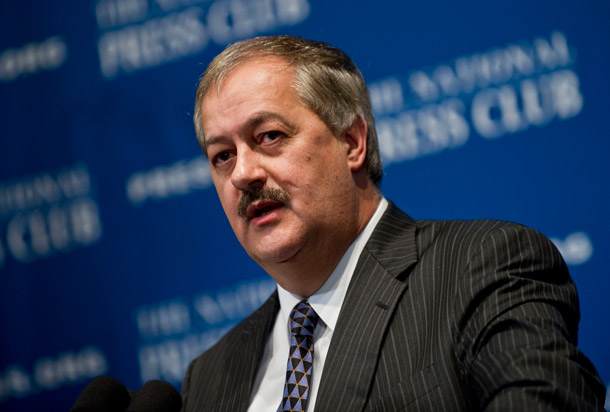 U.S. Senate hopeful Don Blankenship is a former CEO of the Massey Energy Company and was convicted of a felony for his actions related to the deaths of 29 miners in 2010. (Photo: Rainforest Action Network, Flickr CC BY-NC 2.0)

This week in Beyond the Headlines, Peter Dykstra and host Steve Curwood discuss a convicted felon’s campaign for the U.S. Senate and an Obama-era EPA coal cleanup rule that’s bitten the dust. For the history lesson, the duo recalls the Kyoto Protocol, one of the first international efforts to limit greenhouse gas emissions.

DYKSTRA: Hi Steve. You know, most Americans would agree that politics is a dirty business. But so too is a felony, so maybe it's appropriate that Don Blankenship, the coal baron who just got sprung from a year in Federal prison for his role in the 2010 Upper Big Branch mine disaster where 29 miners died, has decided to run for the U.S. Senate.

CURWOOD: Wait a minute, you can be convicted of a felony and still run for the Senate?

DYKSTRA: Apparently so. Federal law just requires you to be at least 30 years old, a U.S. citizen, and a legal resident of the state where you're running.

CURWOOD: But being legally eligible to run for office may not mean you're, well, electable.

DYKSTRA: Yeah, going to prison for running an unsafe mine leading to the deaths of 29 coal miners is not exactly a ticket to popularity among West Virginia voters. A statewide poll recently put Blankenship at a 10 percent approval rating.

CURWOOD: Wow, even below Congress, which has had some really low ratings in recent years.

DYKSTRA: Well, maybe Mr. Blankenship has that lack of self-awareness that seems to be all the rage in American politics lately, since he's bought and placed political ads all across the state. He'd join an already-crowded Republican field expected to include two sitting Congressmen and the state Attorney General in the May primary, with the winner likely facing the incumbent, pro-coal Democrat Joe Manchin. 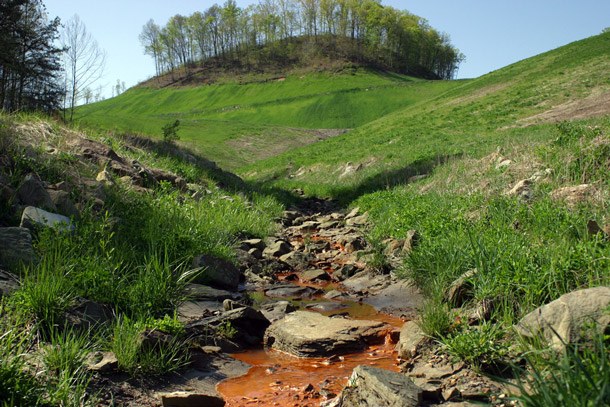 The EPA recently did away with an Obama-era rule which requires industry to prove they can financially cover the cleanup costs of closed mines. The pollution from abandoned mines often contaminates streams and rivers, as pictured above near a mountaintop removal site in Kentucky. (Photo: ilovemountains.org, Flickr CC BY 2.0)

DYKSTRA: Yeah, but he's way ahead on penitentiary experience. Two more little snags here. One is potentially that residency thing, since he seems to have moved out of West Virginia to Las Vegas, where he'll still be on probation on primary day, which means he’s ineligible to vote in the state of West Virginia.

CURWOOD: Well, people do like to root for an underdog.

DYKSTRA: Yeah, but there’s a difference between an underdog and a pariah. 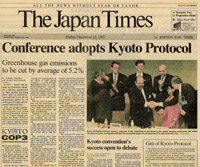 DYKSTRA: Well, speaking of mining, another Obama-era EPA rule appears to have bitten the dust. With thousands of abandoned mines leaving behind a toxic mess, Obama's EPA responded to a lawsuit by environmental groups by requiring mining companies to prove they could financially cover cleanup costs of closed mines. There’s a long history of companies just walking away from contaminated mining sites, and, since 2010, taxpayers have shelled out over a billion dollars for cleanups that mine owners just walked away from. So, before the hand-over brought in a decidedly different focus under President Trump, EPA wrote a midnight rule to try to hold those mine owners accountable.

CURWOOD: And those mines often send heavy metals and other pollutants into streams and rivers, right?

DYKSTRA: They do. But mining companies and the current EPA leadership argued, it's one more environmental rule that gets in the way of business.

CURWOOD: And so on to the business of environmental history. Hey, what's on the calendar this week?

DYKSTRA: Twenty years ago this week, in Kyoto, Japan, the world’s nations agreed to a climate pact to end all climate pacts. The Kyoto Accord was the first truly global effort to set limits on greenhouse gases. 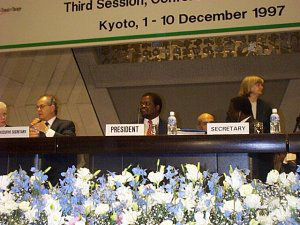 The official opening of COP 3 (the third Conference Of the Parties to the United Nations Framework Convention on Climate Change) in Kyoto, Japan, where the landmark Kyoto Accord would be agreed upon at that session. (Photo by IISD/ENB)

DYKSTRA: Yes, and the U.S. signed on to Kyoto but the agreement was largely neutralized by a unanimous senate resolutions that set impossible conditions on the treaty. The Clinton Administration never even bothered submitting Kyoto for formal approval. And that non-binding vote was sponsored by Nebraska Republican Senator Chuck Hagel, who later became Obama's defense Secretary, and the late Democratic Senate Leader, Robert Byrd, who for decades held the West Virginia seat, now eyed by Don Blankenship.

DYKSTRA: All right, Steve, thanks a lot. We’ll talk to you soon.

CURWOOD: And there’s more on these stories at our website, l-o-e dot org.