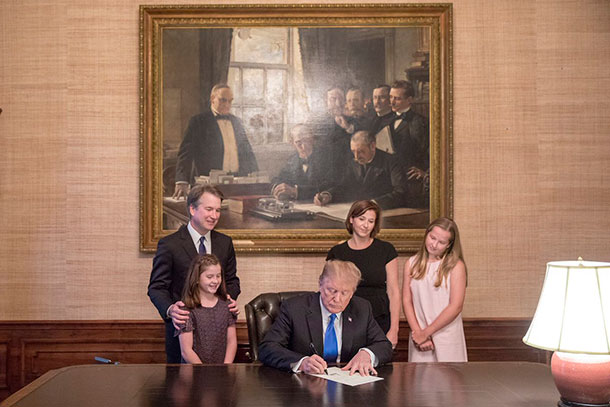 In a flourish of prime-time television, President Trump announced the nomination of Brett Kavanagh, a judge on the US Court of Appeals for the DC Circuit, to replace retiring Supreme Court Justice Anthony Kennedy.

While Justice Kennedy has a reputation as a moderate conservative who often tipped the balance in key cases, Judge Kavanaugh is seen as further to the right and could solidify conservative control of the high court for decades, should he be confirmed.

For a look at Judge Kavanaugh’s record on the environment, we turn to Vermont Law School Professor Pat Parenteau.

Welcome back to the program, Pat!

PARENTEAU: Thank you, Jaime. Good to be here.

KAISER: Of course, Judge Brett Kavanaugh moved to the forefront pretty quickly as a likely contender for the nomination. He was a front-runner, so this didn't come as a huge surprise to anybody, but what was your first reaction when you learned that President Trump had picked him? 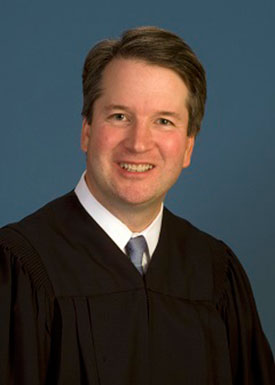 Judge Kavanaugh’s environmental decision record reflects a belief that environmental regulation should come about from more literal interpretation of the US Constitution and laws passed by Congress, compared to the discretion of regulators. (Photo: DC Court of Appeals, public domain)

PARENTEAU: Well, of the four finalists that we had heard the president had narrowed the list down to, I was not surprised that Kavanaugh would be a leading contender. But I have to say, from an environmental standpoint, based upon what I know about his track record of making decisions, he's probably the worst pick of the four. That may not be true of some other social issues, particularly things like Roe versus Wade that everybody's talking about. But when it comes to environmental law, the other three names on that list did not have much of a track record to begin with and might have been actually more open to seeing that environmental law oftentimes means regulation – oftentimes means federal regulation – and this is something that Brett Kavanaugh has been very skeptical about over his career.

KAISER: And so, why do you believe the president chose him?

PARENTEAU: Well, I mean the president asked for a list of eligible judges from the Federalist Society, and that's what he got. He got a list of 25 judges that the Federalist Society had hand-picked. He also consulted with the Heritage Foundation. These are obviously both very conservative, even right-wing, political entities in the country, and from there he winnowed it down to these four. So, I mean, this is a Supreme Court. Both Gorsuch and Kavanaugh, assuming he will be confirmed, which is probably inevitable – we will have a Supreme Court that has been tilted by, frankly, some very narrow special interests in the country.

KAISER: Although Brett Kavanaugh is relatively young, even Democrats wouldn't say that he's not experienced. I mean, he has a long-storied reputation in conservative legal circles. So, let's dig into some of the cases that he's heard about the environment and how they went. 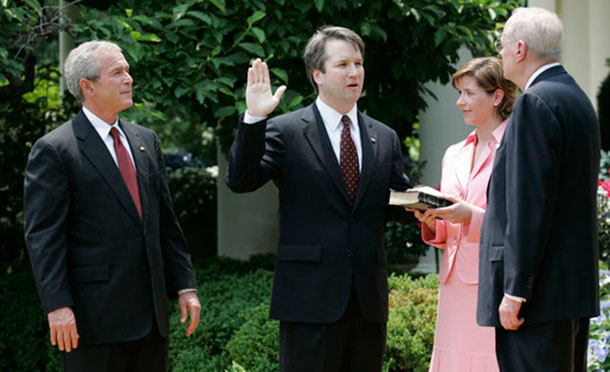 Brett Kavanaugh has been a Judge in the DC Circuit Court of Appeals since 2006. He was sworn in by Supreme Court Associate Justice Anthony Kennedy, for whom Judge Kavanaugh had previously clerked. (Photo: Official White House photo, public domain)

PARENTEAU: So, take the mercury rule, for an example. This is a very expensive rule in terms of what it would cost to meet the standards to protect public health. But Brett Kavanaugh, when the rule came to his court and his panel, immediately said, you need – EPA, you need to justify a rule like this with a lot more economic data than I see in this record. Now, ultimately, the mercury rule was actually upheld by the Supreme Court, but when Kavanaugh looked at the rule, he was not convinced that it should be upheld and wanted more economic justification. The same thing when it came to the Clean Power Plan. Of course, the DC Circuit heard arguments challenging the Obama Clean Power Plan, has never issued a decision, has been staying the effect of that case for the entire time that Trump's been in office. But, Kavanaugh during the oral argument was one of the few judges to express serious doubt about whether the courts should be involved in making policy on climate change.

KAISER: What can you say in terms of how he's been on cases dealing with endangered species or species protection?

PARENTEAU: Well, interesting you should ask that, Jamie, because the very first case on the docket of the Supreme Court in October is a case challenging protection of critical habitat for this little frog, the Dusky Gopher frog in Louisiana. The habitat in question is owned by the Weyerhaeuser company. Weyerhaeuser doesn't like the idea that the Endangered Species Act would apply to its property. So, if Kavanaugh is seated by October, which is Senator McConnell's goal, we'll find out right away what he thinks about the application of the Endangered Species Act to private property. That's going to be the telling point. Kavanaugh has shown a real concern for private property, a real concern for the costs of regulation on industry, and so this is a tailor-made case for him to say, I don't think the Endangered Species Act should be applied in this kind of a situation. And of course, when you think about it, the fate of most of the listed species – endangered species – depends on what happens on private land. After all, most of the land in the country is private. 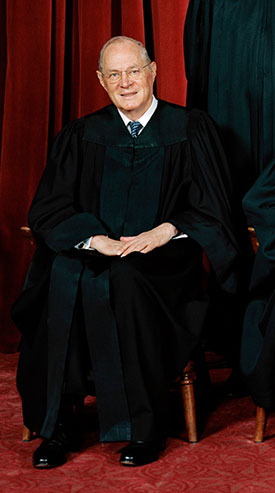 Associate Justice Anthony Kennedy announced his retirement from the Supreme Court in June of 2018. (Photo: US Supreme Court, public domain)

KAISER: To what extent does Kavanaugh acknowledge the reality of climate change, or to what extent has he shown the ability to consider climate science as evidence?

PARENTEAU: He has acknowledged the science behind climate change. Let me just say, Brett Kavanaugh is a brilliant lawyer and judge. That's what makes him in my mind a more formidable, if you will, adversary when it comes to extending environmental law. So, he doesn't question that climate change is real, that it's serious, that it demands attention. His point is, it's up to Congress to do it, not the courts. And my view is the courts do have a role in this process. He says courts are required to interpret the law, not make the law. That's a little disingenuous, frankly. When you look at the language of a statute, which is written very generally, often very ambiguous, subject to many different interpretations, the court is actually making a choice as to how to interpret the law. And by making that choice, they are making law. One message from this appointment is, we better redouble our efforts at the political level, and that means the electoral level, and that means November elections. We can't look to the courts. We certainly can't look to the Supreme Court at this point. We're going to have to change the Congress, elect people who are willing to look at the science and come up with creative approaches in a hurry, because we don't have a lot of time to address these problems. But the courts, I'm sorry to say, are a dead end.

KAISER: So, Pat, what are the chances that Brett Kavanaugh could end up becoming something of a David Souter? David Souter was appointed during the Reagan administration, was expected to be quite conservative, but really ended up being more moderate.

PARENTEAU: Well, that's a good comparison because David Souter was also a very – I would call him cerebral – intellectually curious about issues. So, you could say that the Supreme Court actually changed Justice Souter when he got there, and he began to grapple with some of these major issues, including actually some important environmental questions that came before the court when Souter was there. Kavanaugh is interesting in that I see the same kind of intellectual curiosity, and so there is certainly the possibility that Kavanaugh will change. And he may green up a little bit.

KAISER: Obviously, there's this vacancy because Justice Anthony Kennedy is retiring from the Supreme Court. Both Brett Kavanaugh and Gorsuch were actually clerks for Kennedy. How would you characterize Anthony Kennedy's legacy when it comes to the environment? 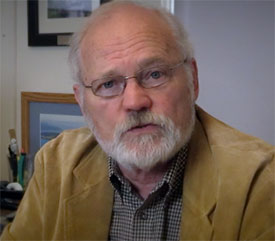 PARENTEAU: The thing about Kennedy was – and we can hope that Kavanaugh got some of this training from Kennedy – was Kennedy was a pragmatist. He was less an ideologue in sort of the most doctrinaire sense, and he was more of an incrementalist – which means Kennedy didn't like great big sweeping decisions other than, of course, marriage equality, which I think you can argue was a pretty sweeping decision. But in most of the environmental type cases where Kennedy was involved, he was looking at the issues from the standpoint of understanding the purpose of the statute. The best example I can give you is that Kennedy's concurring opinion in the infamous Rapanos case dealing with the Clean Water Act. And that opinion shows you that Kennedy was willing to engage with the science. He went into lots of the principles of ecology and how watersheds function and why it was important to protect streams and wetlands and so forth. He dug into the facts, and he wanted to be informed about why it was so complicated. You don't see many of the conservative justices like Scalia engaging in that.

KAISER: Now, what environment and public health cases are winding their way through the courts right now that could have a very different outcome with Kennedy gone and a conservative like Kavanaugh on the court?

PARENTEAU: Yeah, so the big one, of course, would be Massachusetts versus EPA where Kennedy was the critical fifth vote in favor of a ruling that EPA not only had the authority to regulate carbon pollution under the Clean Air Act, but it had the duty to do so once a determination had been made that carbon pollution threatens public health and welfare – which of course it does, there's no question about that. So, with Kennedy gone and with Kavanaugh replacing him, there's a very real risk that the Massachusetts versus EPA precedent, the most important single judicial decision we have on climate change, could be subject to either being overruled or greatly modified. And the way that will happen, even with Pruitt gone, his successor Wheeler is going to continue Pruitt's mission to adopt a Clean Power Plan that is so weak, it's almost laughable. And that plan, of course, will be challenged by many of the states and environmental groups that are pressing for stronger climate change regulations, and that will get to the Supreme Court. There's no question about it. It's a big enough issue. It will get there. And so Kavanaugh and Gorsuch are now in a position with the other conservatives on the court to rule in a way that basically could close the door to meaningful regulation of carbon pollution under the Clean Air Act.

KAISER: Pat Parenteau is a professor at Vermont Law School. Pat, thank you so much for coming on today.

PARENTEAU: Thanks for having me, Jaime.


The New York Times: “How Brett Kavanaugh Could Reshape Environmental Law From the Supreme Court”