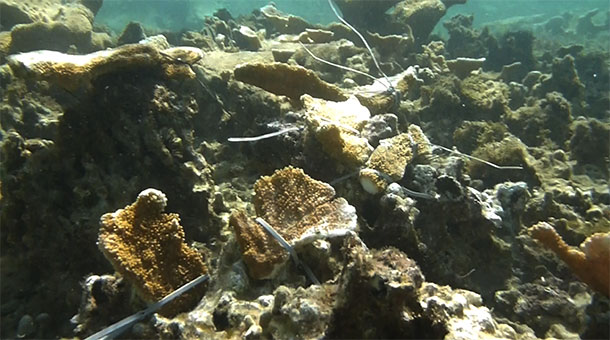 Roughly 10 percent of Puerto Rico’s corals were broken and damaged by Hurricane Maria in 2017. Corals are a first line of defense against storm surges and a critical habitat for juvenile fish but face an uphill battle against warming seas, ocean acidification and ship groundings. As Host Bobby Bascomb reports, Puerto Ricans are finding ways to give corals a fighting chance by reattaching healthy fragments.

In the tropics, coral reefs are a first line of defense against devastating storms like Hurricane Maria that pummeled Puerto Rico last year. The National Oceanic and Atmospheric Administration, NOAA, estimates that roughly 10 percent of Puerto Rico’s corals were damaged in the storm. Chunks of coral were broken off by rough seas and ocean swells. But on a recent trip to Puerto Rico, I discovered there’s still hope for thousands of battered bits of coral lying around the sea floor.

But interspersed among the usual colors of a tropical ocean are patches of brownish orange – elkhorn coral.

Salvador Loreano is a worker with the environmental NGO Grupo V.I.D.A.S. Their main task is coral restoration.

S. LOREANO: Our goal right now is to plant coral fragments here because you know that Maria, Hurricane Maria, came here and devastated the island. This caused great damage to the coral reef because the first time we went to there after Maria, the reef was like destroyed, like we see big coral colonies upside down and a lot of dead coral. 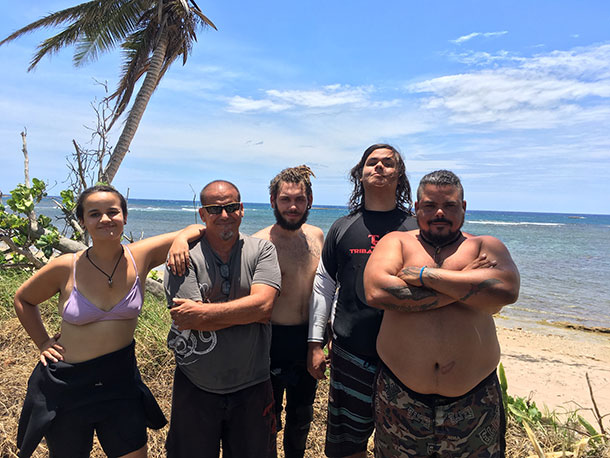 If a piece of coral is at least 2 inches long and 80 percent healthy, it can actually be reattached to an existing reef.

Salvador points towards the water… 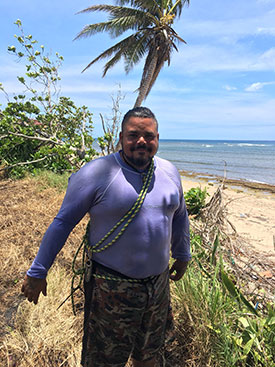 BASCOMB: She’s wearing a rash guard to protect from the hot tropical sun.

A mask is perched on her forehead, a snorkel dangling off it.

She’s holding a white milk crate with all the tools the crew will need for their morning’s work. 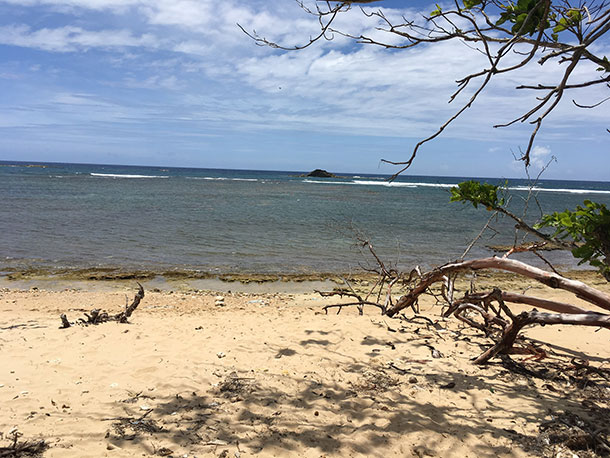 [SFX – WATER SPLASHING, WALKING IN THE WATER UNDER NEXT GRAPH]

Once the water is knee-deep, we splash in and swim about 500 feet to the reef.

They’re all juvenile fish, and the reef is a critical habitat for them.

Bulbous brain coral dot the sea floor, and orange elkhorn coral stick out at awkward angels, much like its namesake.

A worker named Ernesto is already hard at work. 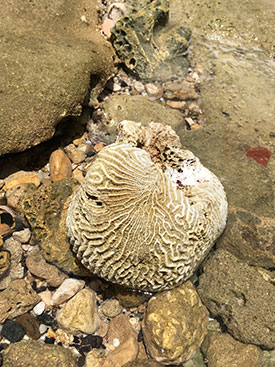 A piece of dead brain coral washed up on the beach. (Photo: Bobby Bascomb)

He uses pliers with a florescent pink handle to pull the zip tie tight and cut off the excess plastic, which he sticks in his other sleeve. This piece of coral is now one of hundreds just like it pinned to the reef with zip ties. And in two to three weeks, it will grow onto the reef enough to stay put on its own.

E. VÉLEZ GANDÍA: Yeah, those… they look like zombies, right there.

VÉLEZ GANDÍA: Yeahh, it’s like Day of the Dead but under the water.

BASCOMB: There is a very large dead coral at the entrance to the reef in the shallowest, warmest water.

Ernesto believes that one died not from algae blooms but from stress of a warming ocean.

VÉLEZ GANDÍA: And we got a lot of love for him. We saw him alive, very alive. He is one of the oldest in our reef, but he start dying. We saw the process of his death. So, we just admire him and remember him. It’s very sentimental, I don’t know, but it’s deep in the heart. 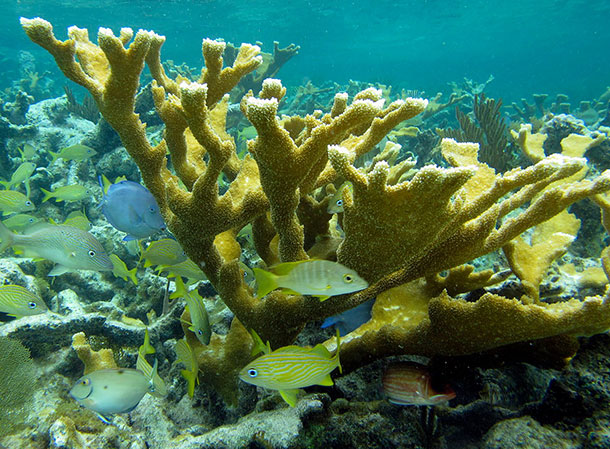 BASCOMB: Projects like this have actually been going on for nearly 20 years on a small scale.

But one million dollars of post-Maria funding allowed scientists from NOAA, the National Fish and Wildlife Foundation, and independent NGOs to speed up their efforts. The grant money will dry up soon, but workers have been able reattach roughly 15,000 pieces of coral to the reefs surrounding Puerto Rico.


Índice | Lifeguards of Our Reefs