The Humboldt marten is an elusive creature that prefers to slink in the dark corridors of dense old-growth forest along the Pacific coast. (Photo: Mark Linnell, U.S. Forest Service)

Deep in the coastal forests of California and Oregon, the Humboldt marten hunts for its next meal. This small but voracious predator is threatened by habitat loss, trapping and the boom of illegal cannabis farming. There are fewer than 400 left in the wild, and California’s Department of Fish and Wildlife is seeking to designate the Humboldt marten an endangered species. Senior Scientist Tierra Curry at the Center for Biological Diversity speaks with Living on Earth’s Jenni Doering about the long battle to get this charismatic creature protection.

BASCOMB: Humboldt martens are furry three-pound predators that live in the underbrush of the dripping-wet coastal forests of California and Oregon. They’re voracious eaters, and almost always on the hunt for snacks: a squirrel, a bird, or lighter fare, like berries, eggs, and insects. But this little member of the weasel family is threatened by habitat loss, old-growth forest logging, and even the recent expansion of cannabis growing operations. There are just 400 Humboldt martens left in the world and California’s Department of Fish and Wildlife says they should be listed as an endangered species. Tierra Curry from the Center for Biological Diversity says the martens deserve that protection. She spoke with Living on Earth's Jenni Doering.

DOERING: So, first, Tierra, how would you describe the Humboldt marten? 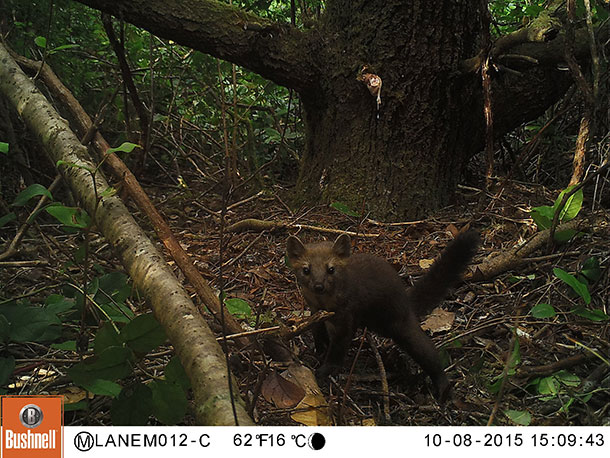 Despite weighing a mere one to three pounds, the Humboldt marten is a voracious eater and a fierce predator. (Photo: Mark Linnell, U.S. Forest Service)

CURRY: Well, it's like a little Tasmanian devil. It's a kitten that thinks it's a honey badger. It's this super secretive forest creature that doesn't want to be seen by anything but wants to eat everything that walks by. And they're adorable. [LAUGHS] From a scientific standpoint, they are just adorable.

DOERING: Have you ever met one?

CURRY: No, and every summer my son and I go out to the Oregon coast and we crawl into the bush and look around and hope to see one. And we've done this for four years now, and we haven't seen one. But I'm hopeful that if we can get them protected and get their habitat improved that he might get to see one someday.

DOERING: What's their behavior like? How would you describe that, Tierra?

CURRY: They're really stealthy and they don't want to cross open areas, which is why they became endangered. Ninety-five percent of their old-growth mature forest habitat has been lost, and that's how they got into this pickle where there's only 400 of them left in four separate populations. There's two populations in Oregon, two populations in California, and they can't get to each other because they don't want to cross open areas. If they venture out into clearcuts across the road, they get hit by cars or they get munched by bobcats or coyotes or other animals that hang out in the clearcuts. So, to save them, we've got to reconnect the four populations. 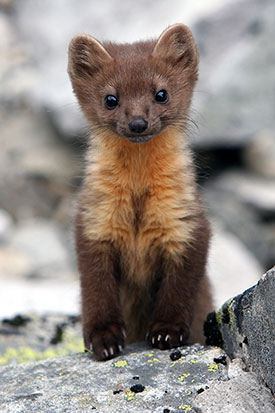 Once thought to be extinct, photos of the elusive Humboldt marten are extremely rare. Pictured here is a pine marten, a close cousin of the Humboldt marten. (Photo: Steve Slocomb, Flickr, CC BY 2.0)

DOERING: Why are there so few of them left in the wild? I mean, some 400, you said. What are their biggest threats?

CURRY: So, historically the biggest threats were logging and over-trapping. Ninety-five percent of their old-growth mature forest habitat has been lost. At the turn of the century they were commonly trapped for their fur. California banned trapping of them in 1946 because they were already concerned about the decreasing numbers. Oregon still hasn't banned trapping of them, so after 95 percent of the forest was logged, after they were over-trapped, then they were just left in these remnant populations. And now the remnant populations face new threats. On the central coast of Oregon, the whole population is west of Highway 101, in the sand dune, shore pine, shrubbery habitats. And they can't successfully cross the road to get to the more mature forest across the road, so they're threatened by population isolation. And then in northern California and southern Oregon, those populations are more threatened by wildfire and by the cultivation of illegal marijuana on public lands. So, these big illegal marijuana farms put out rodenticides to protect their crops, and then wild animals eat the rodenticides, so now those are a threat to martens, fishers, foxes, owls. Lots of wildlife are getting poisoned by them. So there needs to be a stepped-up presence to go get those operations off of federal lands. There needs to be more funding and just more people on the ground to protect our public lands from these illegal operations.

DOERING: You know, going up to northern California and southern Oregon, you just – you feel surrounded by trees. There's a lot of trees. Why aren't those trees enough?

CURRY: Because the specific habitat features that Humboldt martens need only come in mature forest, forest that's around 80 years old, and they need dense shrub understory that's packed with huckleberries and things for them to hide in and eat. And then, as trees age, they get scars and they develop these features and like funny branches and they get holes in them and lots of places – like if you're a kid playing hide-and-seek, that's like the Humboldt marten. It's got to find a hole or a big knot on a tree or a bush to hide under. 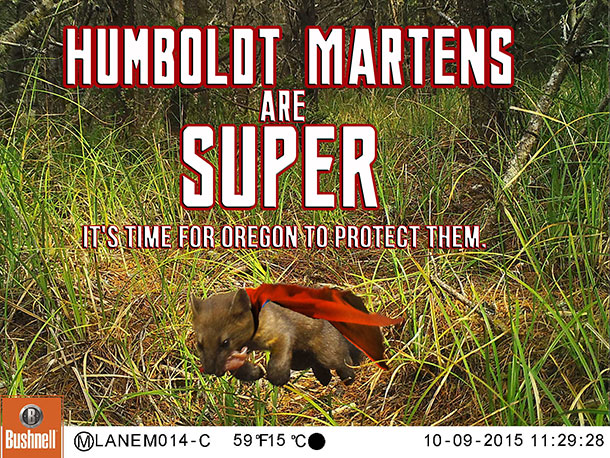 DOERING: So, if they're so secretive, Tierra, how do we know how many might be out there?

CURRY: So, researchers crawl on their bellies wearing heavy backpacks with cameras and track-plate stations and chicken legs and strawberry jam. [LAUGHS] They're just hungry little buggers. And if you watch the videos of them, they'll see these – it's non-lethal traps that get their footprints and a snag of hair for DNA analysis. And the marten, it'll be all troubled and walk back and forth at the entrance a couple times. And then it just can't resist the strawberry jam and the raw chicken leg, so it dives in and it leaves its tracks, it leaves a DNA sample. There's these remote cameras that snap a picture of it, so that's happened now for the northern California populations and the central Oregon population, and scientists are now studying the southern Oregon population. It's so rare that scientists thought it was extinct until a camera studying other things got a picture of one in the Redwoods in 1996.

CURRY: Right now, they don't have any protection at all, and it's so frustrating. I petitioned for Federal Endangered Species Act protection for them with allies back in 2010, eight years ago. The Fish and Wildlife Service made a not-warranted finding, and our jaws dropped. We were like, what do you mean it's not warranted? So, we sued and we won. The judge found that the agency didn't base the decision on the best available science and ordered them to redo it. That decision is going to come down the pipe at the end of September. It will either be a proposed listing, a not-warranted finding, or they'll get put on a waiting list for protection.

DOERING: And how long could they be on a waiting list? 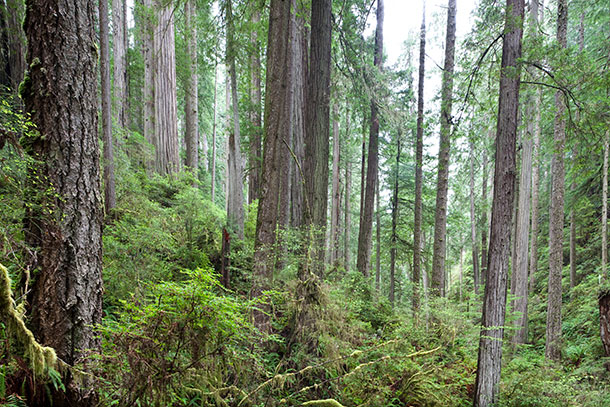 Old-growth forests, like this one in Northern California, serve as both Humboldt marten habitat and an important resource for the timber industry. (Photo: Wikimedia Commons, public domain)

CURRY: Average length of time is 24 years. Forty-two species have gone extinct on the waiting list. But there's an emergency provision if they get put on the waiting list, so if they did that, I would just submit an emergency listing petition for them and say, look, [LAUGHS] the best available science says these guys are in a real pickle and we have to help them. California's going to vote in August whether or not to protect them as endangered, and we just asked the state of Oregon to protect them as endangered. The only protection they have right now is California doesn't allow their trapping.

DOERING: Are there people out there who are concerned about what designating it as an endangered species could mean for local industry?

CURRY: Absolutely. Here in the Pacific Northwest, logging and timber is still a huge hot-button political issue. Any time you say old-growth species, a lot of people kind of freak out and are like, oh no, not another old-growth listing. And so I think the Fish and Wildlife Service is reticent to protect anything else that is associated with old-growth forest because of all the controversy around the northern spotted owl. And I think the agency is just shy, and I think that's why the marten got a negative finding. They shied away from the political controversy. But the thing about the marten is there's so few of them left. In Oregon, they're only found on federal land now because all the private and state land has been logged. And at this point, it is kind of an emergency situation to get them protected, get the population stabilized, and then look at reconnecting habitat corridors. 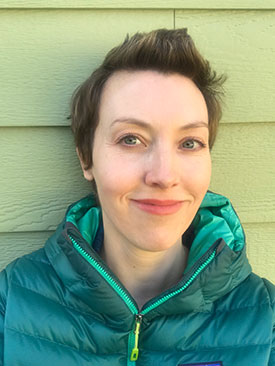 Tierra Curry is a Senior Scientist at the Center For Biological Diversity. (Photo: courtesy of Tierra Curry)

DOERING: What kind of response from the general public have you seen in terms of trying to save the Humboldt marten or give it an endangered species status?

CURRY: I'm getting e-mails from people all around the country who want to know what they can do to help the Humboldt marten, which is pretty touching.

DOERING: What do they say? Why do they care?

CURRY: I think people care because it’s so little and so cute and also because they've never heard of it, and it captures the imagination that there's this secretive animal living in wild forest that we've still never heard of. And it's like a fairytale character of the deep forest that represents the wild, and people are passionate about the wild and about wild animals and saving them. And to hear of one in our own country that they've never heard of before is kind of like watching the Discovery Channel or something and finding out something cool.

DOERING: You know, I almost suspect that some of those people would, if they could, love to have a Humboldt marten as a pet.

CURRY: I would love to have a Humboldt marten as a pet, but I don't know that I could afford to feed it [LAUGHS] because they eat so much – they're always hunting. I think you'd have to have a whole pantry of strawberry jam and chicken legs.

BASCOMB: Living on Earth’s Jenni Doering speaking with Tierra Curry from the Center for Biological Diversity.


The Guardian | Cannabis Growth Impact on the Humboldt Marten

More about the Humboldt Marten