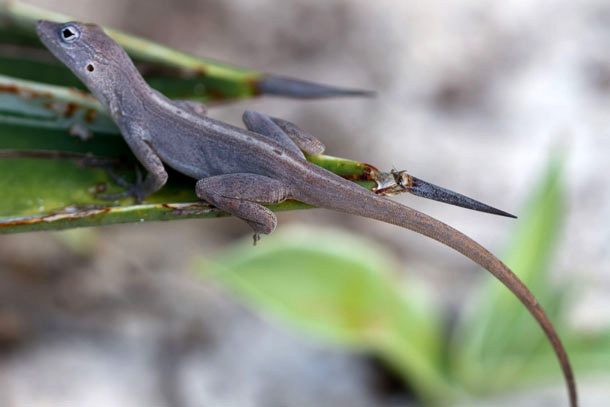 Hurricanes may act as a force of natural selection for Caribbean lizards, according to a recent study in the journal Nature. Living on Earth’s Don Lyman explains how scientists used leaf blowers to simulate hurricane-force winds to study how the hardiest lizards hang on.

BASCOMB: Later in the show, the me too movement in climate change research but first this note on emerging science from Don Lyman.

LYMAN: A recent study published in the journal Nature, demonstrated that hurricanes might act as a force in natural selection for certain lizards. Scientists were already studying a species of anole, Anolis scriptus, a small lizard native to the Turks and Caicos, when Hurricane Irma hit their study area in 2017. The scientists returned to their research site after the storm, and observed that the surviving lizards had longer forelimbs, shorter hindlimbs and bigger toe pads on average, than the overall population of lizards present before the hurricane.

The researchers speculated that perhaps these body characteristics might have helped the remaining lizards survive the hurricane, meaning hurricanes could be a factor in natural selection, possibly affecting the evolutionary trajectory of the lizards. But the scientists also wanted to know how the lizards survived the hurricane to begin with. Did they hide on the ground, or in crevices in trees, or did they ride the storm out by clinging to branches and tree trunks? 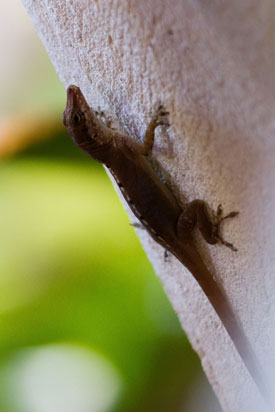 To find out they took lizards back to the lab, where they perched them on small wooden poles, then simulated hurricane force winds with a leaf blower, gradually ratcheting up the velocity. The researchers found that the lizards stayed on the perch, as opposed to fleeing, and moved to the lee of the perch – the side away from where the wind was blowing. As wind speeds increased, the lizards lost hold with their hindlimbs first, and hung on by their forelimbs until the wind was strong enough to blow them off their perches, unharmed, into a safety net.

Scientists caution that there may be other explanations for the body characteristics of the surviving lizards, but hurricane-induced natural selection, or in this case a leaf blower, seems like the best explanation. That’s this week’s note on emerging science. I’m Don Lyman.


The paper in Nature: “Hurricane-induced selection on the morphology of an island lizard”