An App For Urban Foraging 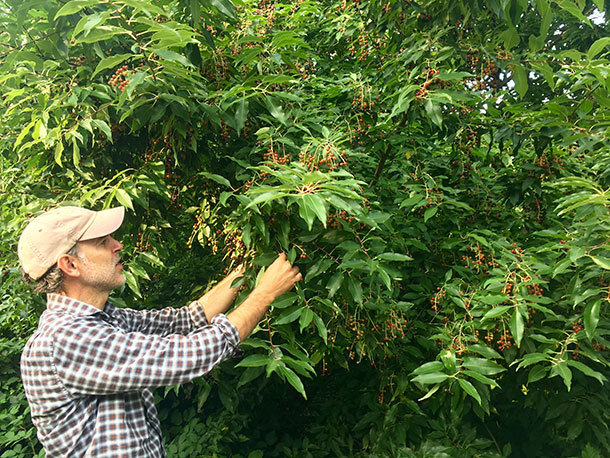 The harvest season brings a bounty of edible foods, even in cities. An online map called Falling Fruit is using public datasets to guide foragers to food for the taking. Living on Earth’s Savannah Christiansen reports.

BASCOMB: It’s the end of summer, a time when many city-dwellers visit local farms to go apple or peach picking. But if you know what you’re looking for harvestable food is actually all around us, even in cities. Urban foraging might sound fun but how do you get started? Well, like many things, there’s an app for that. Living on Earth’s Savannah Christiansen has our story.

CHRISTIANSEN: Memorial Drive in Cambridge is a busy thoroughfare full of traffic. It’s right across the Charles River from Boston. An unlikely place to look for edible plants but David Craft says that Magazine Beach Park, which sits between the busy road and the river, is one of the best places to forage.

CHRISTIANSEN: The thick clumps of weeds and grasses along the river bank are full of edibles.

CRAFT: Sometimes I find like lambs’ quarters and ladies thumb. I see some inky cap mushrooms right there by the base of that tree.

CHRISTIANSEN: David is an Assistant Professor of Radiation Oncology at Harvard Medical School. He’s also a local foraging expert. But if you don’t happen to have a foraging guru handy, there’s the Falling Fruit app, an online map that uses imported datasets to guide foragers to the locations of public fruit trees, edible plants, and mushrooms.

David and I pull open the map on our phones.

CRAFT: If I zoom into that guy...pokeweed.

CHRISTIANSEN: Orange dots on the map indicate the location of an edible. Sometimes it simply names the species. Other times, a user writes a description of the plant and a tip for when to harvest. For instance, mulberries are only good in June, and Linden leaves and Evening Primrose roots can be harvested in early spring. I notice a more familiar name on the other side of the park: black cherry. The user warns they’re not as good as store-bought cherries, but David and I make our way over to check them out anyway.

CHRISTIANSEN: We don’t get far before David stops and pulls a slender, white tuber out of the ground. 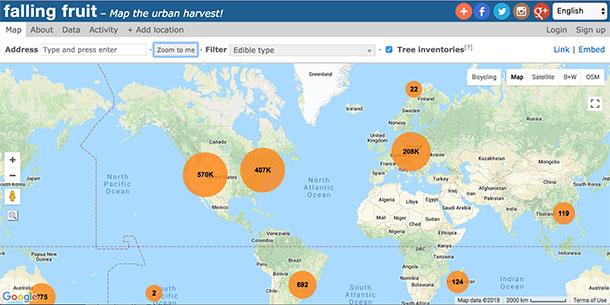 The home page of the Falling Fruit map. (Photo: Fallingfruit.org)

CRAFT: This is the wild carrot. It’s also known as Queen Anne's lace. You wouldn't eat it right now because it's too woody. Usually when a plant is flowering is not when you want to forage it. You want to eat the wild carrot when it looks like this, that's a new, young wild carrot we could actually eat that one, that one would be soft enough. And then you could…

The carrots you buy across the street there at Trader Joe's are a lot better than this. However, you can at least taste the distant memory of a carrot. You know it’s stringier. It's got a bitter aftertaste. But a long time ago people said, “hey it’s pretty good, let's bring these into our garden and let's select the ones that are bigger, and you know my gosh there's more one with an orange root!”

CHRISTIANSEN: David samples many of the things we walk by, crushing and smelling leaves in his fingers to help identify them. He stops at a shrub growing in the cracks of the sidewalk.

CRAFT: It’s called pineapple weed. It’s closely related to Chamomile and you can make a good tea out of this, and if you squeeze that and smell that, it's like a pineapple-y scent?

DC: Yeah fruity. It likes the beaten down, sandy soil next to bike paths. That’s actually its preferred habitat I find. Really compact, sandy, busted soil that nothing else likes to... it thrives there.

CHRISTIANSEN: We continue following the little orange dot on our phones towards the cherry tree.

CRAFT: Here we're coming up to a black cherry tree.

CHRISTIANSEN: Wow right on the edge of the bridge here!

DC: Yea see the cherries up there? They’re small...

CHRISTIANSEN: Oh, I didn’t realize it was such a large tree.

CHRISTIANSEN: All right so any of the dark ones are good?

CRAFT: Any of the dark ones are good to go. They have a pit. They're definitely not as good as a store-bought cherry. 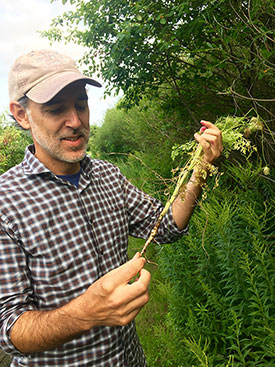 CRAFT: Now, you could find another cherry tree, perfectly ripe, somewhere across town right now and it would taste horrible.

CRAFT: I'm not sure if it's a genetic thing, or if it's the soil that it's growing in. So it's like nature versus nurture, I don't really know. But this is a particularly good black cherry tree.

CHRISTIANSEN: Despite the wealth of foraging possibilities, David says he still feels like the practice hasn’t caught on with many people.

CRAFT: I still can count on one hand, almost, the number of times I've seen other people out here foraging. And it drives me nuts when I’m picking some strange fruit from a tree in the middle of Boston and people walk right by me and they don't even ask it's like are you kidding me? You’re not slightly curious as to what this crazy guy is doing?

CHRISTIANSEN: So, you would want people to ask?

CRAFT: Yeah sure a little curiosity. And talk to your neighbors! People around you, you know? And it’s a nice it's a nice way to spend time with people too, you know, you can say “hey let's go for a walk in the river and try to identify some plants.” But if you're so cautious you don't try anything you're never going to kind of experience the fun that comes with harvesting a meal, or at least a snack.

CHRISTIANSEN: Foraging for snacks might be an unlikely activity for most people but a growing number of cities including Boston, New York and Los Angeles actually offer foraging tours each year. And for anyone who wants to skip the farm and go apple picking in their neighborhood this fall, there’s the Falling Fruit app. For Living on Earth, I’m Savannah Christiansen in Boston, MA.

Mother Nature Network “Urban Foraging is on the Upswing”