In this week’s trip beyond the headlines, Peter Dykstra and Host Steve Curwood take a look at the aftermath of Hurricane Florence, which damaged coal ash ponds and forced a nuclear plant shutdown but left solar power largely unscathed. And they note how time and time again along the North Carolina coast, homes in harms’ way have flooded and been rebuilt, at great cost to taxpayers. For the history lesson, they recall October of 1970, when President Nixon created the EPA and NOAA in just two days.

CURWOOD: So, let’s take a look behind the headlines now with Peter Dykstra. He’s an editor with Environmental Health News, that’s EHN.org, DailyClimate.org. On the line now from Atlanta - hey there Peter, how are you doing?

DYKSTRA: Doing all right, Steve, hope everything is well up there. I want to talk a lot about Hurricane Florence and some of its aftermath. You know, North Carolina is the number two state, believe it or not, in solar energy production, behind only California. And there was actually some relatively good news out of Hurricane Florence – the solar industry says it weathered the storm fairly well, even if all of the power lines that carry electricity didn’t.

CURWOOD: What was the secret, did they just tie them down?

DYKSTRA: Well, there’s one Duke Energy facility that says that they are able to automatically able to lock their solar panels in place, and the rest of it was just that the panels were constructed well enough that the category one winds that came ashore in North Carolina weren’t enough to do any damage. Unlike some of Duke Energy’s other means of power for the Carolinas, there was a coal ash dam that ruptured and sent toxic coal ash into a waterway. Also the Brunswick nuclear plant near the city of Wilmington was pre-emptively shut down, and it looked like solar energy was one of, if not the most reliable source of energy through the storm.

CURWOOD: Now what about wind?

DYKSTRA: There’s only one large industrial-scale wind farm in the state of North Carolina. They said they did well during the storm also. 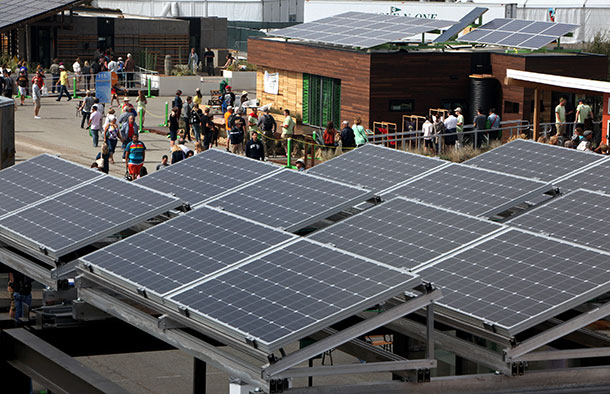 North Carolina is second only to California in the pace of growth of its solar industry. In the aftermath of Hurricane Florence, solar panels held up remarkably well, while coal and nuclear facilities faced difficulties. (Photo: Stefano Paltera, U.S. Department of Energy Solar Decathalon, Flickr CC BY-ND 2.0)

CURWOOD: So, sustainability sustained itself through the storm. What else do you have on Florence?

CURWOOD: Oh, my. Hey, what do you see in the history vault this week? 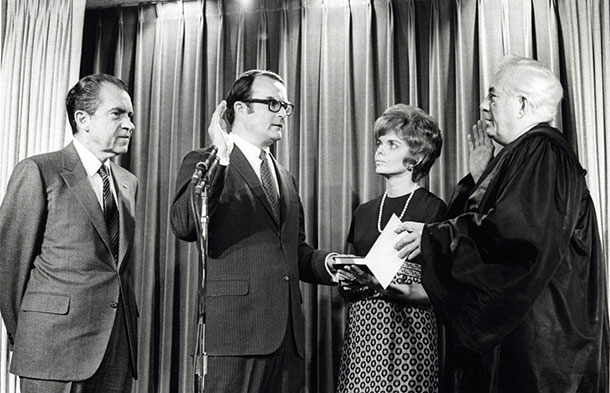 William Ruckelshaus was sworn in as the first Administrator of the U.S. EPA in 1970. President Richard Nixon, who created the agency, is shown overseeing the ceremony. (Photo: Richard M. Nixon Presidential Library, Wikimedia Commons public domain)

CURWOOD: And the government hadn’t been doing this stuff before, or?

DYKSTRA: They’d been doing a lot of it, but it was divided up into small offices, in different government agencies around Washington and around the country. And what Nixon did administratively is bring a lot of this work under two new roofs of NOAA and the EPA.

DYKSTRA: All right, Steve, thanks a lot, talk to you soon.

CURWOOD: There’s more on these stories at our website, LOE.org.

On October 2nd, 1970, President Nixon authorized the creation of the EPA