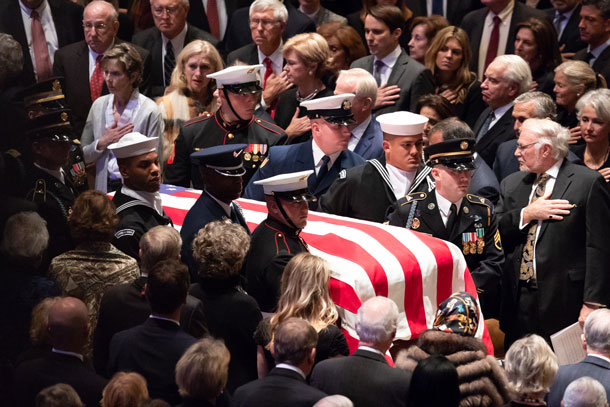 Peter Dykstra joins Host Steve Curwood to take a look at the environmental legacy of the late President George H. W. Bush, who strengthened the Clean Air Act, signed the UN Climate Treaty and once expressed a desire to be the “environmental president” of the United States.

CURWOOD: Peter Dykstra is the man who looks beyond the headlines for us here at Living on Earth. And he's on the line now from Atlanta. Peters an editor with Environmental Health News, that's EHN.org and DailyClimate.org. Hey, Peter, what do you have for us today?

DYKSTRA: Hi, Steve. We’ll talk a little bit about George Herbert Walker Bush, George Bush Senior. We’ve heard so much about him and his passing. There's a lot more to focus on for George Bush and the environment. He was a New England Yankee turned into a Texas oilman. And if you measure him by the standard of a Texas oil man, or even by the standard of a 2018 Republican, he was also somewhere between a good, or at least a benign, force on the environment.

DYKSTRA: Well he started in an aggressive multi-billion-dollar cleanup of nuclear weapons sites that goes on to this day, and will go on for decades more. He instituted a ban on elephant ivory imports, but his no-net loss of wetlands promise proved to be very, very difficult to keep. And his staff was not always on the same page that he was. Notably, his Chief of Staff - the avidly pro-nuke, pro-oil John Sununu.

CURWOOD: So Peter, what would you say was the crown environmental achievement of George Herbert Walker Bush?

DYKSTRA: His biggest mark is pretty clear to me, and that is clearing the air. The Clean Air Act was originally signed and passed under Richard Nixon in 1970. But Bush's Clean Air Act strengthened the US ability to deal with ozone, to deal with health issues, and to deal with acid rain, which is a problem that is still around in some circles, but has largely gone away and been solved, just like the ozone Hall is known to be closing up these days. Two big victories, both of whom George H.W. Bush had a hand in. 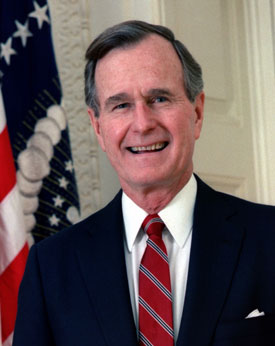 CURWOOD: Talk to me about George H.W. Bush's record on the climate.

DYKSTRA: Well, he had a little trouble getting the domestic ball rolling, but internationally, it's been said time and time again that he was strong on foreign policy, and he went to Rio de Janeiro for the first Climate Summit in 1992. He signed the UN Climate document that's gotten the whole ball rolling for the past quarter century on what the world can do in unison on climate change. It wasn't a perfect document, but it's something that today's White House would never consider.

CURWOOD: Indeed, that treaty is meeting as we speak, Peter, in the heart of coal country in Poland. A bit under stress, as President Trump has said that he wants to pull out of the international agreement, the Paris Climate Accord, but still so far, moving forward.

DYKSTRA: President Trump never promised to be the environmental president, which is exactly what George Bush said on the campaign trail. He also went out after his opponent, Massachusetts governor Michael Dukakis and hit him at home. Boston Harbor had serious pollution problems back then and George Bush, in a debate, said this.

BUSH: That answer was a bad as clear as Boston Harbor, now....

CURWOOD: Well, and Peter course today you can swim in Boston Harbor, and a lot of Bostonians love that song with the line, “love that dirty water”.

CURWOOD: [Laughs] Agreed. By the way, anything more about George H.W. Bush?

DYKSTRA: Something that has very little to do with the environment directly, but has a lot to do with me personally. As you know I've been in a wheelchair for nearly two years. President Bush signed and was a big advocate for the Americans with Disabilities Act. It's something that I benefit by every day. George Herbert Walker Bush is very much to thank for that law being a reality. 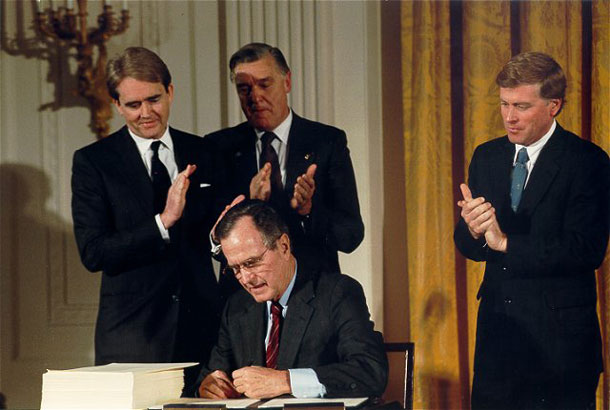 CURWOOD: Well, thanks, Peter. And I'm glad President Bush's life touched you as well. And I guess that also suffices for our usual history segment. So I'll simply say that you're an editor with Environmental Health News. That's EHN.org and DailyClimate.org. And thanks, and we'll talk again real soon.

DYKSTRA: Okay, Steve. Thanks a lot, talk to you soon.

CURWOOD: And there's more on the stories that our website LOE.org.