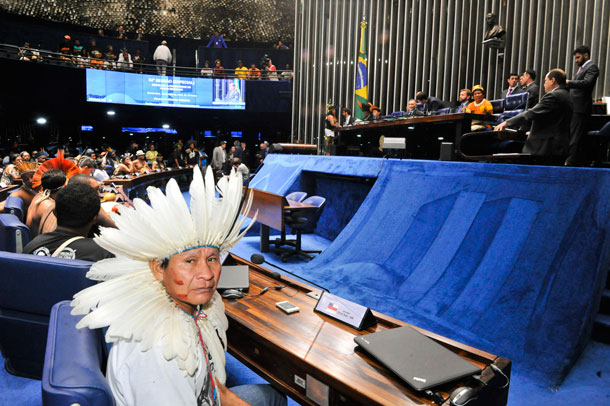 The Brazilian Constitution grants indigenous Brazilians exclusive possession of their traditional lands. However, the ability to demarcate and regulate these territories has recently been handed over to the Brazilian agricultural ministry. (Photo: Waldemir Barreto, Agência Senado, Flickr, CC BY 2.0)

On his first day in office, Brazil's president, Jair Bolsonaro shifted regulation of indigenous lands in the Amazon rainforest to an agency more friendly to development. Dan Nepstad from the Earth Innovation Institute joins Living on Earth's Bobby Bascomb to talk about possible impacts.

On his first day in office Brazilian President Jair Bolsonaro gave the Brazilian Ministry of Agriculture provisional power over the territories belonging to Indigenous peoples and the descendants of runaway slaves. Critics say this is a dangerous move. Most of these lands are located in the delicate Amazon rainforest. And many worry that this move will result in more deforestation and a weakening of Amazon protection. To explain is Dan Nepstad, Executive Director and Senior Scientist for the Earth Innovation Institute. Dan, welcome back to Living on Earth.

BASCOMB: So what exactly does President Bolsonaro's provisional measure entail?

NEPSTAD: Well, he came in on a campaign of basically freeing Brazil up from regulations, not unlike the President of the United States. And one of the historical debates in the Amazon especially is, how much land should indigenous groups have of their ancestral land. And that historic battle, his solution to it was to take the responsibility of defining and officially demarcating those indigenous territories from the Indigenous Institute in FUNAI, which is designed for that purpose. And he gave it to the agricultural ministry called MAPA. And it's a little bit like giving the keys to the hen house to the fox in that he really sort of threw the advantage on the side of those interests that want as little forest land as possible under indigenous control. 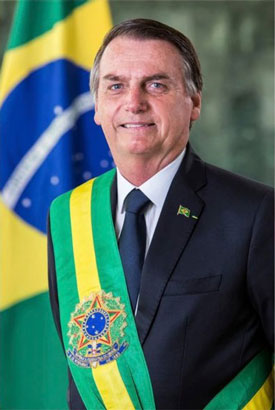 Jair Bolsonaro was sworn into office as president of Brazil on January 1, 2019. (Photo: Palácio do Planalto, Wikimedia Commons, CC BY-SA 4.0)

BASCOMB: So what was the role of FUNAI previously, and how will that work be done differently now, under the agricultural ministry?

NEPSTAD: What FUNAI has been doing over the years is there will be a very long process of defining the appropriate boundaries of indigenous territories and then having those formerly demarcated so that basically they're off limits to development. And now MAPA is responsible for that job. And the concern is that the many indigenous territories that are in the queue will now be dead in the water. And worse, that some that are quite far along the process could actually be reversed. Brazil has an enormous agribusiness sector, it's now about one fourth of the nation's economy. It's the main source of trade balance of payments. And that is all under the jurisdiction of the Ministry of Agriculture and Livestock Production, MAPA, and it remains to be seen how they will implement this new function.

BASCOMB: Can tell me a bit about the indigenous population in Brazil? I mean, where do they live, and how many people or tribes are estimated to be living there?

NEPSTAD: Brazil has got a couple of hundred indigenous languages, most of those are in the Amazon. And it's got one of the world's greatest diversities of indigenous people. In addition to indigenous people, there’re also traditional folks who've been living in forests for a century or more, and include colonies and communities of escaped slaves. And all of those people with these historical claims on land and forests are at risk right now. So the actual exact number of indigenous folks, that's about a million people. 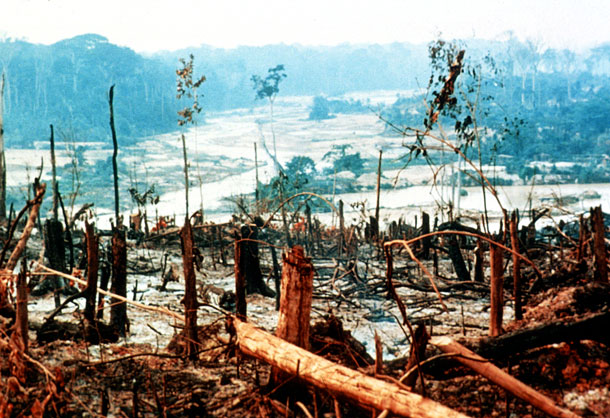 BASCOMB: I read a recent tweet from President Bolsonaro in which he said, “Less than 1 million people live in those places, isolated from the real Brazil; they are explored and manipulated by nonprofits. Together, we will integrate those citizens and give value to all Brazilians.” That sounds to me like President Bolsonaro thinks he's doing these people a favor by integrating them into Brazilian society, what do you make of that?

NEPSTAD: There is a whole narrative that indigenous people are primitive, they’re malnourished, they're under educated, they don't get proper health care. And in many cases, that's true. But I would point the finger at the federal government for those lack of services more than the fact that indigenous people are controlling their own destiny. There's, I think, a hunger among many indigenous people to have a better income, just to keep their people healthy, and their customs alive and their ceremonies going. And just in the last six months, I've been approached by some indigenous leaders really just saying, Listen, we have our territory now. But we need a source of income. And so I think there is needed economic alternatives for many of these indigenous groups.

BASCOMB: There are loads of studies and research that show the best way to protect rainforest is to empower the indigenous people living there. I mean, I've seen maps where they overlay a healthy rainforest and indigenous populations and they just overlap exactly.

NEPSTAD: We've done some of those studies and you're exactly right.

BASCOMB: How will this change affect the ability of indigenous people to protect their land?

NEPSTAD: That's something that's very much up in the air. One of the sort of bright spots right now – [GECKO CALLS] sorry, there's our gecko in the background. There's a new set of partnerships between indigenous organizations -- the organizations that represented indigenous groups -- and state governments. And amazing progress, in sort of bringing those indigenous leaders to the table so that they are part of the policy process and they're saying what they need; that includes those economic alternatives that I was mentioning earlier. You know even as Bolsonaro cracks down and weakens FUNAI we have some signs of hope that indigenous people who will be getting some of the support they need and a stronger voice in the policies that define the future of their region through these state level partnerships. 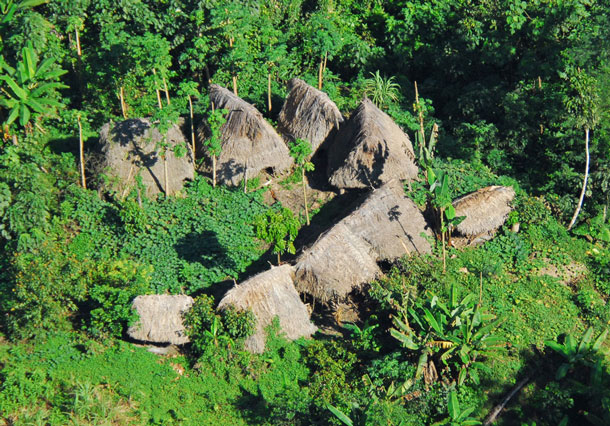 In addition to nearly a million recorded indigenous Brazilians, there are still a number of uncontacted peoples who live deep in the Brazilian Amazon. (Photo: Gleilson Mirando, Governo do Acre, Wikimedia Commons, CC BY 2.0)

BASCOMB: Now, of course, the Amazon is already a stressed ecosystem, there's talk of a tipping point; after a certain amount of deforestation, there's just not enough forest left to keep the whole system thriving. How likely actually, is that do you think? And how close are we to something like that, especially in light of the changes that President Bolsonaro would like to make.

NEPSTAD: I think we are fairly close. In a normal year, an Amazon forest doesn't catch fire if it hasn't been disturbed. So under severe drought, fires move into those forests that kill trees. And then that forest is susceptible to further burning, even when it's not severe drought. So that sort of perfect storm of conditions is coming together more and more frequently. And we could be looking at just a huge, sort of a die back driven by fire and drought. Where the exact number is, you know, I think, to be cautious, we shouldn't go below 80. And we should have a big reforestation campaign right now. But the science, falls between, 65-80 as to where that tipping point is.

NEPSTAD: Of the original forest?

NEPSTAD: Yeah, so we're at 80 now. And if we lose, go down to 70, the chances of a major tipping point are considerably higher. A lot of it depends on, climate change itself, and how quickly the heating takes place, and the sort of extreme weather events more than sort of the average temperature. And if we keep getting these very weird droughts in the Amazon, then I think, maybe 80 isn’t enough.

BASCOMB: Well and of course, it's a feedback system, right? So if you have climate change, which is making hotter temperatures, and it's drier in the Amazon, you have forests dying, that exacerbates climate change because, you don't have those trees, sucking carbon dioxide out of the air, I mean, it's a, it's a terrible runaway system.

NEPSTAD: Exactly, yep. And even if we make huge progress in coal-fired electricity, and etc, we could still not win the war. The best estimates right now are that tropical forest globally, you know, slowing the loss and speeding the recovery, where they're already gone, could be about a fourth or a third even of what is needed by 2030 to avoid the really dangerous impacts of climate change. And they're getting about 3% of the finance, so it's this big mismatch globally in terms of the potential importance of tropical forests for avoiding climate change, and the level of attention and finance flowing to them. 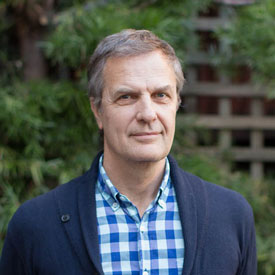 BASCOMB: Is there any reason to be optimistic here? I mean, can the Amazon outlast one president?

NEPSTAD: I am optimistic, actually. And that being, cause I think, similar to the climate change debate in the United States, people are seeing why climate change is important, and why we need to solve it with their own eyes, despite the climate deniers, despite the rhetoric saying how it's holding back our economy. In Brazil, more and more people are seeing the advantages of having forests. And when forests are falling, your kid has a much higher likelihood of having bronchitis. When forests are falling and being burned, airports are closed and transmission lines are getting burned. And there is a growing sense that Brazil has made a huge achievement and let's consolidate that achievement and really be proud about the Amazon. And I think if conservation strategies tap into that hope, Brazil will contain the Bolsonaro presidency.

BASCOMB: Daniel Nepstad is executive director and senior scientist for the Earth Innovation Institute. Thanks for taking the time with me today, Dan.

NEPSTAD: Thank you. It's my pleasure.