Eminent Domain and the Landowners Who Wouldn’t Back Down 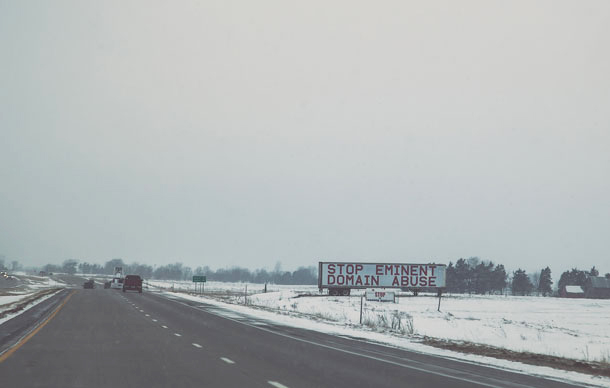 The government’s ability to exert its eminent domain powers has literally paved the way for much of America’s fundamental infrastructure. Pipelines, highways, railroads, high-voltage transmission lines and more tend to require long paths across the landscape, and farms and even suburban neighborhoods can be caught in the middle. A new book, “The Habit of Turning the World Upside Down,” takes readers to some scenes of places defined by conflicting American ideals of property ownership. Author Howard Mansfield joined Host Steve Curwood in the studio to discuss the costs of eminent domain and why some residents have successfully fought back its threats to their homes.

CURWOOD: In Western society, a deed is a binding legal document that grants you ownership over a house or piece of land, until you sell or pass that property on to your heirs. But at any time, the government can take it through eminent domain for a project that it considers to be for the greater public good. But not everyone agrees what is the public good when taking away private property. The project could be an unpopular oil pipeline, highway, or border wall. And even when the project offers a substantial payout, some folks just don't want to leave their homes, and a fierce legal battle follows.
In his new book called The Habit of Turning the World Upside Down, Howard Mansfield looks at American ideas of property. He joins me now in our studio. Howard, thanks for coming in.

MANSFIELD: Thank you. Happy to be here.

CURWOOD: So, you have a number of fascinating stories in your book, Howard. Not all of them are happy stories, and--

CURWOOD: --you write about the story of Romaine Tenney, Vermont dairy farmer who in the 60s became -- well, he was known nationally as a symbol of a quickly disappearing America. Tell us the story of what happened to Mr. Tenney when a major highway project was slated to go right through his farm.

MANSFIELD: In 1964, Romaine Tenney was a bachelor farmer. He had no running machinery on his farm. He used workhorses, he milked his 50 or 60 cows by hand. He cut hay with his horses. Everyone in town knew him. The major road happened to hug his cow barns, they would see him there working there late at night. He loved his animals, his animals loved him. And then, Interstate 90, the interstate's coming right up the Connecticut River Valley. And they're laying it out and they take a sight right off his cow barn. And in the end, he refused to move, and they were bulldozing and dynamiting right around his house. And he had to be out, there was a court order. And then one night he set everything on fire, shot himself. He committed suicide. Shook everybody really up. It had to be another way, that this shouldn't have happened. It's a grim story. But at the time progress was the religion of America; progress you could say was the gravity of America. Everyone believed in it, people at the time were happy to settle with the state of Vermont to make way for the interstate. You know, so when hills were leveled, when swamps with filled, people were happy to settle because everyone believed in this new thing coming along. And that has changed.

CURWOOD: So of course, the state was able to put the highway through his land, right, the edge of his barn, because of what we call eminent domain.

MANSFIELD: Yeah, and that's -- so, eminent domain, it's in the Constitution, you have to receive just compensation. And that has been interpreted forever as market value. So, here's the essential problem: to Romaine, the land was far more than its market value. He loved the land. So, you're trying to pit a quality, a feeling, a way of life against something that's quantified. And that's always the problem. And the other problem with eminent domain is that the party taking the property ends up setting the price, even if you appeal and that's basically a broken market. 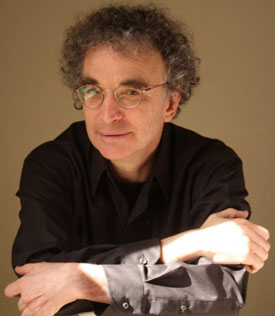 Howard Mansfield writes about history, architecture, and preservation. He lives in New Hampshire with his wife, the writer Sy Montgomery. (Photo: courtesy of Howard Mansfield)

CURWOOD: So, "just," of course, is associated with justice.

CURWOOD: And to what extent does the American system of using eminent domain -- to build highways or put up major shopping centers or schools -- to what extent is that just, Howard?

MANSFIELD: You know, if you look historically, and particularly if you look in the 19th century, you'll see individuals all over the place, bearing the burden of whatever economic improvement is made. There's a legal textbook from 1895, which I read part of and it said, "the quiet citizen must keep out of the way of the exuberantly active one." So, in other words, the burden of proof is on you, the quiet citizen, why your pursuit of happiness should stop property in motion.

CURWOOD: So, talk to me more about America and this ability to use eminent domain; where did it come from? And of course, the way you write, sounds like you feel that we don't have this right at all.

MANSFIELD: Um, well, I think the best answer for where it comes from, is a definite belief in economic progress that everybody shared. Here's a good sample case, just to cut right to the chase. A big railroad's coming through a town in the 1890s or something. They put it through, totally destroy this man's farm, his land, you know -- big sooty mess. Goes to court, the judge says, well, too bad, but you're going to benefit from the overall economic well-being as it improves in town. Well, essentially, that man is now stuck subsidizing this project, he's been assigned risk and expense that he didn't choose. So, there's a great injustice there. I think what you see in a lot of the protests is people are saying, No, no, wait a minute, wait a minute, I have a deed to this land, I've been paying on this land, and you tell me that you have the right of way over my pursuit of happiness? And that seems unfair.

CURWOOD: You write about a rather strange bit of railroad property maneuvering, in something called the Gadsden Purchase

CURWOOD: Tell us that story.

MANSFIELD: Okay. Um, when I was in school, they would roll down these maps in front of the classroom. You know, a big map of the West, and you'd see the Louisiana Purchase, which is shaped like a big lamb chop, almost. And then you've got, you know, Texas -- and then there's this little flap of land or the end of the liver, as it was called it in its time. That's the bottom of Arizona and New Mexico. That's the Gadsden Purchase. It happened during the Franklin Pierce presidency, 1850s. It was bought after the war against Mexico, and it was bought so there would be a southern route for the Southern Pacific Railroad. It was completely a railroad deal. But here's the thing about it. I went out to walk on the reservation of the Tohono O'odham. They're beset with a lot of problems, high diabetes rate, high poverty rate, and the desert museum, the Arizona Sonoran Desert Museum out there was having a walk to reestablish traditional diets. So, I walked with them a few days. And I'm as I'm walking along, I realize, Oh, my God, I'm walking in the Gadsden Purchase! And I thought, well, that's really foolish. But on those old maps, there were no people, it was a blank space! But to Tohono O'odham, it's holy space, it's holy land, their sacred peak is there. But to us, it's a blank space on a map, a way through to go someplace else. So, you have two different views of land: somebody's land deal, and it's somebody holy land. And there's that clash.

CURWOOD: So, what does the Gadsden Purchase tell us about the downside of the way we deal with property in the United States?

MANSFIELD: Well, if you look at the, to go back to those maps, they're all about the boundaries and not about what's inside them. So actually, we have it all completely backwards. And if you look at those old schoolhouse maps, that we grew up with, the names of the tribes -- the Pueblos, the Papago, which were the names we had at the time for the Tohono O'odham -- they're just kind of floating across the landscape like clouds, so, therefore, they have no fixed boundaries. So, therefore, in the view of those maps, and in the view of white people and in the view, how the law developed, they have no property rights. And that's another characteristic mark of property in America. 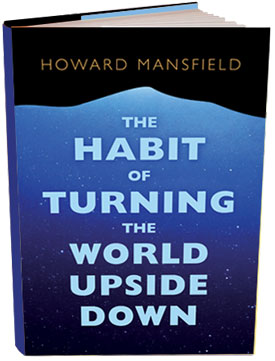 “The Habit of Turning the World Upside Down” explores Americans’ belief in property, and the cost of that belief. (Photo: Bauhan Publishing, LLC)

MANSFIELD: They were dogged. They learned immediately the process, they learned what rights they had, and what rights were lacking. They contacted every possible representative in sight, they learned the energy issues way deep, they sat up late at night, learning all about the needs for natural gas, and were they being met. And what was really in the pipeline. And what's this shortage that happened during one winter -- was that really so? So, they were actually model citizens when you look at it, and they just fought tooth and nail. They showed up, they testified. And then they showed up and they testified again, they met with anybody who would listen to them, they spoke truth to power. And they won.

CURWOOD: What do you think was the critical difference for them? How was it that they stopped this gas pipeline project? Was it that the project was in no small part designed to export natural gas, as opposed to serving the region? Was it because it was going through really loved pieces of land and areas? Was it that the gas people pick the wrong community to go through? What was the key for their success?

CURWOOD: At twice the capacity that New England needed.

MANSFIELD: Yeah, yeah. There was all sorts of squirrely things about it. They were sort of masters of giving out incomplete information. There was a number of distinctive things in Massachusetts. And one -- I can't recall the exact name of this law, but you couldn't give up conservation land without like a two-thirds vote of the state legislature. Also, I would say there's a lot of knowledge, a lot of sort of citizen scientist knowledge out there now that so many people have advanced degrees and can connect with the internet. I think those two things make a big difference. I really do.

CURWOOD: Howard Mansfield is the author of The Habit of Turning the World Upside Down, and nine other books. Thanks, Howard for taking the time to stop by.

MANSFIELD: Thank you very much, Steve. I enjoyed it.


“The Habit of Turning the World Upside Down”