Listening to Forests Can Aid Conservation 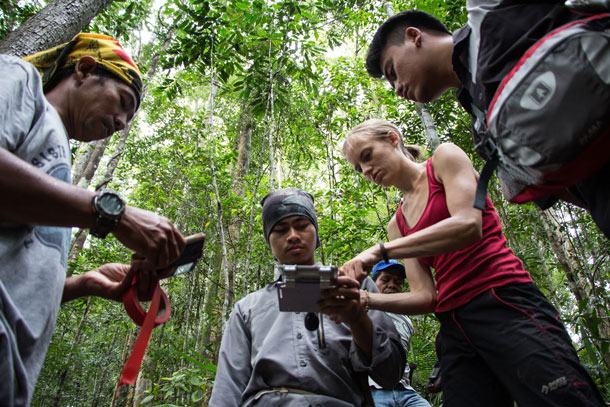 A technique called bioacoustic monitoring is helping scientists get a better picture of the biodiversity of forests. Animals like birds, primates and insects make sounds that can be picked up by recording devices and tell scientists a lot about the health of a forest. Rhett Butler, the CEO and founder of the environmental news agency Mongabay, talked with host Bobby Bascomb about the possibilities of using bioacoustics data for conservation in places like the Amazon and the Bornean rainforest.

A tropical rainforest looks a bit like broccoli from above. Tall canopy trees spread their branches ever higher and wider in search of the sun, creating a bumpy uneven carpet of green. Satellite images of a rainforest might show a lush tree canopy, but they reveal very little about the biodiversity of the ecosystem. So, to see if a forest is intact and healthy, perhaps we should be listening instead of looking. Using a technique called bioacoustics, researchers are exploring ways to monitor forest health by listening to the animals living there. Rhett Butler is editor in chief of the environmental news agency Mongabay and co-authored a recent paper about bio-acoustics in the journal Science. Rhett, welcome to Living on Earth.

BUTLER: Thank you. It's a pleasure to be here.

BASCOMB: So you can listen to an ecosystem. Why is that preferable over something like remote sensing, using satellites to look at an ecosystem, as opposed to listen to it, or even on the ground surveys?

BUTLER: Well, remote sensing is really important. It gives us a very big picture look at what's happening. But if we want to actually see what's happening under the tree canopy, then using something like a camera trap can be very useful. But bioacoustics is really interesting, because you can capture a much broader range than you get with camera traps. So this gives us a more nuanced look at what's actually happening under the tree cover -- what species are present, and even the health of an ecosystem.

BASCOMB: So how many of these study sites do you have in place, and where are they?

BUTLER: My coauthor and the lead author on this paper that just came out in Science, Zuzana Burivalova, and our other coauthor Eddie Game, they have study sites in Borneo and Papua New Guinea. That said, there are a lot of other researchers who are using bioacoustics all around the world. So we're talking a very large number of sites where data is being collected right now.

BASCOMB: So how does this work in a place like the Bornean rainforest? I mean, tropical forests are, by definition, hot wet places. That's not the best environment to have sophisticated recording devices lying around. 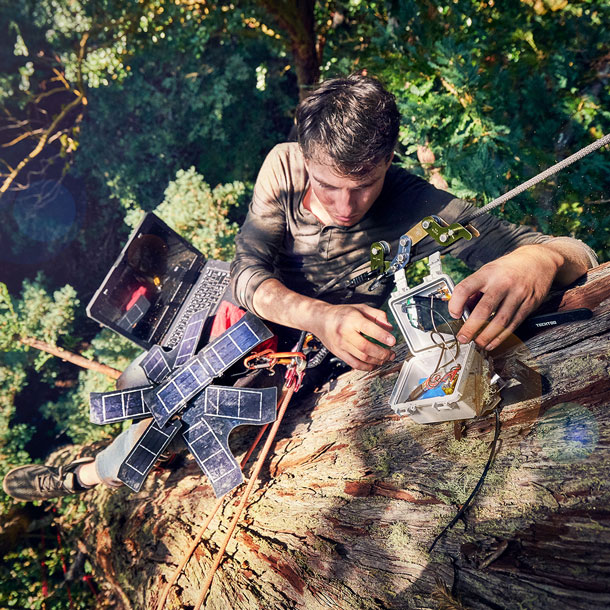 Bioacoustics allows researchers to gather data over time and determine what are the best conservation methods in protected areas. (Photo: Ben Von Wong)

BUTLER: Yeah so there a couple of ways to go about this. So the most common way is to use these waterproof boxes that have a recording device in them, and these are very standard, off the shelf stuff. It's really not that expensive anymore. And you just mount these in the trees. So you can set them to record at certain times of the day, and then just come back and collect the data every, you know, few weeks, months. So that's, that's one mechanism. A more exciting mechanism, from my viewpoint, is setting up something that's linked to a network. And so there's this project called Rainforest Connection, which uses modified cell phones, and it mounts these high, maybe 100 feet in the canopy, and it has a solar array around the cell phone to power it, and they just sit up there and collect data and then send it in real time, because there's a network link, and then it, you can listen to it, you know, in California.

BASCOMB: If you had an interconnected network like that, I imagine that opens up the possibility, too, of more enforcement. So if you hear a chainsaw or gunshot or something in the forest, you could send out law enforcement to go check it out and address the issue.

BUTLER: Exactly. That's, that's one of the most exciting things about this space, is the possibility of doing real time law enforcement and other forms of interdiction. So if you hear a gunshot, if you hear a car engine, if you hear voices, you know, you can get a real time alert and then take action as something's happening. And so with satellite data, you have this delay. With most systems, you're looking at, at best a week delay in terms of when you start to see something on a satellite versus when you can actually take action. So a bioacoustic system that's networked, you could actually take action before deforestation occurs. So once you first start to hear the first chainsaws you could send someone in before it actually becomes deforestation.

BASCOMB: Well, you've sent us some examples of what a healthy forest sounds like versus one that's been selectively logged. Let's take a listen before and after. I believe this is from Borneo, right?

BUTLER: Yeah. So this would be from East Kalimantan which is Indonesian Borneo. And this would have been recorded by Zuzana Burivalova.

BASCOMB: Great. Well, let's take a listen to the before.

BASCOMB: What are we hearing there, Rhett?

BUTLER: Well, you're hearing a very busy forest. So all these different frequencies are being filled by different animals. And so you can hear kind of, the raucous call of the hornbill; you have a lot of other birds; the background noise is a lot of insects; there's a gibbon calling, which tends to be on the low end of the spectrum. And so, Bernie Krause, who's kind of a legend in this, in the soundscape ecology field, and I think even coined the name, you know, he's described this as there's different niches and you'll have different organisms that fill different parts of that. I think in this example, you can really hear kind of the full range of animals and it showcases that this is a biodiverse, healthy system.

BASCOMB: Well, let's hear the same area after selective logging has taken place. I believe it's about two weeks after the forest was logged. Let's have a listen to that.

BASCOMB: Yeah, it really is. Well, what got you interested in how bioacoustics can be used to monitor forest health?

BUTLER: So this project emerged out of a series we did a couple years ago looking at what works and what doesn't work in conservation. And that series specifically looked at what does the science tell us. And we hired Zuzana Burivalova, who again is the lead author on this paper, to be the lead scientist on the project. And what we found is that the science has not done really a great job at evaluating effectiveness of different conservation interventions. So it's hard to say what really works and what doesn't work based on the science. So you have to kind of go into the gray zone and anecdotal evidence. And so that got us thinking about, well, are there ways that we could kind of address this issue, and Zuzana works on bioacoustics. And digging into it a bit more, it seemed like a great way to scale up monitoring of biodiversity, which could then be used to inform evaluations on what's working, what's not working, because you could compare different conservation interventions and say, okay, well, in this forest, you have this level of biodiversity, where in this one, it's a lower level or something like that. So the other great thing about this is that you can create historical baselines. And then as technology and species identification improves over time, you can go back and run algorithms against that original data and see what's been lost and how things have changed. 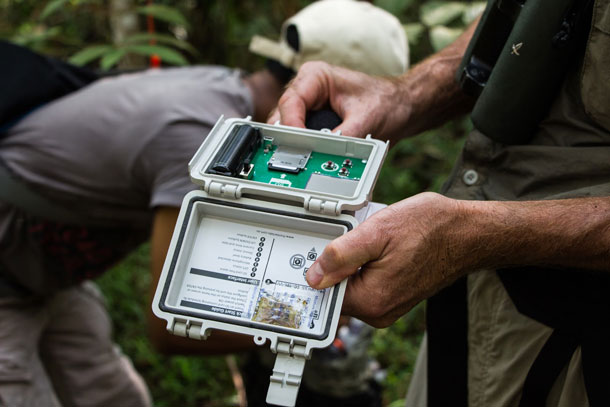 BASCOMB: Or, I mean, there's sustainable palm oil growers. But how sustainable is it really, if you're not protecting the biodiversity? I guess you could use it in that way.

BUTLER: Yeah. And so we see a big opportunity around these zero deforestation commitments that a lot of palm oil companies have been signing. And so the idea of one of these commandments is, a palm oil company may have an area of forest within their concession that they agree not to chop down as part of this commitment. But what bioacoustics could do is it can tell us the quality of that forest area. And so one of the issues in oil palm plantations is because you have all this fruit on the ground, in Asia, you tend to have explosions in the population of pigs. So then the pigs are, you know, feeding on this oil palm fruit and then they kind of run amuck and take over the forest reserve. And so you may end up with a highly degraded forest reserve, and even though it's protected, it's no longer a high-quality forest. You know, in other cases you may have hunting within these concessions. So you may see, okay, well, there's trees there, but there's no actual wildlife on the ground. So that's one aspect, you can use it for monitoring. But companies could also use it for looking for risk to their commitments, so they could hear whether you're, the area you've committed to protecting is being cut down, or threatened by poachers or things like that. So a company could actually, you know, send in someone to take a look at what's happening in that forest. And where this is particularly relevant is in Southeast Asia, so Sumatra and Borneo, where in the dry season, you have a high risk of fire. And so if you have forest reserves that are supposed to be protected and are within these concessions, and all of a sudden you're hearing gunshots or voices or, or chainsaws, that tells you that there are people present, which is a risk for fire. Because all it really takes is one cigarette in a dried out peat area to trigger a fire that could then get a company in a lot of trouble.

BASCOMB: What do you see as the future of using this technology, are you looking to scale up and have it in other parts of the world?

BUTLER: What I would love to see is all this data being collected in a central repository that's open to scientists who could then run algorithms against the data to look for patterns. So it could be anything from species distribution to degradation to the impacts of climate change. This could become really powerful with networked bioacoustic devices, where you have large amounts of data getting just fed into the central repository. So I think if you took that, combined it with camera traps, especially networked camera traps, and then satellite data, you would get a really, really a much better picture of what's happening with biodiversity, wildlife populations and forests in these places.

BASCOMB: Rhett Butler is the founder and CEO of the environmental news agency Mongabay. Right. Thanks so much for taking the time to chat with me.

BUTLER: Thank you. It's been a pleasure.