California Tree Deaths Could Hurt Forests on the East Coast 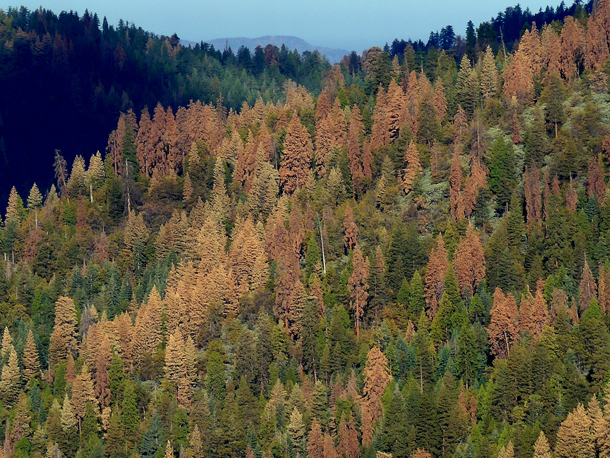 New research shows that tree deaths in California can hinder plant growth all the way across the continent in Eastern North America. Abigail Swann from the University of Washington, explains to Living on Earth’s Steve Curwood how tree deaths cause changes in atmospheric moisture and impact local climates thousands of miles away.

BASCOMB: Deforestation and tree loss are not isolated to the tropics, of course. Since 2010 roughly 130 million trees have died in California alone. Instead of chainsaws and agriculture, bark beetles and drought are largely to blame but the result is the same. And according to new forest modeling research those tree deaths in California can have big impacts on other parts of the country, as far away as the East Coast. Living on Earth’s Steve Curwood spoke with University of Washington Professor Abigail Swann about her recent study published in the journal Environmental Research Letters.

SWANN: We looked at a bunch of regions in the US. And we've looked at what would happen if forests were removed in those regions. And these are regions that the National Science Foundation has identified as sort of eco-regions. And we took each of these ones that had a lot of forest cover in them, and we said, What would happen if those forests were gone? So it turns out that plants are able to influence the atmosphere around them, so they can influence the local climate that's experienced nearby, but that the atmosphere, because it is circulating around, is moving, those local changes, they can get communicated to other places. And so changes in plants in one location can actually have impacts on the climate somewhere else. And that can also impact the plants somewhere else. Because plants are influenced by the climate that they're experiencing. We found that the location of the forests really matter. So in general, losing tree cover in the West, particularly in areas like California had bigger negative impacts, meaning it, it led to less plant growth across the continental US. But there were some places where removing trees led to more plant growth across the US in general.

CURWOOD: So what makes a difference?

SWANN: It's really the location of where those plants are, and how they're able to influence the atmosphere and what changes in climate that leads to, that plants care about. So what we found is that in general, plants grew more when the summers were a little bit cooler and a little bit wetter. And so if forest loss led to hotter summers, or drier summers, then we saw less benefit for plants in general.

CURWOOD: How exactly does that work? I imagine it's related to evaporation, among other things.

SWANN: Right well, the local surface temperatures care a lot about how much water gets evaporated. So in general, when water is able to evaporate off the surface, you'll get less change in temperature. So your skin, when water evaporates off your skin, when you sweat, it helps keep you cool. If there isn't as much water available, the surface is likely to get warmer. And so that influences the local temperatures. The reason the atmosphere can sort of propagate that signal elsewhere is because it's essentially, you know, the atmosphere is a big fluid. And so waves and other things propagate in the atmosphere. And that signal can be transmitted somewhere else where it then has some impact on climate. The really classic example of this would be like an El Nino. So we're all pretty comfortable with the idea that this thing called El Nino influences climate in places in North America. But it's actually a big sloshing around of temperature in the tropical Pacific Ocean. And so that big sort of oscillation in temperature in the tropics influences the atmosphere, kind of like dropping a rock in the pond. And that signal propagates to North America where it then influences temperature or rainfall over different parts of the US.

CURWOOD: So what you're saying is, if you lose a bunch of trees in California, it's like dropping a rock into this fluid we call the atmosphere, and the ripple will come out east and it'll have effect on trees there?

SWANN: That's the idea. And our hypothesis, based on these simulations, is that that impact is generally bad for plants across the eastern US.

CURWOOD: And remind us of what's driving the tree loss to begin with in the West.

SWANN: Right. So the tree last that we are seeing across California has really been driven by an extreme drought over the last few years. So it's been very dry. And I think the Forest Service has estimated about 120 million trees have died due to these really harsh conditions of low water and high temperature. And so there, there has been pretty significant tree death occurring across California just in the last couple of years. But more extensively across the western US in the last decades, we've seen a lot of trees that have died due to beetle outbreaks and other pest problems. 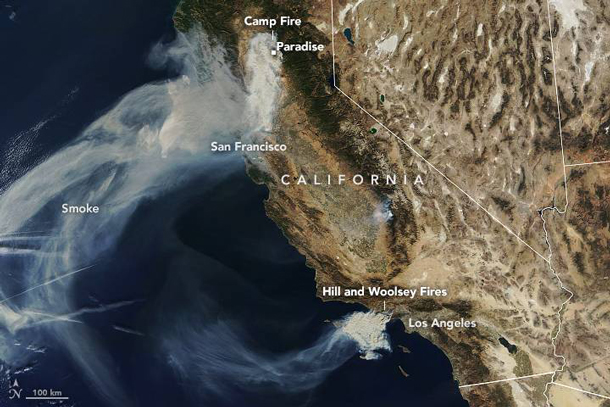 Wildfires in the forests of the American West are becoming more frequent and, in California, they took a devastating toll on lives and property in 2018. (Photo: NASA Earth Observatory)

CURWOOD: A couple of decades ago, people looking at how much carbon was going into the atmosphere from North America were doing a happy dance about all the trees that had come back in the East that had been cut down, during the farming in the 1800s. And now this area, especially Adirondacks, is afforested, you guys would say, and that this was sucking a lot more carbon out of the atmosphere. What you're telling me is that, well, wait a second, those trees may not be in such a great position now to remove carbon given what's happening out West.

SWANN: Well, that's possible, right? And this is one of the big uncertainties of how much carbon the whole land system will be able to store going forward is, you know, we there has been an uptake of carbon by those forests, as they regrew. But I think it's very uncertain what that will look like, as we go into the future -- either in North America, or really anywhere else on the globe. There's things about changing climate that will help plants grow better, like increasing temperatures in places that were colder; higher levels of carbon dioxide help plants grow a little bit more. But if they become more water stressed or if it leads to more plant death, that could be really bad. And this is a huge open question in our scientific field that we really don't know the answer to yet.

CURWOOD: So Abby, you study atmospheric science and biology. Sometimes you scientists say that our present time, or up until recently, anyway, we were in a fairly stable what you call an interglacial period, that things were staying pretty much the same. To what extent does your research suggest that well, things really aren't so much the same anymore?

SWANN: Right? Well, I'd say climate change in general, is pushing us very strongly out of that stable environment that we've been in in the past. And as you mentioned, climate change can lead to more stress on trees, that can lead to more tree loss. And we think that in a specific example of our own research, that this would have these larger scale impacts. In general, I think if we think about land systems and plants and how they grow, there's a lot of unknowns about what tipping points might exist. If you think about a system like the Amazon forest, and is it vulnerable to change? What will that system look like in the future under a much hotter climate? We have no examples on Earth right now to compare that to. There aren't places that are hotter than the Amazon but also wet, so we have no place to look to see what that might be like. And so there's a lot of work to do from a scientific standpoint, to try to understand that. But also, I think it's important to say that we don't understand yet, but the potential is scary.

CURWOOD: A number of years ago, the Met Office, that is the UK weather and climate modeling group, said that by the year 2050, the Amazon really could just be a grassland. What do you make of that research? And given your research, what might that tell us? Or what might that warn us? 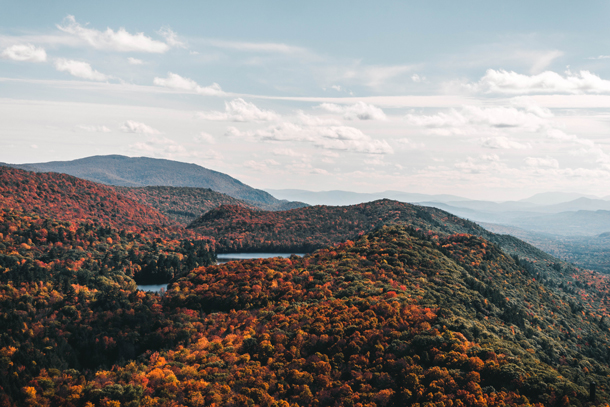 Forest loss in California could hinder the growth of trees and other plants on the East Coast. Here, a Vermont forest in the midst of its colorful autumn transformation. (Photo: Brad Fickeisen on Unsplash)

SWANN: Right, so there's been a lot of work since the original findings came out. And I think that we understand a lot more about what some of the limitations were of those original studies. But the sort of premise still exists that the Amazon will be experiencing a very unseen climate – or, unseen in any sort of human timescales. Maybe if we go back to the time of dinosaurs, there were temperatures that were that high, but that this is a really new or novel climate that the Amazon will be experiencing. And there's a real question as to what that forest will look like. I think there's less of a thought that it would collapse completely into a grassland, but still a lot of questions of if it will be able to maintain as many trees, or as high of a biomass, or as high of a biodiversity as it does now.

BASCOMB: Abigail Swann is an Associate Professor in the Departments of Atmospheric Sciences and Biology at the University of Washington in Seattle. She spoke with Living on Earth’s Steve Curwood.

About Abigail Swann’s Ecoclimate Lab at the University of Washington