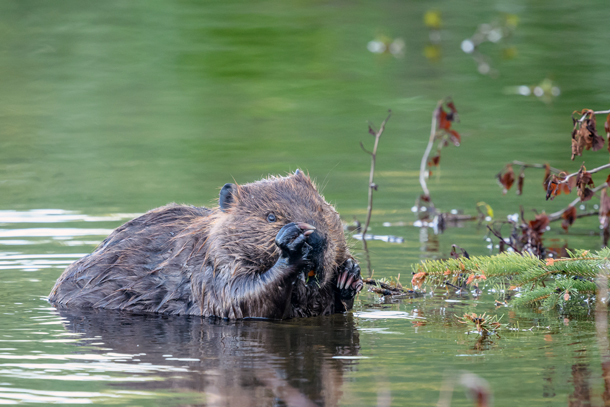 Because they build dams that shape the very environments in which they live, beavers are a classic example of a “keystone species”. (Photo: Becky Matsubara, Flickr CC BY 2.0)

Until recently, biologists assumed that beavers occupied freshwater ecosystems only. But scientists are now studying beavers living in brackish water and how they help restore degraded estuaries and provide crucial habitat for salmon, waterfowl, and many other species. Journalist Ben Goldfarb speaks with Host Bobby Bascomb.

BASCOMB: The eager beaver is an extremely effective engineer of its environment. Beaver dams hold back water that can be a nuisance to homeowners, but they create a complex system of ponds and wetlands that are a haven for numerous plant and animal species.

BASCOMB: On a recent winter morning I went to look for the tell tale signs of the iron toothed rodents at a pond near my home in New Hampshire. I enlisted the help of my 4 year old daughter, Sage, to find, as she calls them, beaver trees.

A thin layer of ice blankets the network of ponds, streams, and wetlands in the frigid woods.

SAGE: I found a beaver tree!

BASCOMB: How do you know that’s a beaver tree?
SAGE: Because it chewed all the way down. Ok, let’s keep going to see more. 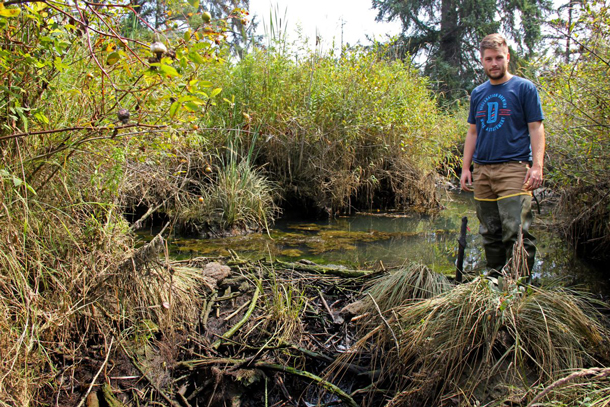 David Bailey, a biologist with the Tulalip Tribes, stands next to a beaver dam exposed at low tide on the Snohomish River in Washington State. (Photo: Ben Goldfarb)

BASCOMB: Well, we found our “beaver trees” right where you might expect: near a freshwater pond. But scientists recently discovered that beavers are also happy to live in the brackish mix of fresh and salt water in coastal areas. And just as they help restore freshwater ecosystems, beavers could also hold the key to restoring damaged coastal wetlands. Journalist Ben Goldfarb wrote about saltwater beavers for Hakai Magazine, and he joins me now. Ben, welcome back to Living on Earth!

GOLDFARB: Thanks for having me again.

BASCOMB: So first, Ben, how surprised were you to find out that there are saltwater beavers? I mean, you're a self-described beaver believer. You wear beaver t-shirts, you wrote a book about beavers, I mean, you know a thing or two about beavers. How surprising was this?

GOLDFARB: Yeah, it was definitely surprising. I think that I and, you know, and all beaver biologists knew that beavers occasionally would swim into saltwater, you know, they dispersed from the mainland to islands in some places. Sometimes they'll go out to the mouth of the river, hang a right up the coastline and travel up aways looking for the next river mouth to go up into. But I think it's just really within the last several years, thanks in large part to this guy, Greg Hood, a scientist who works in the Skagit river in Washington, that we've begun to understand that they're not only using saltwater to disperse. They're actually living full-time in these intertidal estuaries and are actually doing all kinds of really interesting engineering and architecture and are playing this really important ecological role in saltwater ecosystems.

BASCOMB: You actually went to visit one of those beaver lodges on this Snohomish river in Puget Sound. Can you describe that? What was it like there?

GOLDFARB: Yeah, it's a really amazing place. So it's basically this kind of vast intertidal estuary and the beavers are building in these kinds of tidal channels. So there are basically, it's kind of this huge salt marsh that's scored with these little freshwater channels that fresh water comes down in. But then when the tide comes up twice a day, those fresh water channels are completely submerged, they're inundated. So it's this really dynamic ecosystem with the tides are just going in and out all the time. And beavers are actually building in there. So they'll build these dams that when the tide comes up, the dams are actually completely submerged under water, you could kayak over the top of one of these dams and have no idea that they were beavers building there. And then when the tide goes out again those dams suddenly reemerge, essentially, and now they're holding back these pools of water in these intertidal channels, so it's almost like the beavers are anticipating these tidal fluctuations and are accounting for them in their construction, and in this really sophisticated way. 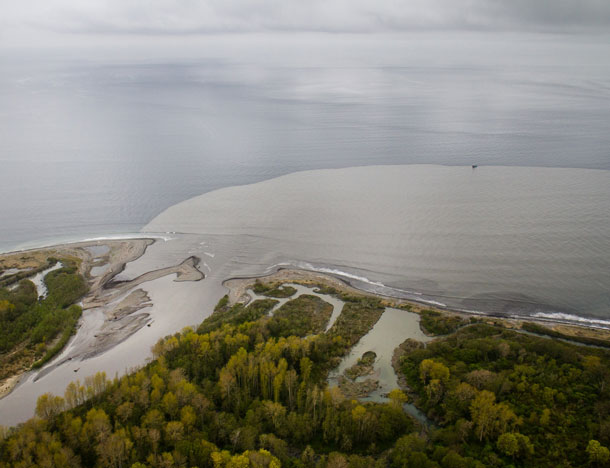 The sediment-rich waters of the Elwha River flow out into Washington State’s Strait of Juan de Fuca. The removal of two dams on the Elwha River from 2011 to 2014 restored sediment flow in this important salmon-bearing river. (Photo: John Felis, USGS, Public domain)

BASCOMB: Wow, that is sophisticated. I mean, that's Army Corps of Engineers-level engineering, I think.

GOLDFARB: Totally, except better for the environment than the Army Corps, you might argue [LAUGHS].

BASCOMB: [LAUGHS] Yeah. So you got there and you found this extraordinary feat of engineering, really, by these beavers. And how do their dams in these intertidal areas affect the ecosystem around them? What kind of habitat are they creating?

GOLDFARB: Yeah, that's a great question. So most of what we know about how important these habitats are comes from Greg Hood, who did a lot of intertidal beaver research on the Skagit River, which is another river in Washington where beavers sort of occupy these intertidal areas. And basically what Greg found is that these are enormously important, these beaver construction sites, are hugely important for juvenile salmon, especially. You know when the tide goes out, those fish would get flushed out into these estuaries where they're really at risk of being preyed upon by larger fish, by birds. That's a pretty challenging habitat to be a little finger-length salmon in. But at low tide because beavers are holding back these deep pools of water they're creating these fantastic refuges essentially for juvenile salmon, that are deep enough that birds like great blue herons can't really get in there to prey on the juvenile salmon. So it turns out, Greg discovered, that baby salmon were three times more abundant in these beaver pools than in other habitat. So clearly they're just creating these fantastic salmon refuges, which is something that we knew that beavers did in fresh water. But we didn't realize until Greg's research a few years ago that they were also playing this same role of creating these salmon refuges in the estuaries as well.

GOLDFARB: Yeah, and I think that again, in freshwater streams, you know, beavers are already being considered this crucial keystone species for salmon recovery. There are so many beaver restoration efforts here in the Pacific Northwest where I live aimed at getting beavers back in these streams and basically creating salmon habitat. There are so many scientific studies that have been published basically showing that beavers dramatically help the survival of juvenile salmon. So that sort of pro-beaver work is already happening in much of the Northwest. You know, a lot of it's catalyzed -- we, you know we saw this past year just how badly the Southern Resident killer whales are doing, the orcas in Puget Sound, and they're essentially starving because there's just not enough salmon for them to eat. And there's this renewed focus I think on creating salmon habitat to feed both the whales and of course ourselves, and beavers are a part of that solution and it might turn out that estuary beavers are a part of the solution as well.

BASCOMB: Wow. So help the beavers, help the whales?

BASCOMB: By helping the salmon, it's all connected. Now, you write about how beaver ponds can help restore degraded coastal wetlands. And there's clear evidence for that in removal of dams on the Elwha River in Washington State. Can you tell me about that, please?

GOLDFARB: Yeah, so the Elwha is a fascinating story. So the Elwha's a river on the Olympic Peninsula. And these two enormous dams had basically been there since the 20s I think, just trapping enormous amounts of sediment and blocking salmon runs. It was sort of this environmental disaster. And, you know, a few years ago the government actually bought those dams and -- thanks to pressure from native tribes -- and removed the dams, and opened up this huge amount of spawning habitat for salmon, so now salmon are swimming up river, past the former dam sites. But the kind of, the amazing outcome for beavers was that by breaching those dams we essentially unlocked this huge pulse of sediment, that had been trapped in the reservoirs and all this sediment just rushed downstream and basically settled at the mouth of the Elwha River. The river mouth had been starved of sediment for so long that it basically just flowed straight into the ocean. There was no real estuary there. Suddenly there's this huge beach and sandbar complex, about 100 acres of new habitat. And in the course of writing this article, I went out there and walked around on the kind of the Elwha floodplain, essentially, at the mouth of the river. And just everywhere you see cut willow and alder, and cherry; beavers are really going into town in there. And by creating burrows and canals and dams, they're just creating this amazing habitat complexity. They're just opening up lots and lots of little spaces for all kinds of salmon and trout and other fish to live in. 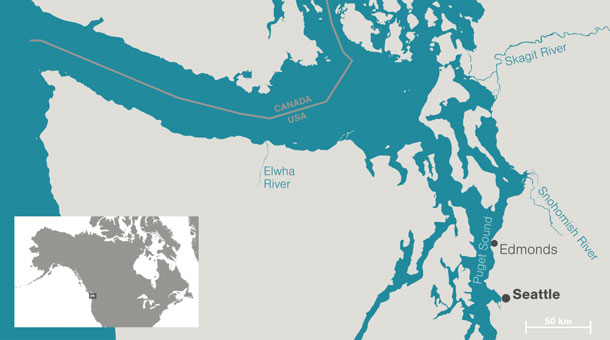 The mouths of the Elwha, Snohomish, and Skagit Rivers in Washington State provide important saltwater habitat for beavers, salmon, and many other estuarine species. (Photo: Illustration by Mark Garrison)

BASCOMB: Now you've written a whole book about how people are increasingly seeing beavers as hydrological saviors in freshwater ecosystems. What do you think it will take for them to gain that same recognition in their coastal contributions?

GOLDFARB: Yeah, that's a good question. I think that part of the issue is that we've lost so much of this coastal habitat here in Washington. These intertidal ecosystems are some of the first places that when colonists arrived, those habitats were essentially drained and converted into farmland, and we've lost about 95% of these kind of intertidal shrub-lands where beavers are so important. So I think that the first thing that has to happen is just a broader recognition of the, kind of the historical role of these intertidal ecosystems in producing salmon. And then once we've acknowledged that this habitat is so vital, then we can sort of start talking about how important beavers are there. Most of this research is sort of focused on beavers' role in tidal ecosystems in Western Washington, but are they playing a similar role in salt marshes in New England, or in the Carolinas, where beavers are really abundant, and where there are lots of salt marshes? We've lost so much of this intertidal habitat and we've lost so many beavers that, I think we've really lost a lot of these ecological linkages.

BASCOMB: Ben Goldfarb is author of the book "Eager: The Surprising, Secret Lives of Beavers and Why They Matter." He wrote about saltwater beavers for Hakai Magazine. Thanks for taking the time with me, Ben.

GOLDFARB: Thanks again for having me back.

A previous Living on Earth interview about beavers with Ben Goldfarb