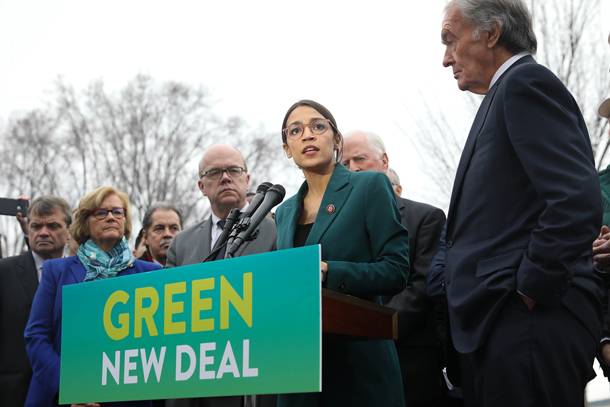 The Green New Deal resolution recently introduced to Congress by Rep. Alexandria Ocasio-Cortez (D-NY) and Senator Ed Markey (D-MA), calls for the U.S. to quickly decarbonize its economy. The resolution does not mention of carbon pricing, despite much interest among economists for carbon pricing, such as taxes, fees or cap-and-trade regimes. Stephen Stromberg, an editorial writer for the Washington Post, talks with Host Steve Curwood about why the Post urges that any Green New Deal put a high price on carbon rather than impose government mandates to encourage decarbonization.

The Green New Deal resolution recently introduced by Congresswoman Alexandria Ocasio-Cortez of New York and Senator Ed Markey of Massachusetts, both Democrats, has attracted a lot of attention for its bold proposals to transform the U.S. economy. Many like its calls for moving to a 100% carbon-free electric grid in just ten years, as well as for a federal jobs guarantee and healthcare coverage for all Americans. But the AOC-Markey Green New Deal Resolution has also attracted criticism for going too far and being politically untenable. And some point out that their Green New Deal doesn’t even mention strategies like putting a price on carbon. The Washington Post Editorial Board recently laid out its argument for a Green New Deal that includes carbon pricing and stops short of broad progressive goals. Stephen Stromberg of the Washington Post authored the editorial. Steve, welcome to Living on Earth!

STROMBERG: Thanks for having me.

CURWOOD: Let me ask you this, how do you explain carbon pricing not being in the Green New Deal?

STROMBERG: So it's a very good question, because when you look at Ed Markey, for example, one of the co sponsors of the resolution, he co sponsored a carbon pricing bill in 2009, 2010, the Waxman-Markey carbon pricing bill, it was the premier global warming climate change legislation of the Obama era. It didn't pass. So there's been some hand wringing among environmentalists about the political attractiveness of a carbon pricing type program. On top of that you also have some who for a long time have been wary of carbon pricing, either through a carbon tax or a cap-and-trade program like California has, for a variety of reasons. Some people are more skeptical of market-based mechanisms and they prefer government mandates, and that's for sort of ideological reasons. Some people feel as though carbon pricing won't be effective enough in spurring research and development. And some people don't like the idea that companies would be able to pay to pollute, that it's not punitive enough, that pollution should not be something that you just get a fee for, but something that society should be saying is a shame, a problem. We accept that that's one way to look at it. But another way to look at it is, actually what it's doing is it's ramping down carbon emissions over time, it's doing so in a cost effective way, it's marshaling every dollar to its highest benefit. So if you can get over the discomfort of this appearance that companies are paying to pollute, what in fact you get is a highly effective, highly efficient system to get very far and in fact, we think where you need to be to fight climate change.

CURWOOD: Now, there's a common criticism about carbon pricing, and that's if it's not implemented well, it can perpetuate economic and public health inequities. That coal fired power plant next to a low income neighborhood that pays to continue its emissions means that people there are still going to breathe lousy air. How do you make sure that carbon pricing doesn't perpetuate economic and social inequities?

A carbon fee and dividend program, like the one recently introduced to Congress by Rep. Ted Deutch (D-FL), would return some or all of the money gathered to U.S. citizens. (Photo: Felix Jörg Müller, Wikimedia Commons CC BY-SA 4.0)

STROMBERG: Yeah, that's actually a very good point. And I should have said, that's another one of the reasons that there has been some skepticism around the carbon pricing type programs. So you have to do a few things. In any carbon pricing system, you're going to end up with revenue, the government will end up with revenue. And so one of the big questions is how you spend it, how you use it. And a slice of that revenue undoubtedly has to be spent on helping particularly low income people cope with the transition. So what that looks like is it could be rebates directly to Americans. It could be pumping up the earned income tax credit, which is a credit for the working poor. It could be a variety of other ways to feed back, recycle back, this revenue back into Americans' pockets. And this does a couple of things. One thing is it makes sure that low income, middle income, even some high income people who will be paying more in energy prices, in prices at the pump, will not be harmed by the energy transition. In fact, there's been study after study showing that people can be made whole if not better than whole, if you have this type of rebates system. Now, you bring up another point though, which is that if coal plants continue to produce emissions or other type of polluting industries continue to be able to do what they're doing, they'll also produce ambient pollution that's unhealthy for people. That's a substantial problem. So in the ambitious scheme we're talking about we're not talking about a small price on carbon, we're talking about a substantial price on carbon, a higher price on carbon than we've seen anywhere else before. One that would be much more effective at really fighting the coal industry and making it less and less economical, not to mention other industries that produce carbon emissions in various ways.

CURWOOD: And one of the themes of the Green New Deal is that massive public investments are needed for big mandates like high speed rail, for example. Your essays in the Washington Post editorial page say that's a bad idea.

STROMBERG: Yeah, we single out high speed rail, in part because of the spectacular failure that you just saw in California on the high speed rail front. And despite this, it's still in the resolution as an important piece of the Green New Deal goal, which, to us signified an insensitivity to the lessons of recent government waste. That's what we're really worried about, is this idea that the government will spend a large amount of money, will muster man-hours and resources toward projects that seem like they might help in this really important fight, but then they end up not helping. High speed rail is just one example. All that said, we believe that there does need to be in some cases direct government spending and intervention beyond a carbon pricing plan. So for one thing, we believe that local public transportation, you need to provide good alternatives, reliable alternatives to cars, and the government has to provide that, particularly for the low income who can't afford just to Uber everywhere or something like that, or can't afford to pay higher gas taxes. You need to provide research and development funding much more than what we're doing now, so that you can develop the technologies that are going to get us out of this carbon rut. You need to provide efficiency standards so that appliances and cars will get more efficient. A carbon pricing program would do some of that but it wouldn't get you as much efficiency as you might need. You get greenhouse emissions in cement making, in some other industrial processes; you'd have to have some kind of response to that, tailored to each of these sectors. So there are gaps in a carbon pricing system. You do have to have some willingness to set mandates, some willingness to spend money, just, we believe that that shouldn't be the first impulse. That should be sort of the backup impulse after you've put carbon pricing system in place.

CURWOOD: Stephen Stromberg is an editorial writer for The Washington Post's opinion section. Steve, thanks so much for taking the time today.