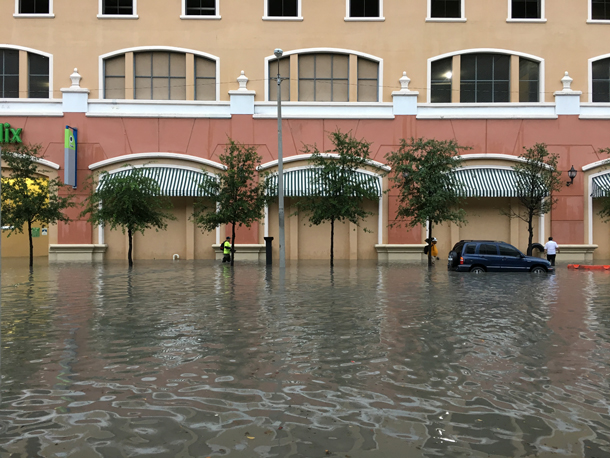 Nuisance flooding is taking a toll on property values in coastal cities such as Miami, Florida. (Photo: Phillip Pessar, Flickr CC BY 2.0)

Climate change is stoking losses everywhere from the recent floods in Southern Africa to the flooding in the US Midwest. Rising sea levels have also wiped out $16 billion in property values from 2005 to 2017 in the Eastern US, a recent study has found. In the affected coastal communities, homes in danger of high-tide flooding sell for less, compared to homes on higher ground. Nicholas Kusnetz, a reporter for Inside Climate News, joins Host Steve Curwood to discuss how this inevitable economic decline could eat away at local tax bases, devastating coastal communities further.

CURWOOD: It’s Living on Earth, I’m Steve Curwood. Climate change is making weather catastrophes worse, including the killer Cyclone Idai that came ashore March 14 in Beira, Mozambique. Winds of more than 100 miles an hour and a twenty-foot tall storm surge flooded 90 percent of the buildings, decimating this coastal city of about a half million people. The BBC had a reporter on the ground.

REPORTER: We’ve been traveling through areas devastated by the force of this storm. Every single street that you go down, houses that have literally been blasted away by the force of the wind, inundated with water. People coming out to us begging for food, fresh water. There’s no electricity here and a great shortage of any of the basic necessities of human life.

CURWOOD: Beira was the first part of Southern Africa to be hit hard, but as the storm moved west intense rains and high winds ravaged other parts of Mozambique, Malawi and Zimbabwe. 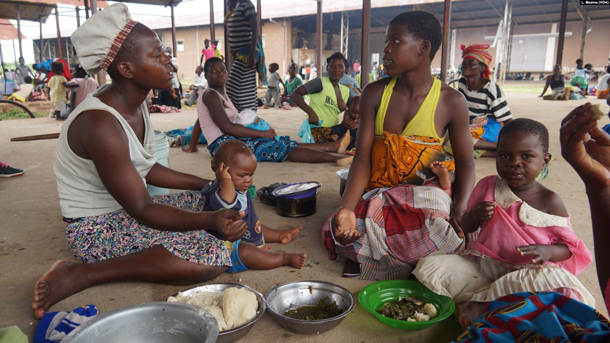 Cyclone Idai and the resulting damage have resulting in a death toll of hundreds of people, and has displaced thousands more, including these people in the Bangula evacuation camp in Nsnje, Malawi (Photo: L. Masina, Voice of America, Wikimedia Commons, Public Domain)

The UN says this is one of the worst weather-related disasters ever to hit the Southern hemisphere. The millions of people in these poor countries are ill-equipped to handle the dire aftermath, and death tolls are unknown but likely to be in the thousands.

And at the same time halfway around the world a so-called “bomb-o-genesis” storm and spring melt unleashed record flooding in the Midwestern US, centered in Nebraska.

REPORTER: This morning from Nebraska to Wisconsin, historic river flooding from rapid snow melt and ice jams, leaving at least 2 dead and 2 missing. In Nebraska the destruction wide-spread, roadways completely crumbled. The force of the water so strong it took out the Spencer Dam, causing an 11-foot wall of water to devastate 3 surrounding counties. And rivers cresting at historic levels. In Waterloo the Elkhorn River breaking its 1962 record, swelling over 17 feet in just 5 days. 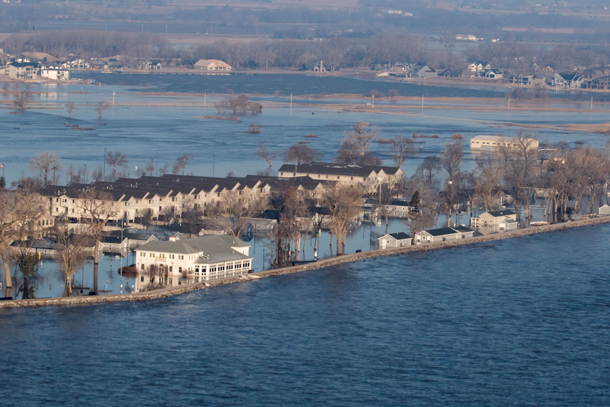 Camp Ashland, Nebraska was one of the Midwestern towns inundated by flooding in the past number of weeks. (Photo: Staff Sgt. Herschel Talley, Nebraska National Guard, CC BY 2.0)

CURWOOD: The flooding could actually be seen from space and prompted a state of emergency declaration in Nebraska, where 74 cities were inundated with flood waters. Countless homes and farms were damaged and livestock were lost. Rising surface temperatures linked to climate disruption make these storms more intense and destructive, leading to billions of dollars in damages. Sea level rise can be less dramatic, but in coastal areas it is also taking a financial toll that concerns property owners.

New research finds the values of coastal homes in flood prone areas in the US are taking a hit, with homeowners getting less for properties in danger of high tide flooding, the First Street Foundation reports. From 2005 to 2017, their study found nearly $16 billion in coastal property value has already been lost from 17 states on the East coast, and the seas keep on rising.

Nicholas Kusnetz is a reporter for Inside Climate News. He joins us now. Nicholas – welcome to Living on Earth!

KUSNETZ: Hi, thanks for having me.

CURWOOD: First, explain, what is nuisance flooding and how does that affect property values?

KUSNETZ: Nuisance flooding is the kind of recurrent flooding that happens along the coast in a lot of tidal areas where high tides will spill over the banks and creep into neighborhoods. And nuisance flooding has been occurring much, much more frequently over the last few decades, as sea levels rise.

CURWOOD: So how does this affect property values?

KUSNETZ: First of all, it's as the name suggests, it's a nuisance. When roads flood, people have trouble getting to work. People have trouble getting around their neighborhoods. But it also causes a lot of damage, it can damage cars, it can creep into homes, and ruin lawns, and basements, and require a lot of work to protect the homes too. In a lot of areas that are more vulnerable people are even raising their houses, elevating them up above the flood zone. So there's a lot of costs that it can impose on people who live in these areas.

CURWOOD: How does that get reflected, then, in the overall price of a home, and also the aggregate price, where a city might be looking at its tax base?

KUSNETZ: An organization called the First Street Foundation has been publishing some analysis on this. They have compared data on sales of property in neighborhoods with flooding to similar homes, neighborhoods that don't have flooding. And what they found is that, on average, the value of homes in flooded neighborhoods is not keeping pace with their drier neighbors. So people are paying less for these homes. And, across the East Coast and down into Alabama and Mississippi, they found that over the past decade or so, in total, that equates to almost $16 billion in losses for homeowners.

CURWOOD: So, what are some of the potential consequences of this in terms of the tax base?

KUSNETZ: Well, for a lot of cities and towns, I think most cities and towns, one of the leading sources of revenue is property taxes. This is a big looming problem for a lot of coastal communities, particularly smaller ones, where the areas that are flooding is a bigger percentage, just of the area of the town. City governments are thinking about this, and they're trying to figure out how do we get out ahead of this? I mean, we need to protect our coastal areas. But we also don't want to send people running, selling their homes and sending property values crashing, because that could then undermine our ability to protect the areas, to come up with the revenue needed to build sea walls and fund adaptation measures.

CURWOOD: You know, many American homeowners are paying mortgages, how does that figure into all of this?

KUSNETZ: Well, Freddie Mac, the federally backed mortgage bank, actually warned about this potential problem a few years ago. Back in the 2008 housing crisis, part of what happened was that property values dropped, and they dropped, for many people, below the amount that they owed the bank. And then people decided I'm not going to continue to pay this mortgage. I mean, it makes no sense for me. So, unlike then, when there was maybe some hope of property values coming back up, if my home value's dropping because of rising seas, there's a pretty safe bet that it's not going to go up. And so that starts to happen in some coastal areas, and people start deciding not to pay their mortgages. It could lead to mortgage crisis, localized, even regional, where basically, mortgages start going under, and it can cause real problems for, not just for homeowners, and the banks, but then for cities as well, with the kind of blights in certain neighborhoods where, you know, you have abandoned homes that we saw in the last crisis. 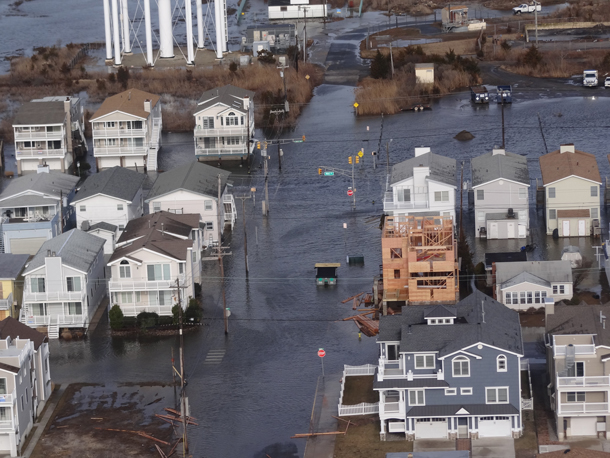 Ocean City, New Jersey, showed the greatest loss in property value between 2005 and 2017, with the resort town losing about $500 million, according to the analysis from First Street Foundation. (Photo: Flickr CC)

CURWOOD: Looking back to Katrina, for a moment, there were folks in the Lower Ninth Ward who'd worked all their lives to pay off their homes. And when they got flooded out, and the homes are pretty useless, they felt like they were holding the bag, those folks whose homes were mortgaged to the hilt just kind of dusted their hands off, and walked away.

KUSNETZ: It's interesting, you brought up New Orleans and Katrina. A lot of people I've talked to point to New Orleans as an example of some of the bigger issues we're talking about where sea level rise can start to undermine a city's tax base and wellbeing. I mean, after Katrina, the population of the city was cut by a dramatic amount. And a lot of people went to Houston, other cities, and didn't come back and the city really struggled to get back on its feet as a result of that. So that's the kind of thing that you could see in a lot of other cities.

CURWOOD: Okay, so what steps can coastal governments take, then, to protect their land and residents? What can they do? 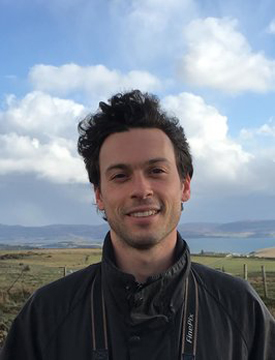 KUSNETZ: Well, there’s a few important things to remember. I mean, first of all, even if we were to stop emitting greenhouse gases today, the seas would continue to rise. So, this problem would continue to get worse. So, there's a certain amount of this baked in because of what we've already admitted. That said, there is a lot that cities and towns can do, from the local all the way the federal level. I mean, one thing, they need to stop building in vulnerable areas. Any new development there is a problem that we're going to have to deal with down the road. But they also need to re-examine, you know, how they finance local governments, I mean, cities that are relying on coastal property values, particularly, beach towns and resorts where this is their main source of revenue, they need to start thinking about, okay, well, how do we replace this, and slowly moving to something so there isn't some kind of shock. There's also programs that can be put in place to provide incentives to homeowners in the short term to protect their homes, and in the longer term, to move out of these areas. There's buyouts, and the federal government does have programs like this, a lot of it is funded through FEMA. And there's the National Flood Insurance Program which is the primary insurer for most people in flood zones. So, that program, as it's structured now, a lot of the time, just provides incentives for people to build back just as they had been after a storm for example. So, Congress could look at that program and start to restructure it so that it encourages people to move away, and when they do build back, to build back higher and stronger, and to provide money to help people move out of these vulnerable areas.

CURWOOD: Nicholas Kusnetz is a reporter for Inside Climate News. Nick, thanks for taking the time with us today.

KUSNETZ: Yeah, it was my pleasure.

Read the report from the First Street Foundation