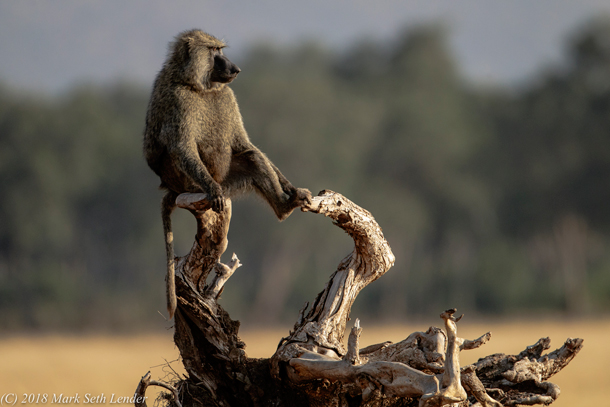 We are closely related to the primates. The great apes look like us; so do the monkeys even though they have tails. Watching an alert olive baboon in the marshes near Kenya’s Mara River, Living on Earth’s Explorer in Residence Mark Seth Lender has come to believe this resemblance has to do with something more than physical appearance alone.

CURWOOD: We are closely related to the primates. The great apes look like us, so do the monkeys even though they have tails. Watching an alert olive baboon in the marshes near Kenya’s Mara River, Living on Earth’s Explorer in Residence Mark Seth Lender has come to believe this resemblance has to do with something more than physical appearance alone.

LENDER: The river bends back and back and back upon itself. A ribbon, tangled in the narrow fabric machinery. And then there are the woods. And then the dried-out grasses, cropped low. And the dead trees. And the marshes, spread like spores, lying dark and wet and tangled with reeds.

On one of the dead trees toppled long ago by elephants, there sits a baboon.

The roots of the tree like an overlarge Victorian chair, suit him. He is comfortable there. As if it was made for him. His back is upright. His aspect… thoughtful. An arm drapes past his knee. One hand holds to the smoothed knob of wood that forms the seat. One foot is placed conveniently on the footrest below him. With the benefit of an unobstructed view his bright eyes, unblinking, look wide and far. He turns his head, all the way left, he turns his head, all the way right. Then straight, towards the marshes. Then leans, cocking head, neck, torso to the side as if trying to see past some obstruction. And to the right again. 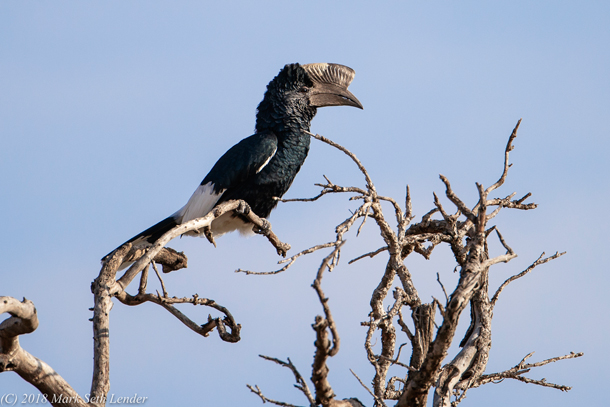 The Black and White Hornbill perches in a dead tree, on the lookout for danger. (Photo: Courtesy of Mark Seth Lender)

The woods behind him he all but ignores (they only merit a glance), this even though there are leopards there, to a certainty. Even though leopards are his lethal enemy. Mostly they hunt at night; he is depending on that.

But there are also lions. Many lions. And they have no use for quotidian conventions. Ensconced amid the constant certainty of lions and the hidden certainty of leopards, the baboon also relies on the open space between him, and them, and in particular that his eyes are not the only ones watching... 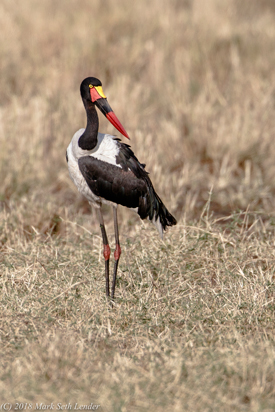 At a distance from the baboon a black and white hornbill sits among the gnarled limbs of a leafless tree, and preens himself. His bill is half the length of him, curved like the sheath of some exotic sword. It tucks and strops the feathers of his wings, the bill folded flat along his back. But one black eye stays open. And keeps watch. Not just up, towards where the great danger might be, some unseen bird of prey that comes soundlessly from the blind direction of the sun. But also, he looks out.

A saddle-billed stork, his black and red and yellow beak like a soldier signaling in semaphore, stands to, ready and alert.

Likewise the black-headed heron high in the uppermost branches where he roosts, and waits, until some signaling device of his own tells him: “Spread your blue wings: Now leap!”

For the birds as for the baboon it is about more than what is there. It is making sure about what is not there. Whether they intend it or they don’t they watch for themselves and also for each other.

The baboon is the last to leave. He climbs down from his chair, grasping with hands and feet. And on all fours walks away. What seemed familiar about him now dissipates; but not very much. 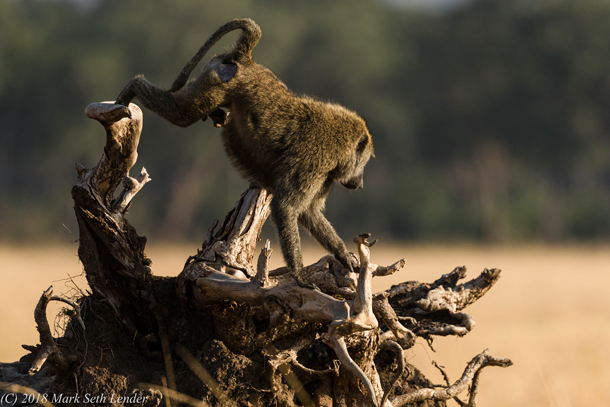 The Olive Baboon disembarks from his post once he is ensured that there is no danger afoot. (Photo: Courtesy of Mark Seth Lender)


More about the Olive Baboon

Information on the Black and White Hornbill

Find out more about the Saddle-Billed Stork

More on the Black-Headed Heron