Prepping for the City Nature Challenge 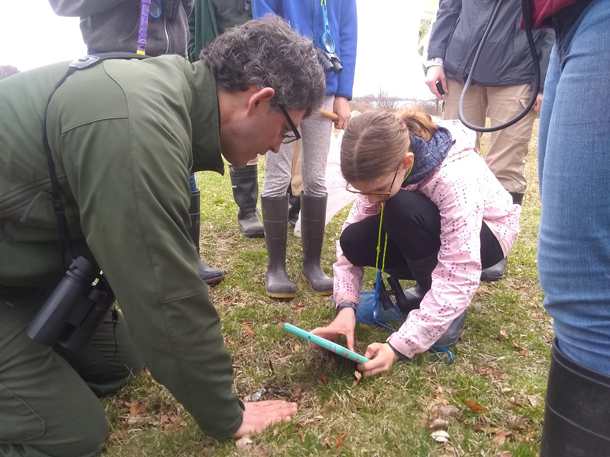 The first observation made on the trip to Thompson Island was made by Marc Albert of the National Park Service. The exciting find was coyote scat, but that didn’t stop the girls from getting up close to photograph it for iNaturalist. (Photo: Courtesy of Colleen Hitchcock)

The City Nature Challenge is an international contest known as a bioblitz - a brief, intensive survey of biological diversity over a set area and time. With a handy smartphone app, anyone can participate by cataloging the nature in their neighborhoods. The Boston BioBlitz Initiative for Girls took a trip out to Thompson Island in Boston Harbor to practice their observational skills before the competition begins.

CURWOOD: Starting April 26th, thousands of people in hundreds of cities around the world will be participating in the City Nature Challenge, organized by the California Academy of Sciences. The event is what’s known as a bioblitz - a brief, intensive survey of biodiversity over a set area and time. Participants use their mobile devices to photograph the nature in their neighborhoods. The photos are then uploaded to an app called iNaturalist, where experts help identify every observation made. The data collected is available to any scientist for research. To practice their observational skills before the challenge, the Boston BioBlitz Initiative for Girls took some girls aged 12 to 15 to Thompson Island in Boston Harbor where they found some surprising evidence of local animals.

VOICE #3: Someone should photograph that!

VOICE #3: And I know this is poop, but it’s mostly hair of animals, so I’m going to touch it with the sticks. I’m just trying to show that there’s bones in here, which’ll make it clear that it’s probably not a dog.

VOICE #3: Bone in the poopy! And look at the photo she was able to take using the
magnifying lens.

VOICE #7: So you have coyotes on the island?

VOICE #1: They appeared here just a few years ago, just a male and female adult that came over, so we have a land bridge that opens up at low tide. So they made their way over, and then they had pups, so they had pups here. And so now we have a family, a grown-up family, that lives somewhere around here. They stay pretty much to themselves.

CUROOD: The City Nature Challenge will take place around the world from April 26 to 29 and it’s not too late to get involved. Anyone with a smartphone has the needed equipment, and you can find out how to participate on the Living on Earth website, loe.org.

Learn more about the Bostion BioBlitz Initiative for Girls