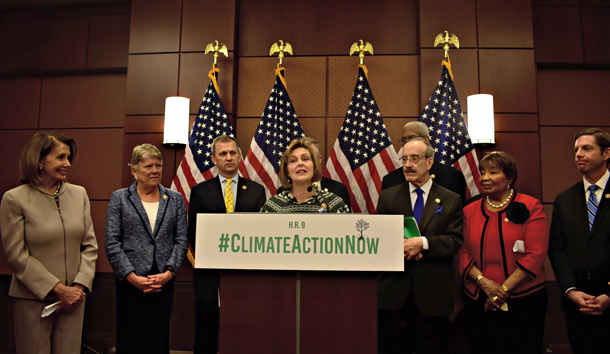 The US House of Representatives has passed a landmark bipartisan bill in the fight against climate change. The Climate Action Now Act, H.R. 9, calls for President Trump to make a plan for how the U.S. will keep its commitments under the Paris Climate Agreement, and also prevents the President from using federal funds to pull the U.S. out of the agreement, as he has vowed to do. Three Republicans joined all present Democrats as affirmative votes for the final tally on May 2. Congressman Frank Pallone Jr. (D-NJ), Chair of the Committee on Energy and Commerce for the House, spoke with Host Steve Curwood about the Climate Action Now bill, and where the House plans to go from here.

The United States blocked an official joint communique of the eight nations of the Arctic Council on May 6th by opposing any mention of the dangers of climate change. In fact US Secretary of State Michael Pompeo told the Council he welcomes a warmer Arctic because “steady reductions in sea ice are opening new passageways and new opportunities for trade,” adding that “Arctic sea lanes could become the 21st century Suez and Panama Canals.” It’s all part of the Trump Administration’s efforts to deny the urgency of the climate crisis and its intention to back out of the 2015 Paris Climate Agreement. And though the Republican President and Senate majority continue to oppose climate action, the Democratic majority in the House of Representatives recently passed a bill called the Climate Action Now Act to keep the US in the Paris deal. Representative Frank Pallone Jr. of New Jersey is the Chair of the House Committee on Energy and Commerce, and he joins me now -- welcome to Living on Earth!

PALLONE: Oh, thank you, Steve, glad to be on your show.

CURWOOD: Tell me, what was the driving force behind the Climate Action Now Act? What does it call for, exactly?

PALLONE: Well, basically two things. One is that no money will be spent to withdraw from the Paris Agreement, which doesn't actually happen, or can't happen, I should say, until November of 2020. And then the second thing is to call upon the Trump administration to put together a plan to meet the goals of the Paris Agreement. Of course, all this is, by way of background, where the President has said that he wants to withdraw. And the President is repeatedly sabotaging any efforts that have been put in place by the federal government to meet the goals of the Paris Agreement, you know, weakening the Clean Air Act, weakening the Clean Water Act, trying to get rid of fuel efficiency standards, you know, the list goes on. 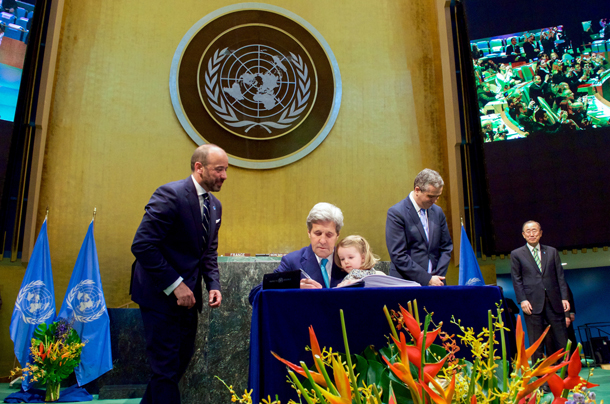 The Paris Agreement was adopted within the United Nations in December of 2015, with 195 members signing onto it on Earth Day, 2016. The United States was represented by John Kerry, then Secretary of State. President Donald Trump has said he intends to withdraw the United States from the Agreement at the earliest possible moment, in 2020. (Photo: US Department of State, Wikimedia Commons, Public Domain)

CURWOOD: Now, the Senate Majority Leader, Mitch McConnell, has said he's not going to consider this bill. So what are the prospects that you could take the provision, especially prohibiting the administration from spending any resources on withdrawing from Paris, and put that on some sort of budget measure, something that the Senate would have to consider?

CURWOOD: And what's your position on that?

PALLONE: Well, I mean, that's fine. But I mean, you know, I assume that since McConnell and the Republican leadership in the Senate continue to be climate deniers, they're, you know, they're going to take the position that they don't support the Paris Agreement. But we'll see. You know, we have to do what we can in a bipartisan way, and then we have to try to push the Republicans a little further. So it can certainly be something that we say, look, this is important. And it'll be part of the appropriations process. That's certainly an option.

CURWOOD: Now, from your perspective, what is the importance of the United States staying in the Paris Climate Agreement?

PALLONE: My fear, Steve, is that, you know, every other country is moving towards meeting the goals of the Paris Agreement. Now, it's voluntary, so there are various degrees, some are better than others. But we traditionally would take a leadership role in these things. And by taking a leadership role, not only is it more likely that the other countries follow the United States' lead, and so the Paris Agreement is successful in trying to, you know, cut back on greenhouse gases and climate change. But also, we're out front in terms of an innovation economy that, you know, tries to move that way and develops new technologies and jobs that improves our economy all along. My greatest fear is that we just fall behind while everybody moves ahead. In other words, China, India, the European Union, they develop solar panels and wind turbines, and you know, they create all the jobs and their economy moves forward through these innovations. While, you know, we're in the 19th century by encouraging fossil fuels. So it's both the health and safety aspects of trying to prevent climate change. And at the same time, trying to innovate and improve your economy towards the future, rather than, you know, looking at the past. And my fear is that we just fall behind and we become the outlier and we suffer the consequence. 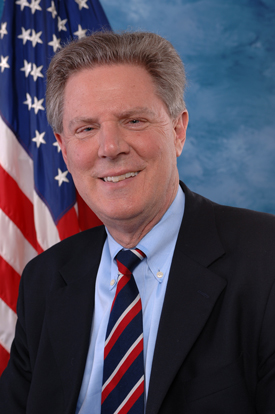 Frank Pallone Jr. has served as US Representative as a Democrat for New Jersey’s 6th congressional district since 1988. He is the Chair of the House Energy and Commerce Committee. (Photo: US House of Representatives, Wikimedia Commons, Public Domain)

PALLONE: Well, we are definitely moving forward with climate initiatives. We're hoping to do a major infrastructure bill in the next few months. And that's going to be a vehicle to do a number of initiatives. You know, for example, we had a hearing a couple weeks ago, on all the energy efficiency issues, you know, things like weatherization, improving buildings so they're more efficient, so you don't lose energy, you know, more efficient light bulbs, more efficient technology, that type of thing; weatherization. So those are the kinds of initiatives that we're going to hopefully include in our infrastructure bill, that would also cut back on greenhouse gases. And those are things we might get Republican support for.

CURWOOD: In terms of Republicans, on the Climate Action Now Act, you got three Republicans to come across the aisle; I remember back in the days of Waxman-Markey, it was a straight party line vote from the Democratic side.

PALLONE: You know, for eight years when Republicans were the majority on our committee, we weren't allowed to have any hearings or move any legislation that dealt with climate change. But as soon as we took the majority, we started having the hearings, the same Republicans were now saying, oh, we want to address climate change. We think it's important. And so what we're getting -- and this is why I think we might have some hope with this infrastructure bill -- they're not denying that climate change is human induced anymore. At least the leadership in our committee isn't saying that anymore. So there has been a change with some of the more moderate Republicans, that now they admit that climate change is human induced and needs to be addressed. So I am a little more optimistic. You know, McConnell probably won't take up, you know, H.R. 9 on the Paris Agreement. But if these things are included in an infrastructure bill, we may very well get some Republican support. They've changed in many ways, in what they articulate. We'll see what they actually do.

CURWOOD: Congressman Frank Pallone, Jr. represents New Jersey's sixth district and is Chair of the Committee on Energy and Commerce in the House. Thanks so much for taking the time with us today.

House Committee on Energy & Commerce | “E&C Chairman Pallone on House Passage of the Climate Action Now Act to Keep the U.S. in the Paris Agreement”

Listen to our previous interview with Rep. Kathy Castor (D-FL) about HR 9 here